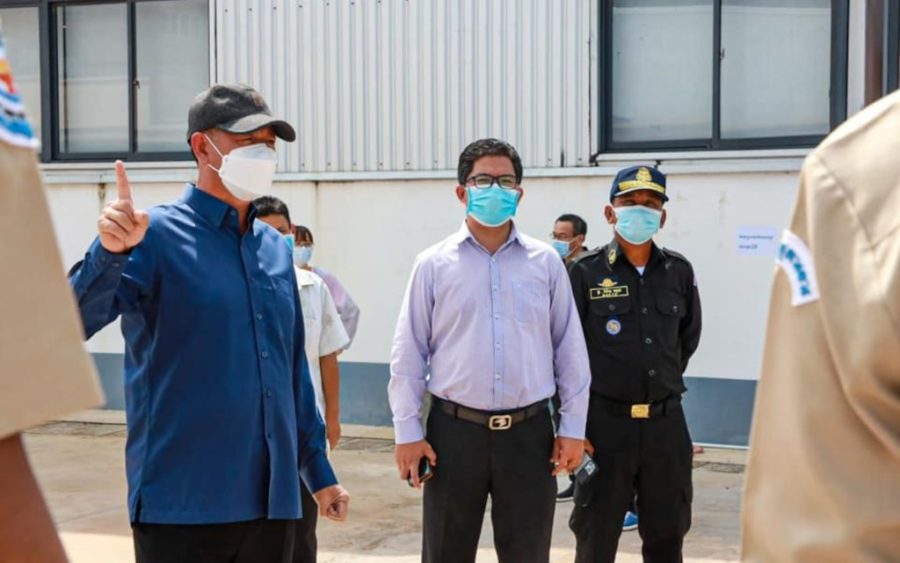 Preah Sihanouk provincial governor Kouch Chamroeun visits a special economic zone on June 1, 2021, in a photo posted to the Facebook page of the provincial administration.

At least 100 cases of Covid-19 have been reported at a Preah Sihanouk special economic zone since Sunday, with officials downplaying the outbreak which they say is smaller than previous transmissions.

The provincial government released three letters on Tuesday ordering the closure of three factories in the Cambodian Zhejiang Guoji SEZ for two weeks after Covid-19 cases were detected on Sunday.

Khean Thum, who is a polisher at one of the shuttered factories, FPZ Furniture, said there were around 140 positive cases at the factory. Some workers had shown Covid-like symptoms, prompting the testing of staff, he said.

He had heard there were 40 cases at another sofa factory, but did not know how many cases were reported at Rome Industrial leather factory and I Tao Pet Supplies, which were the two other companies ordered to close.

Thum feared getting the virus and was quarantined with his family in their rental room.

“We have no choice in this circumstance. When they checked and found infections, they closed the company, and we get 50 percent [of our wages] because the company can’t operate when there are many infections,” Thum said.

Cheav Savong, who rents rooms to workers outside the SEZ, said three of her tenants had tested positive and were sent to treatment centers. She also saw two buses ferrying suspected cases out of the SEZ.

Prey Nob district governor Sor Kakada denied there were hundreds of cases at the SEZ, saying that just over 100 cases had been detected at the industrial park. Compared to previous outbreaks, he said 100-odd cases were manageable.

“Before, there used to be much more than that,” Kakada said. “There is nothing to worry about. We are still able to control it because the authorities at all levels have experience in managing Covid in this district.”

Preah Sihanouk provincial spokesperson Kheang Phearum said the three factories were closed to reduce transmission among workers. The factories could reopen in 14 days, Phearum said, adding that he was not concerned with the new cases either.

He said the industrial park was established in 2019 and had more than 10 operational factories.

Phearum said he was unaware of the exact case count, and Lim Samean, director of the Sihanoukville provincial health department, declined to give exact case numbers and directed questions to higher provincial officials.

Ath Thorn, president of the Cambodian Labor Confederation, said there were no unions in the new industrial park and was worried that factories could neglect worker safety and well-being.

He said factories at other locations have tried to hide outbreaks, and having a union helped workers get the attention they needed.

“In case of infections, if the company does not allow you to go out or does not reveal the information, we have hotlines. They can tell unions or inform the authorities to go down to the company or we use Facebook live to let others know.”