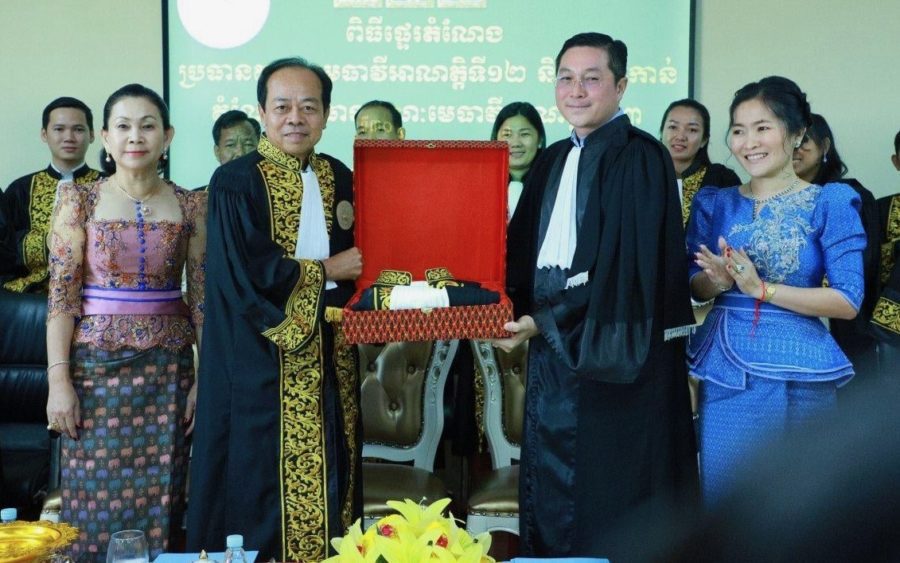 Ly Chantola, right, after winning the Bar Association election in October 2020, in a photo posted to the Bar’s Facebook page.

The Bar Association is reviewing a clarification letter from a member after he posted a message in a Telegram group: Sell 1 ballot for $1,000.

Ly Chantola, the association’s president, said on Tuesday that the Bar was reviewing the case of Phan Chansak, whose message affected the institution’s honor.

The association last week issued a statement condemning Chansak’s actions. The lawyer had posted in a Telegram group called CLO Opinions, “Sell 1 ballot for $1,000,” the association said, without specifying when the message was posted.

The act violates the ethics of lawyers with the intention of harming the honor, reputation and dignity of lawyers, the association said, linking the comment to an ongoing Bar council election.

Chantola said the Bar had since received a letter of clarification from Chansak.

“The bar will quickly check his clarification, because he posted a message in the discussion group and the message he posted was that he was announcing the sale of his vote,” Chantola siad. “Generally, an announcement like this, both under the country’s laws and the rules of the Bar, we do not allow it because it affects the honor of our institution.”

Chansak on Wednesday declined to comment, saying “the story is over.”

“It is an internal matter of the Bar, so please keep the information quiet. [I] do not comment because it is an old story for a long time,” he said.

The election of the Bar Association president takes place every two years, and a president can only serve up to two terms. The Bar council works alongside the president.

Chantola is a government lawyer who is working the treason case against opposition leader Kem Sokha, advises the cabinet, and has represented the prime minister’s son Hun Many as well as political activist Thy Sovantha.

He dominated the Bar president vote last year, receiving 1,444 out of 1,697 ballots cast, as runner-up opposition lawyer Ket Khy said he was happy to win 130 votes without “even spending on a cup of coffee” to lobby for supporters.

Chansak was a CNRP member and was recently rehabilitated and allowed to reenter the political arena after being banned in 2017. He was a lawyer on the Kem Sokha treason case.

Correction: A section of the article was missing. It has been updated.