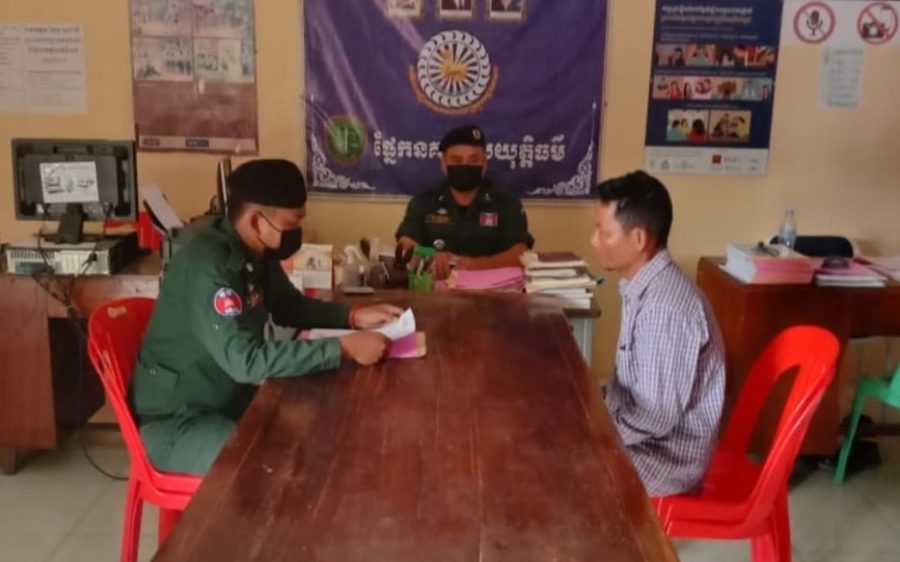 Battambang resident Khleng Chhok is questioned by the Thma Kuol district police in a photo posted to their Facebook page on February 8, 2022.

A Battambang resident was forced to issue an apology by local police for a Facebook comment criticizing the demolition of a road in his commune.

Thma Kuol resident Khleng Chhok was taken into custody on Tuesday after he commented on a Facebook post showing the destruction of an elevated road, which also functioned as a levee. The area is part of Tonle Sap’s flooded forest biosphere, and Chhok said residents used the road to get to a fishing location, according to a police report posted on Facebook.

“Isn’t it better to keep the road so people can use it to travel to find fish and meat than digging up the road like that? Doing so would be destructive,” Chhok commented on Facebook.

However, local police and a district officials’ working group summoned Chhok, the report reads, and asked him to apologize for the comment.

“After that, the district experts educated and asked Khleng Chhok, the owner of the account Sethy Sroksre, [to apologize] and sent him back to his home. Please join in protecting and maintaining the flooded forest area for fish habitat,” the report reads.

According to the police report, Chhok said, “I would like to accept the mistake that I had committed on Facebook social media … if I continue to commit the mistake, I will take responsibility and face the law.”

Chhok could not be reached for comment on Thursday.

Thma Kuol district police chief Seng Lux confirmed that Khleng Chhok had been summoned, educated and made to apologize.

He said area residents were prohibited from entering “location 3” in the flooded forest because people were trying to actively grab land. Lux said similar roads in two other communes would also be destroyed.

Officials have been scampering to reclaim cleared flooded forest land after Prime Minister Hun Sen in November ordered that all occupied land in the flooded forests around the Tonle Sap be taken back.

The controversy around Chhok’s forced apology attracted the attention of Hun Sen’s sister, Hun Sinath. In a Facebook post, she questioned the legal basis for summoning Chhok.

“I’ve studied law, but I am still unable to see what wrong that he has committed? Can those officials please go and check the Constitution and the chapter on the people’s rights and obligations,” she posted.

“Why are officials spending so much effort going after citizens rather than after the rampant illegal drug activities throughout the country?”

The police have recently forced Cambodians to issue public apologies for comments made on social media. Often these apologies are published as videos on Facebook. In 2020, authorities made a schoolgirl in Kampot publicly apologize for allegedly spreading Covid-19 fake news, revealing her identity in the Facebook video.

A Phnom Penh resident made a public confession and apology in September 2021 for allegedly insulting and cursing traffic police officers in a video posted to social media platform TikTok.