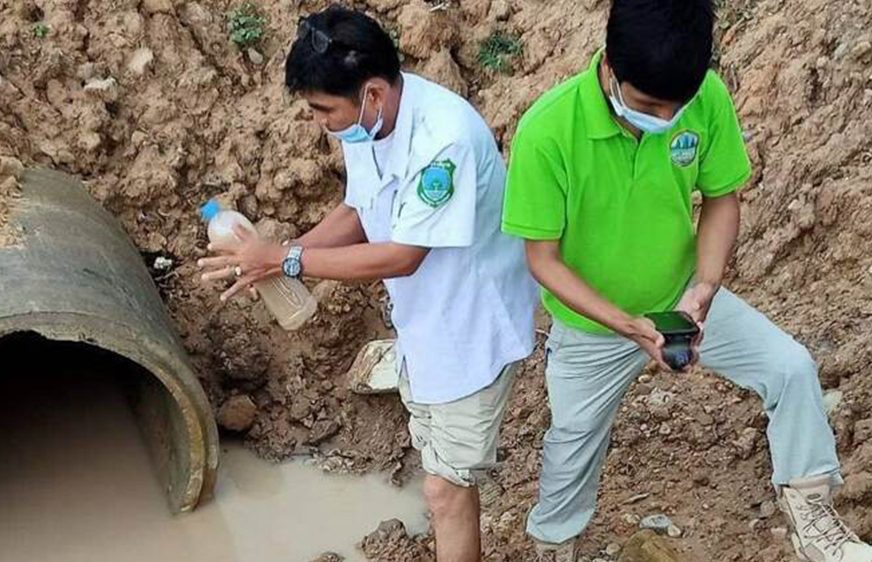 Environmental officials sample water from the Sangke river outside the Phoenix Industrial medical manufacturing plant in Battambang’s Treng commune, in a photo posted to the Information Ministry website on May 26, 2021.

Battambang provincial authorities have warned a medical factory over acidic wastewater discharge that has contaminated the Sangke river and which they say is impacting public health and the environment.

Bunrith said officials sampled the wastewater and found it was toxic due to high acidity. It had killed fish in the river, raising concerns for people using water from the Sangke, he said.

Authorities will take legal action against the company, Phoenix Industrial, if it did not take timely remedial action, he said.

“[We] will not allow this to happen on the territory of our province, especially related to the Sangke river. And the factory has to take responsibility for what it has caused through their negligence,” he said. “We regret what happened and we must be very careful and hold the company accountable.”

“Since the first day of the incident, we disseminated to all village chiefs and asked them to educate people not to use the water,” Sophal said.

Oeun Sovuthy, in Ratanak Mondol’s Andoeuk Heb commune, said the discharge had also contaminated the Pich Chenda river, but nearby residents had few other options.

“We are worried after having seen wastewater and chemicals, and we have no choice but to continue using that water,” Sovuthy said.

A company representative who declined to give her name said the factory was in the process of building a wastewater treatment basin that was currently about 85 percent complete. Wastewater would be treated and reused in the factory, he said.

Phoenix Industrial was incorporated in 2016 and up until last June was known as Er Kang Bio Starch Co. Ltd. Data from the supply chain database Panjiva show that Er Kang Bio Starch exports sodium citrate dihydrate to the U.S., last shipping 16,384 kg of the compound to California in August. Sodium citrate dihydrate is a sodium salt of citric acid used to prevent stored blood from coagulating, a treatment for kidney stones and as a food preservative.