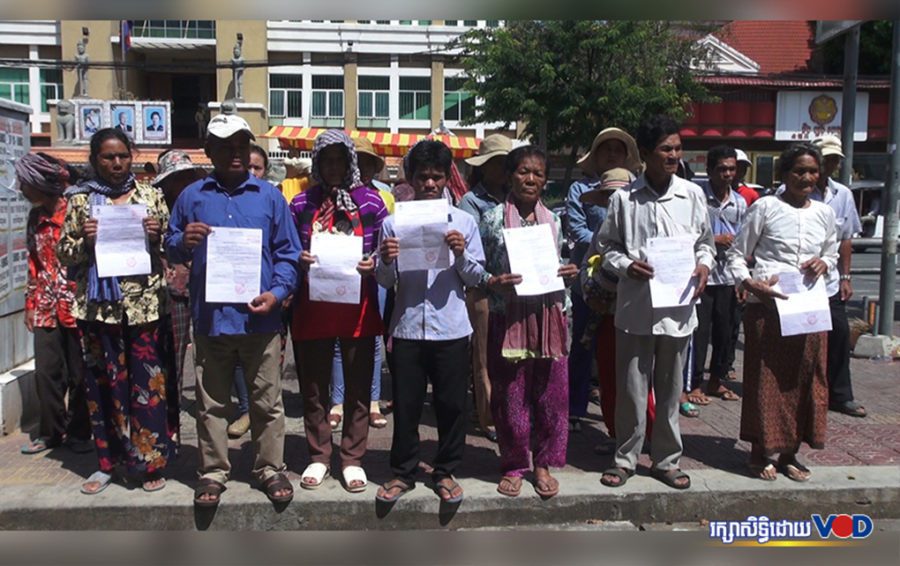 The families in Kompong Chhnang province’s Lor Peang community lost their homes and farms to a government minister’s wife more than a decade ago.

Since then, they have been beaten and jailed during armed clashes with corporate security and local police. Their plots of land have been fenced off to stop them from farming. They barely survive by catching crabs and frogs.

Last week, they continued their protest outside the Phnom Penh Municipal Court after they were told in March they would have to pay 400,000 riel (about $100) each just so their case for fair compensation for their land could be heard.

“The company took my land that I didn’t even sell to them,” said Hul Na, 36, a mother of four. “I try and dig and scrape to look for cassava to feed my children.”

“I weave palm leaves for money, and catch crabs and frogs to sell to support us. I almost can’t earn anything in a day,” she said.

The land dispute dates back to 2002, when KDC International, owned by Mines and Energy Minister Suy Sem’s wife Chea Kheng, bought just under 200 hectares of land in Kompong Chhnang province’s Kompong Tralach district. Four years later, police, military and construction workers descended on the land to remove families living on a further 600 hectares, according to media and NGO reports.

The families resisted what they characterized as a flagrant land grab and have made repeated journeys by foot to the capital to plead their case with authorities. But slowly their numbers have dwindled as hold-outs have caved to pressure.

“There used to be more than 100 families protesting but they have seen people arrested and sent to jail and they have withdrawn,” said one villager, Chhit Sokhorn, at the court last week. “There is only my group remaining,”

“Even though we have been beaten up and bled from our heads, we are still crawling to come here,” she added. “We had to walk through backroads till we reached Phnom Penh. We carried our children, rice pots, [and] carried water.”

About 40 families remain in the struggle, the villagers estimated, and are still seeking compensation for about 110 hectares of land they say was taken.

The decade-long dispute had changed many of their lives forever, Sokhorn said, explaining that her husband had been jailed for six years for leading a protest.

“You’re asking how hurt we felt?” she said. “When we still had farmland, we lived easily. Now, there’s nothing left. I’m old and I can’t do anything.”

Um Sophy, a community representative, said he hoped the remaining villagers might be vindicated in their commitment to their cause if Prime Minister Hun Sen intervened, or if the court system was to make an independent judgment.

She said had been fired from her former job as a teacher due to the protests.

“Even though we are poor and have dealt with this land dispute for many years, we will try to make money to pay the court to process our cases because this case is unjust,” Sophy said, referring to the $100 per-person court fees. “We are farmers. We need our land back for our children in the next generation.”

Licadho senior investigator Am Sam Ath said the only hope of the villagers was to stick together since, as poor families, they faced an uphill battle for justice.

“We have looked into their case, and it appears difficult to win the case against the company. But we have also seen that they haven’t abandoned hope that there will be justice for them, because what they lost is their land,” Sam Ath said.

Sam Ath appealed to the municipal court to waive the $100 court fees for the Lor Peang community to have their case for fair compensation heard.