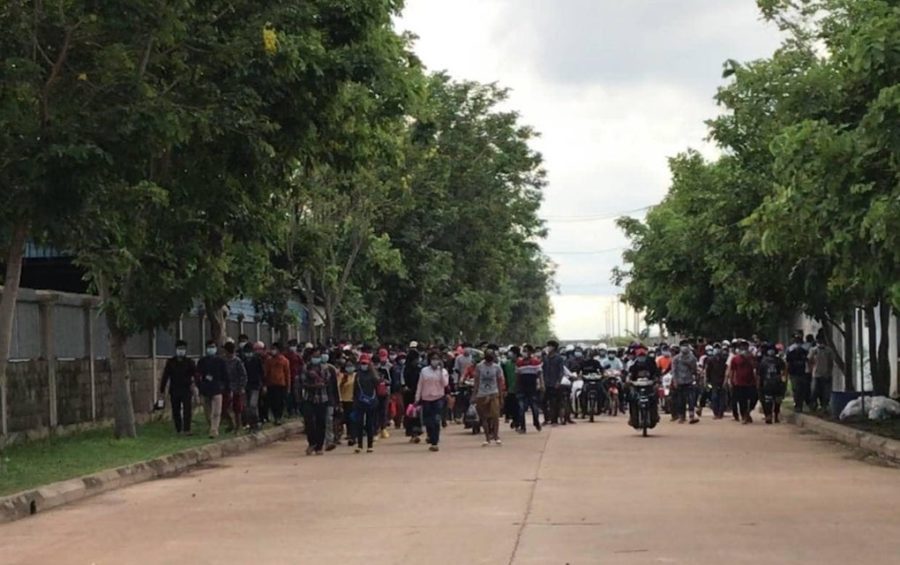 A crowd of workers after leaving a factory in Svay Rieng province’s Bavet city due to Covid-19 fears on May 26, 2021. (Svay Rieng Provincial Hall)

Afraid of getting locked down inside a bicycle factory, an estimated 2,000 workers fled out of rear entrances, overwhelmed a deputy governor asking them to stay, carried their motorbikes through a pond, and scattered.

Wednesday’s panic at Svay Rieng province’s A and J factory began with one positive test. A further nine Covid-19 tests were taken, and three workers tested positive. Then 145 more were tested, with 54 positive.

But when health officials tried to further expand the testing and quarantine the positive cases, workers ran from the premises, not wanting to be the one left behind.

By Thursday, other factories in Bavet city were seeing on-edge employees arrive to work only to panic and run away — even where there were no Covid-19 cases, some workers said.

And in the evening, hundreds of workers who had been placed under quarantine at a garment factory walked out en masse.

Several videos have emerged of the A and J mass escape. In one, motorbikes stream out of a side street as a guard exclaims to an unclear target: “Do not go. … How can [we] keep them in, since they all are running home now. [We] cannot stop [them] anymore since they riot to get out.”

In another, Svay Rieng deputy governor Touch Pouliva stands in the middle of a road, facing hundreds of workers on motorbikes, exhorting them to stay.

“Please go back. Feel sympathy for the people who stay at home. Aging parents. … Do you understand! Go back inside, and I will have rice for you,” Pouliva is seen saying.

The mass of workers begin to blare their horns.

Another official shouts: “Those with young babies — if you are infected you will die. … If you love your family, please go back.”

The workers press forward and ride past about half a dozen officials.

Chan Sony, an A and J employee, said on Thursday that trouble started at around 3 p.m. Health officials arrived and took about 30 workers who had tested positive in rapid tests from earlier that day, he said.

The rest of the factory floor saw what was happening and began to run out of the backdoor.

Factory security tried to block them, but there were too many leaving, he said. “How can we stay alone since all have left?” he asked.

So Phorn, another A and J worker, said the biggest fear was getting locked inside the factory for two weeks and relying on authorities for food. Workers had heard about conditions at other locked-down factories, he said.

“I ran away because I was afraid of being quarantined,” Phorn said. “There would be difficulties since it is not like staying at home, like taking showers and eating.”

Pouliva, the deputy governor, told VOD that authorities had tried to contain those who were infected.

“Brothers and sisters started to panic and get scared, and they left through the back,” he said.

“Some of them dragged their motorbike across the water,” Pouliva added. One video posted online shows workers carrying their motorbikes through a pond to circumvent authorities’ attempted roadblocks.

More than 2,000 workers had escaped, he said. He was concerned that they would spread Covid-19 across the community, to their families and relatives.

The Svay Rieng provincial administration said in a statement that authorities had been contact-tracing a suspected Covid-19 case at the bicycle factory. The suspected contact volunteered to be tested, and was found positive.

They followed up with nine more tests, three of which were positive, then 145 tests and 54 positive cases.

“Although the team tried to explain about taking samples and health care and the effects of the Covid-19 epidemic and quarantine, the brothers and sisters believed in incitement and provocations and left the factory,” the statement said.

By Thursday, workers across the city were on edge.

Kuch Chenda, at the Xueda garment factory, said about 600 workers turned up on Thursday morning nervous.

So were others around the Manhattan Special Economic Zone, she said.

“When we got to work, we saw that [workers at] the majority of factories were not going inside,” Chenda said. “I was also full of doubt myself, and when we got inside the factory everyone got in a panic, and they left without any reason.”

There was no Covid-19 at Xueda, as far as she knew. But when workers saw other factories leaving, they followed, she said.

At the You Li garment factory in the Shandong Special Economic Zone — a large factory with more than 5,000 workers — Sam Chenda said that over 700 workers had been quarantined inside the premises since May 22. Other employees, like him, were quarantining at home, he said.

The workers locked inside the factory had been unhappy for days, he said.

And on Thursday evening, amid the restlessness across the city, hundreds walked out, Chenda said. A video of the walkout, with a crowd of workers dragging luggage along a pathway alongside factory buildings, was circulated online.

Chenda, who is a union representative, said he was being told of hundreds of workers leaving, and only about 100 remaining inside.