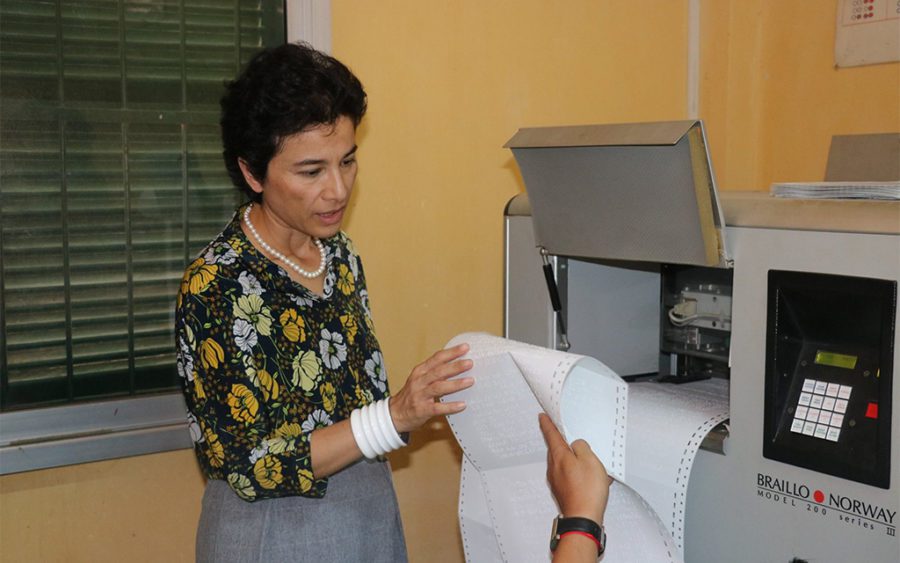 Former French Ambassador Eva Nguyen Binh examines pages printed from a Braille printer at the Institute for Special Education for Deaf and Blind Children in Phnom Penh, in a photo posted to NGO Krousar Thmey’s Facebook page on July 28, 2017.

On campus, Vin Vicheth could get his friends to read out printed materials for him. On Zoom, he has little chance of catching up to any slides presented on screen.

For Cambodia’s blind students, school closures and the pandemic have added new difficulties to their studies. Video chats have left them with only portions of lessons, Khmer-language screen reading technology has been lacking, and one of the country’s only braille publishing houses has been temporarily shut due to Covid-19.

Vicheth, a third-year philosophy major at the Royal University of Phnom Penh, says he can’t use a computer for classes, because only his smartphone can read out Khmer.

“I cannot see anything when the teachers share [slides]. I only listen,” he says. “I don’t have anyone to read for me as they are busy with their own stuff, though sometimes my friend reads it and sends a voice message.”

He used to try to get printed materials early from his lecturers so he could have them reprinted in braille, a process that takes at least one to two months. He would often end up behind in classes, but he tried to make it work.

However, the printing house, at the National Institute for Special Education, has been closed due to Covid-19.

“I haven’t read any book for almost a year already,” he says.

“I feel isolated from society. I haven’t seen any people care for us in this difficult time. I only try to help myself,” Vicheth adds. “I don’t believe in myself that I’m good at studying. I feel I am just studying now to get through university.”

Cambodian classrooms have been repeatedly closed since the start of the pandemic, and has now been closed for around six months since the emergence of the “February 20” outbreak. Students have spoken of difficulties with internet access as well as maintaining interest in online teaching.

At Krousar Thmey, a social work NGO that supports education for blind and deaf students, communications officer Charlotte St Mart says that students in general are having a hard time with online classes, but accessing online education is especially challenging for students with disabilities.

“[T]he teaching methods of the online national education program were not adapted to the specific needs of visually or hearing impaired students,” St Mart says.

Ly Khemara, manager for printing at the National Institute for Special Education, says he usually prints around 2,000 braille books a year for blind students, but currently staff are working from home and nothing is getting published.

“We’re temporarily closed,” he says. Most books are for primary and secondary schools, but a small number go to university students, he adds.

Mei Ponleu, 24, a first-year international relations student at the University of Cambodia, says he is having a better time than some other students with visual impairments because his classes are in English, which allows him to more easily use a screen reader.

But classes are still a challenge — even when campus is open, schools have been reluctant to give him electronic copies of books. “They’re afraid we’ll make [copies] for sale,” he says. He doesn’t understand online classes as well, and hopes he can return to the classroom soon.

“Every time I’ve taken an exam I’ve almost failed,” Yangly says. “Online, I type on my phone and answer the questions to the teacher. It’s hard to access in some programs.”