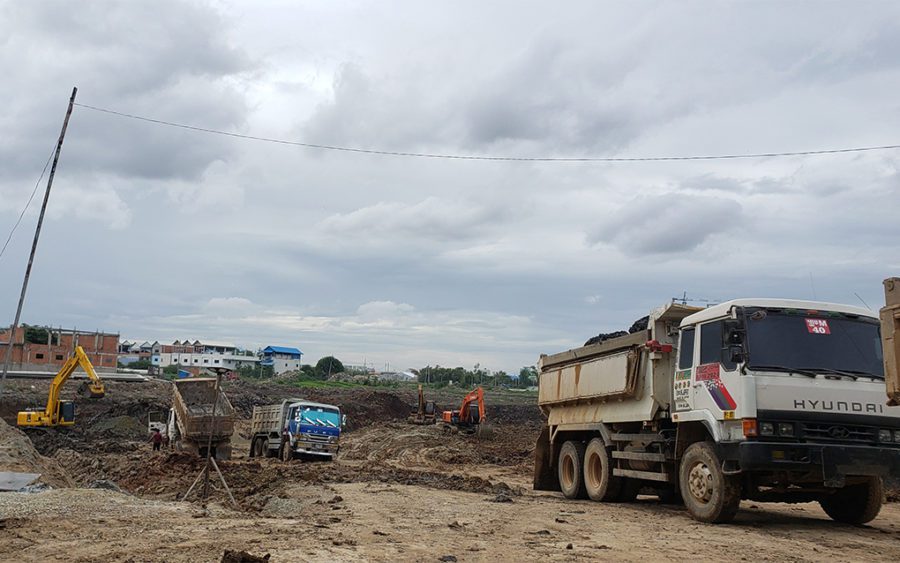 Three dump trucks and three excavators dig out the future reservoir in Boeng Tompun I commune on July 21, 2021. (Danielle Keeton-Olsen/VOD)

District authorities deleted photos on reporters’ cameras and made them leave a public area as authorities demolished residents’ homes, allegedly without compensation, near the Boeng Tompun lake development.

Meanchey district authorities were in the process of tearing down houses — about 10 families’ homes are slated for demolition — in Boeng Tompun I commune on Friday, saying residents were living illegally on state land.

Residents said they had received a letter on August 6, a week before the incident, ordering them to remove their houses to make way for a reservoir.

So Saray, one of the residents, said the demolition began on Wednesday, and about 100 officials came down to the site on Friday as the 10 families protested.

Saray said people had been living on the land for about 20 years.

“I think it is not right at all, because people belong to the state [but] the state did not think about its own people, instead evicting them from homes. It amounts to theft. [They] evicted us and did not give compensation,” he said. “If it was 1979, we would get it. But we have land titles. The village and commune have recognized it. … Now, the authorities turn around to not recognize it, so what can we rely on?”

Another resident, Sary Yuthipol, a soldier, said people were not against the government’s development plans, but there should be proper compensation so people can find houses in other locations. People were already facing hardships amid Covid-19 without the forcible eviction, he added.

“I’ve always raised my hands to beg for all development, [but] if there is impact, please give compensation,” Yuthipol said. “We are not illegally encroaching the land. We have been living here since 1991 and authorities have recognized it.”

Lors Liblib, 29, a trainee for Voice of America, went down to cover the story on the day. He said on Monday that he had taken some photos around 9 a.m. as heavy machinery tore down a house.

He was taking photos while standing next to a neighboring house, and district officials saw him and he was stopped soon after, Liblib said.

District officials asked who he was and took two of his phones to delete all photos. He said he was ordered away from the scene.

Liblib said he tried to explain to officials that he was a reporter and he had not done anything that would affect the authorities’ work. “They told us that if we keep going on, they will take the ‘next step.’”

As a trainee, it was the first time he had faced such a situation, and he felt nervous. He tried to follow the authorities’ orders, he said.

“I think it is a kind of serious violation of the rights of reporters in fulfilling their duties as journalists,” he said.

He said it made authorities look like they were trying to hide something behind their actions, and don’t want the public and other people to know about it.

“I think I have done nothing wrong, and as a citizen, I can use my rights as a citizen to participate in knowing about — and also have rights as a journalist who can go down and cover — an event of social injustice,” the trainee said. “I think I will still conduct activities that can serve the common good of the people.”

Meanwhile, An Vicheth, a freelance reporter for the Cambodian Journalists Alliance, said he had scarcely taken a preparatory shot around 9:10 a.m. when he was rounded up by four or five officials.

They ordered him to delete his photo and confiscated his press card, he said.

“I think it is a serious violation against press freedoms. We are reporters and we have faced such [challenges], so what about ordinary people? How much do they endure?”

Meanchey district governor Pich Keo Mony said on Friday that authorities had not compensated the 10 families because they were living on state land illegally.

The reservoir construction was necessary as the area flooded when it rained, he said.

However, regarding the obstruction of journalists, Keo Mony said on Monday that he had not received a report about the incident yet, and referred questions to his deputy, Long Nget.

Nget said he did not know about the matter and hung up as a reporter tried to raise another question.

Three journalists have previously been detained for covering a dispute in Boeng Tompun, and a reservoir project in the area involves Choeung Thean Seng, the son of Pheapimex tycoon Choeung Sopheap. A VOD reporter was told by a guard to delete her photos while visiting the reservoir project in July, but her phone was not confiscated.

Correction: An earlier version of this article, and previous media reporting, said Choeung Theang Seng was Choeung Sopheap’s brother. However, according to NGO Global Witness, Theang Seng is Sopheap’s son.