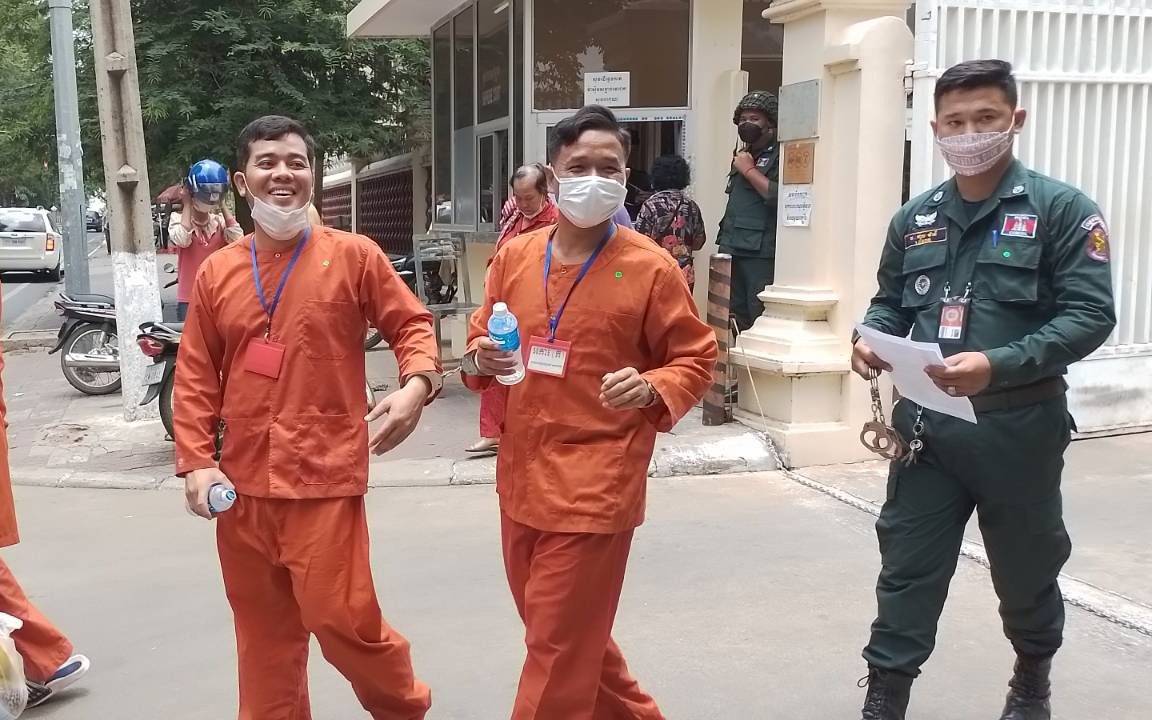 Chan Sarath (left) and U Roem exit the Supreme Court after their hearing on April 20, 2022. (Supplied)

A group of convicted plotters appealed their sentences on Wednesday, arguing that an electronic device portrayed during their trial as a bomb detonator was insufficient evidence that they had violent plans.

Six people were convicted of plotting on December 6, 2020, said to be part of the “Khmer Liberate Khmer Movement” led by Sok Phearum, 65, who lives in the U.S. and was sentenced in absentia to eight years in prison.

Three others were sentenced to seven years, though one of them, Kheng Rann, 48, died during his imprisonment in April last year. Kong Thann, 75, was sentenced to five years, but did not go to prison due to age and health issues, while Phearum’s granddaughter Ek Amry, 26, was sentenced to six years.

At the Supreme Court on Wednesday, defense lawyer Lor Chunthy said there had not been enough evidence to convict them of supposedly building up an army to topple the government between 2017 and 2019.

“There is no movement and nothing actually happened,” Chunthy said.

He argued that the key evidence had been an electronic device portrayed as a bomb detonator, but it was standard machinery that could be bought online used for automatic doors.

“There is no evidence to show how the chip could have detonated a bomb. There is none,” he said.

The defendants had contacted Phearum on social media with the aim of creating a political party, he said. “Sentencing my clients up to seven and eight years in prison is too serious.”

Three defendants appeared in court on Wednesday. Construction worker Chan Sarath, one of the three sentenced to seven years, said he could not accept the conviction. “I just wanted to have a political party,” Sarath said.

Lawyer Chunthy said after the hearing that Thann, the 75-year-old, had received the electronic device from the U.S. but did not know what it was, and had asked people in his village to study it to see if it had any use.

The defendants in Cambodia were from across the country, including Kampot, Phnom Penh and Battambang.

Prosecutor Chhuon Chantha said he considered the previous Appeal Court decision to uphold the convictions to be proper. He asked the judges to make their decision based on the law.

The Supreme Court is scheduled to announce the verdict on May 4.