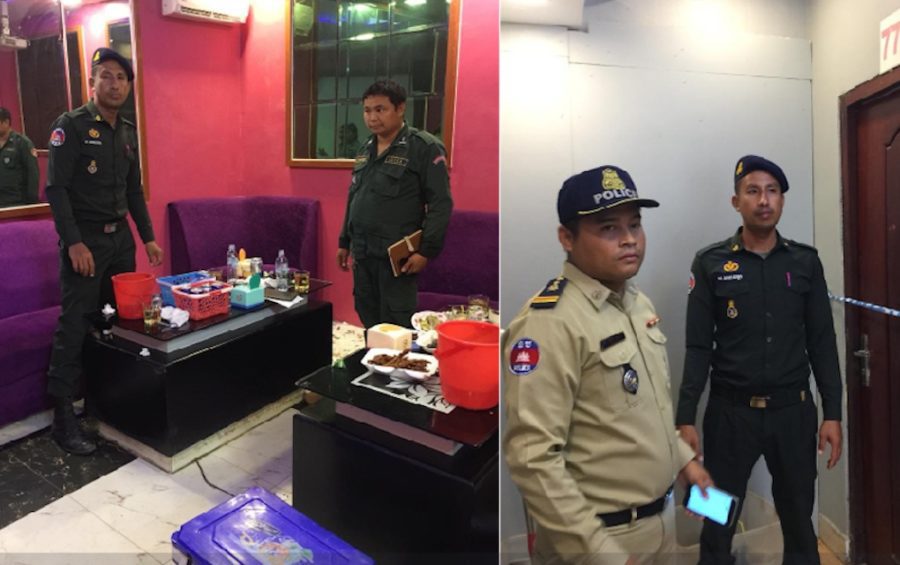 Police investigate a room at the “Mey Mey” KTV parlor in Kandal province from where four hostesses were rushed to hospital on June 17. (National Police)

Four men, including three police officers, have been arrested in Kandal province and another is on the run after a woman entertaining them at a “KTV” karaoke parlor died after taking ecstasy, local police said.

Loeuk Dek district police chief Aim Thou said on Tuesday the men had been partying late into Sunday night at Ka’am Samnor commune’s “Mey Mey KTV” when the owner heard arguing in their room and called police.

Four of the hostesses in the room were rushed to a hospital near the Vietnamese border, Thou said. One of the women died on Monday, while the other three remained in hospital as of Tuesday.

The four men were arrested on the spot while the other ran away, he added. Three of those arrested were police officers employed at the nearby Ka’am Samnor International Border Checkpoint.

“We have received positive tests for substances the suspects left at the karaoke parlor,” Thou said. “They were drugs. That drug is called ecstasy.”

The arrested suspects remained in police custody for questioning on Tuesday but would soon be sent to the provincial court, he said.

Gender and Development for Cambodia director Ros Sopheap urged for the perpetrators to be handed substantial sentences given their jobs.

“If we don’t do anything, other officers will do the same thing. It will not set a good example,” Sopheap said. “Otherwise, [they] won’t learn their lesson.”