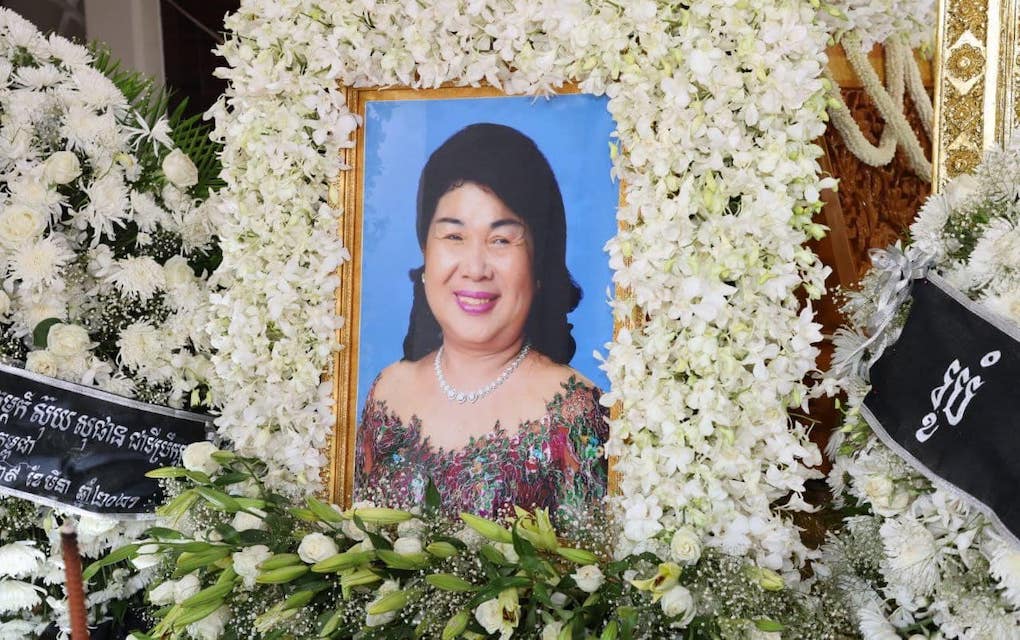 A portrait of Suy Sophan at her funeral, in a photo posted to the Facebook page of Bun Rany, Prime Minister Hun Sen’s wife.

Phanimex director Suy Sophan, known for her close links to some of the country’s most powerful women and for controversies surrounding violent evictions at her company’s inner-city Borei Keila development, died aged 62 on Monday morning, the Cambodian Red Cross said.

Sophan was a “beloved wife, mother and grandmother,” the letter said, as well as “an active philanthropist who always donated money to support the activities of the Cambodian Red Cross.”

Hun Sinath, one of Hun Sen’s sisters, expressed her condolences to Sophan’s family in a Facebook post on Monday morning. According to Sinath, Sophan had battled liver cancer over several months.

Sophan’s death sparked mixed reactions, including on Sinath’s Facebook post and from some who were victims of forced evictions at Sophan’s Borei Keila development in Phnom Penh.

Khieu Lai, a member of the evicted Borei Keila community, who now lives in Kandal province, said she could not forget the pain caused by Phanimex, which used heavy machinery to bulldoze people’s homes on January 3, 2012.

Phork Lina, another former Borei Keila resident, said it was hard for him and the people of the Borei Keila community to forgive.

On January 3, 2012, Sophan’s Phanimex and Phnom Penh municipal authorities used bulldozers to raze the homes of hundreds of families in Borei Keila. Police used tear gas and live ammunition, resulting in injuries to at least 12 people, according to a statement from civil society groups at the time. Phanimex had promised to build 10 apartment buildings on the site for existing residents, but built only eight, leaving about 300 families in the lurch, the report says.