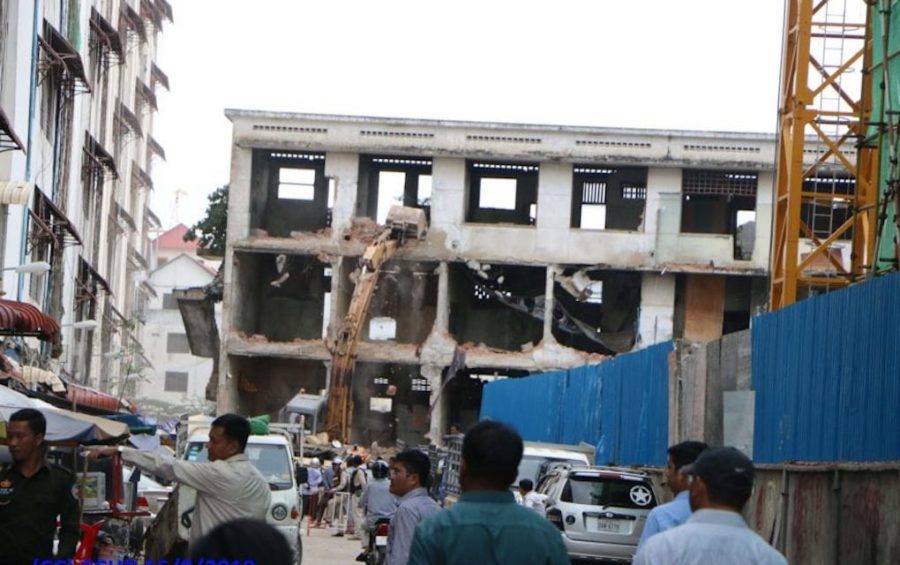 A building in the Borei Keila neighborhood, in Phnom Penh’s Prampi Makara district, is demolished on September 16, 2019. (Cambodian Center for Human Rights)

Six residents of the eviction-hit Borei Keila community, including a child, were taken into detention at the notorious Phnom Penh Social Affairs Center, better known as Prey Speu, on Monday, another resident told VOD.

Local authorities could not be reached to confirm the detention.

Demolition of a dilapidated building in Prampi Makara district’s Borei Keila neighborhood began on Monday, with a photo of a digger pulling down its walls shared by the Cambodian Center for Human Rights. Journalists were barred from entering the area.

Following violent evictions at the hands of developer Phan Imex seven years ago, a group of holdouts had moved into the building and resisted further expulsion.

The area’s evictees had been promised new housing in the development, but some buildings were never constructed, leaving hundreds of families without housing.

Sar Sorn, one of the final residents, said local authorities had begun moving people out of the building on Sunday.

When a group attempted to re-enter on Sunday evening, they were arrested and shipped off to Prey Speu, Sorn said.

“They were arrested and I am not sure whether they were accused of being vagrants or what,” she said on Monday.

The U.N.’s human rights envoy to Cambodia, Rhona Smith, has repeatedly criticized the center’s conditions, and this month said in a report that there had been an uninvestigated suspicious death at the center, and called for an inquiry into “whether the centre should continue to exist at all.”

Sorn, the Borei Keila resident, said there had been 12 other people refusing to leave the premises as demolition was poised to start on Monday morning. They were taken to the district hall, she said.

Nhem Sreynich, another Borei Keila resident, spoke to VOD by telephone on Monday from the district hall, where she said she was being detained.

“We aren’t allowed to even go out to buy some water. I don’t understand the reason. They are afraid we will go and cause trouble at their work site,” Sreynich said.

The demolition had begun even though many of the residents were yet to be compensated, she said.

Sreynich could not be reached again on Tuesday.

Vann Sophat, land program coordinator at Cambodian Center for Human Rights, said the government had failed to find an acceptable solution for the remaining families.

They should provide adequate compensation rather than detain residents, he said.

“The arrests are a serious threat because it is a way to discourage and prevent them from standing up and protesting again,” Sophat said.

Tycoon Suy Sophan’s Phan Imex received a license to develop the area in 2003, promising to construct 10 buildings, including space for existing residents to move into. It halted development after just eight buildings went up, claiming bankruptcy, which left about 300 families without housing. Some were relocated to the city’s outskirts, while others moved into shells of buildings remaining on the site.