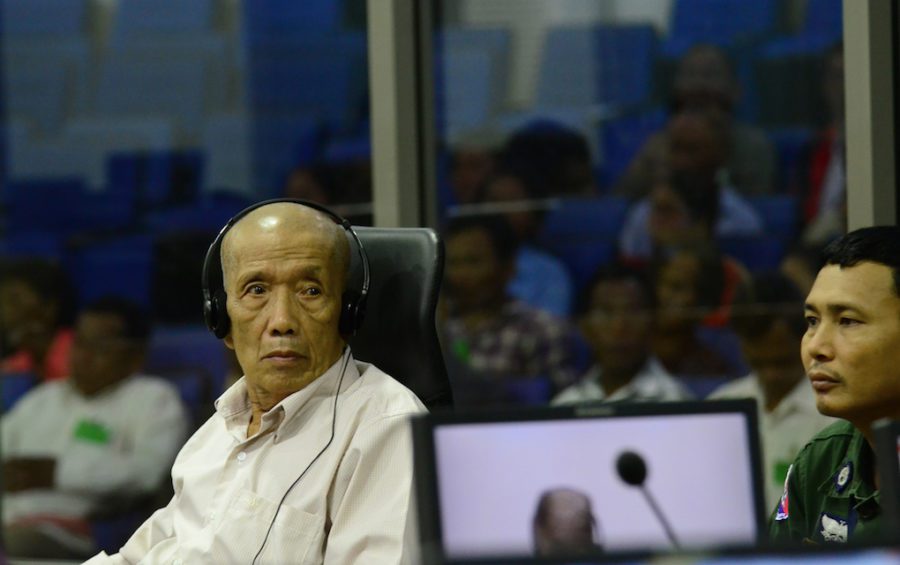 UPDATED 1:47 p.m. — The former head of Khmer Rouge detention center S-21, Kaing Guek Eav, known by his alias “Duch,” died late Tuesday night in a Phnom Penh hospital, the spokesperson of the tribunal that convicted Duch of crimes against humanity and other crimes said on Wednesday.

In a statement, the Kandal Provincial Court said Duch had died of bronchitis after being transferred to the Khmer-Soviet Friendship Hospital from prison.

He was 77 years old, according to the Extraordinary Chambers in the Courts of Cambodia (ECCC).

The hybrid Cambodian and international court’s Trial Chamber convicted Duch in 2010 of crimes against humanity and grave breaches of the Geneva Conventions. He was sentenced to life imprisonment in 2012.

He was also convicted of willful killing; torture; causing great suffering or serious bodily injury; depriving a prisoner of war or civilian of the rights to a fair trial; and unlawful confinement of a civilian in violation of the 1949 Geneva Conventions.

During the Khmer Rouge’s less than four years in power, Duch was deputy and then chairman of Phnom Penh’s S-21 detention center, where more than 10,000 people were believed to be sent to their deaths, with many jailed and tortured before being killed. The site, a former school, is now the Tuol Sleng Genocide Museum.

More than 36,000 people attended Duch’s trial and appeal hearings in Case 001, the court’s first case, over 80 days of hearings, the ECCC said. Including Duch, the tribunal has in total convicted three leaders of the Khmer Rouge, under which some 1.7 million people died from starvation, torture, execution and forced labor from 1975 to 1979.

During tribunal testimony in 2009, Duch acknowledged responsibility for regime killings — though he initially downplayed the number who were killed at other detention camps, the Cambodia Daily reported at the time.

“Even though the decision was made at the upper echelons, at my level, I was responsible,” Duch was reported as saying. “I would like to apologize to the souls of those who died. I still cannot forget their names.”

He added in 2016 that as chief of S-21 he “knew everything” about the “smashings” that were ordered at the prison, according to the Daily.

In 2012, he began serving his prison sentence in the ECCC detention center, and was transferred to the Kandal Provincial Prison the following year to serve the remainder of his term.

According to his biography on the tribunal’s website, Duch was born in Kampong Thom province in 1942. He became a mathematics teacher in 1965, and “was allegedly drawn toward communism.”

In 1968, he was arrested by Norodom Sihanouk’s police and released when Sihanouk was overthrown two years later. Duch was allegedly the chairman of Office 13 or M13, another communist party security office in the north of the capital from 1971 to 1975, according to the tribunal.

After the Khmer Rouge regime was removed from power in January 1979, Duch remained with the ousted ultra-Marxist cadres until the early 1990s when he returned to teaching. He was found living in the Samlot district in Battambang province by a journalist in 1999, and later arrested by military authorities.