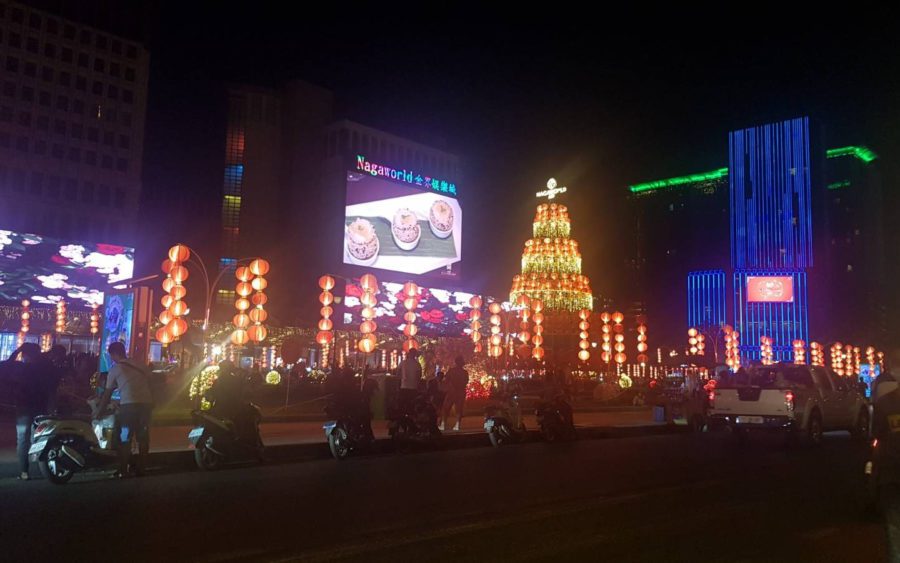 NagaWorld on the evening of February 5, 2022. (Tran Techseng/VOD)

UPDATED 9:52 p.m. — At least two NagaWorld union members have been arrested Saturday evening, according to police, following Covid-19 testing of more than 200 protesters.

Phnom Penh Municipal Police spokesperson San Sokseyha said in a message that officers had arrested two strikers around 7:30 p.m. for the crime of obstructing authorities. They were being sent for questioning at the municipal police department, Sokseyha said.

Municipal police also posted about the arrests of two strikers and attached Article 11 of the Covid-19 Law, or obstruction of enforcement measures, punishable by six months to three years in jail. It is punishable by two to five years in jail if the obstruction leads to infections or serious public health impacts. Police also attached a document from municipal court prosecutor Seng Heang saying that arrests warrants were issued based on an anti-terrorism report by police.

Local rights group Licadho earlier said that NagaWorld union LRSU had informed them of six union members’ arrests on their way home from the testing, two of whom were pregnant women. Licadho said it was still working to locate the workers. The union later posted names and photos for the six workers online, saying they were all arrested leaving the testing site.

Labor rights NGO Central said it was told by NagaWorld union LRSU around 9 p.m. that three of the six arrested workers had been released. Three arrested women were released and three men remain detained, it said.

Licadho added that it had two court summonses for strikers Choup Channat and Seng Vannarith, for obstructing official measures.

The summonses point to a Criminal Procedure Code article for “flagrant,” or red-handed, crimes.

Sokseyha, the police spokesperson, also confirmed the names of Channat and Vannarith.

Channat and Vannarith were present at the testing of more than 200 workers for Covid-19 earlier Saturday evening.