Updated: Detained NagaWorld Strikers Say All but Two Test Negative, Uncertain if They Can Leave 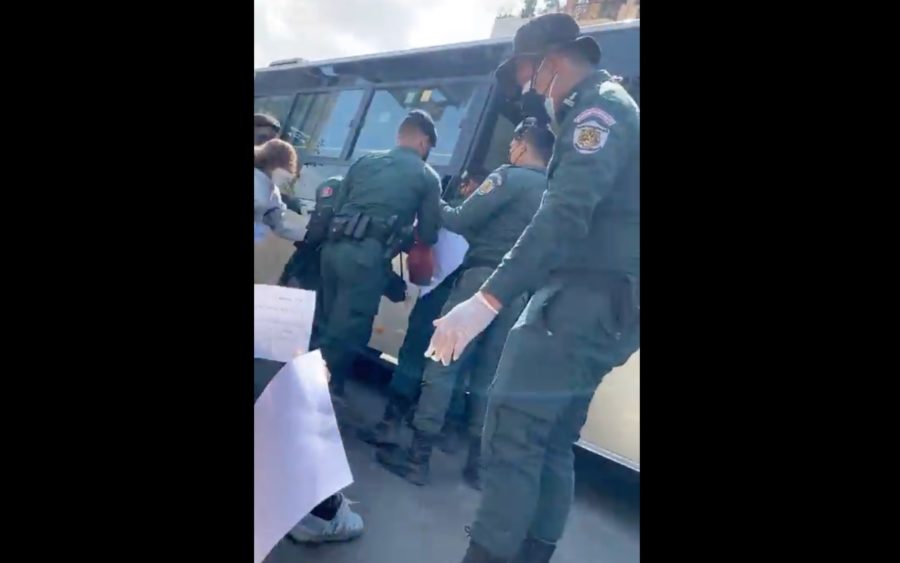 Around 60 NagaWorld workers were shoved into city buses and taken to a quarantine center, as seen in a live video on Facebook Monday afternoon.

A group of about 60 NagaWorld workers detained for Covid-19 measures while attempting to resume their strike said two people had tested positive for the virus Monday night but only after being tested a second time — initially all workers had tested negative, the workers said.

Livestreams from the workers’ first day back on strike posted at about 2:45 p.m. on Facebook show police officers pushing and shoving workers into city buses outside the Phnom Penh Center in Tonle Bassac commune, not far from NagaWorld. Police and other officials, some in personal protective equipment, surrounded the workers at the corner of Sothearos and Sihanouk boulevards.

A bus driver said that two buses were used to bring 59 workers to the Prek Pnov center. There were four or five other buses waiting outside Phnom Penh Center and around five flat-bed trucks with military police officials.

Chea Sokhom and Mam Sothavin, both workers who were detained, said around 8 p.m. the entire group had tested negative and were waiting to leave the Prek Pnov facility.

But around 8:30 p.m, Sovathin said two workers were tested again, with both results coming back positive. Workers were also being asked to sign a contract to refrain from gatherings, and were unsure if they could leave the facility if they didn’t sign the agreements.

“Now, they are not allowing us to go home, so it is very difficult to stay here. We don’t have place to stay here like mattress or bed,” Sovathin said.

Earlier in the day, Sokhom said workers were returning to NagaWorld to resume their strike Monday afternoon but had been detained and brought to the Cambodian Women for Peace and Development facility in Prek Pnov, sending a photo of the signage at the building. Sothavin refuted police allegations that the workers had not tested again after finishing their seven-day isolation period last week.

“They did not say whether we are positive for Covid-19 or not. They said that 300 workers had not been tested last week,” Sovathin said.

Workers continued their protest at the quarantine facility, held their banners and questioned health officials about their detention. One health official said workers must get tested or else they could be fined or convicted for violating the law.

According to its website, the Cambodian Women for Peace and Development is a local non-governmental organization that works on poverty alleviation and improving the lives of women and their families. Reporters could not reach the organization for comment on Monday.

Phnom Penh governor Khuong Sreng and deputy governors. Keut Chhe and Met Measpheakdey, did not respond to requests for comment on Monday.

On the ride to the quarantine center, workers could be heard shouting and banging on the bus window: “Injustice! Brothers and sisters help us.” The bus was given a police escort.

The workers’ strike had come to an effective stop after health and local officials demanded they get tested for Covid-19. A worker who had not been to the strike for three weeks had tested positive, prompting officials to demand the entire cohort of workers be tested.

Workers who tested positive for the virus were sent to seven days of isolation and tested again last week. Some reported they had received conflicting instructions if they could leave isolation and resume the strike.

U.N. representatives, including its envoy to Cambodia, Vitit Muntarbhorn, last week criticized the quarantine of NagaWorld strikers, saying authorities must not disguise a crackdown on peaceful and lawful labor action as a public health response.

The story was updated at 9:06 pm on Monday with additional information