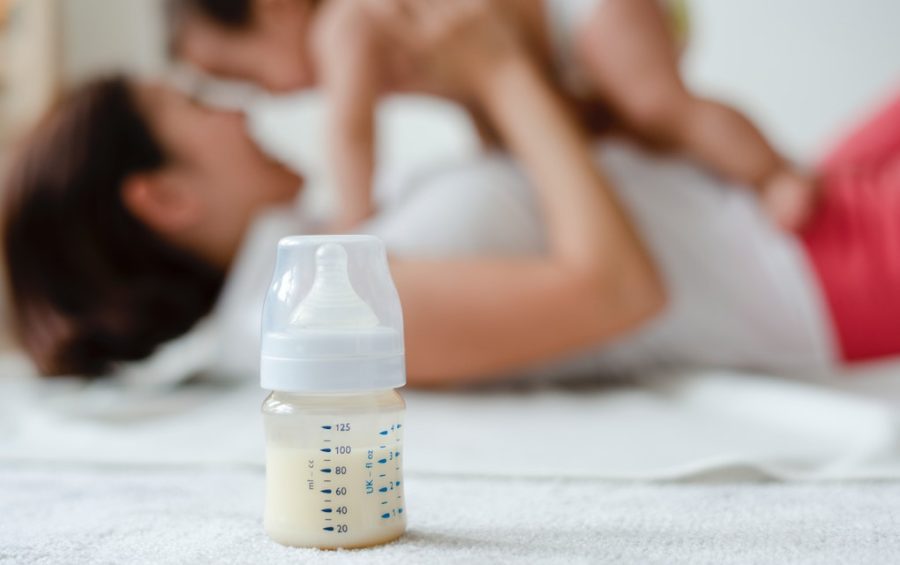 Representatives of World Vision and Helen Keller International, which both aim to improve child nutrition, including by promoting breast-feeding, said the practice had declined in recent years.

“Because this promotion is very exaggerated and the public and mothers think that the milk [formula] is of better quality and more nutritious than mother’s breast milk,” Kroeun said.

Breast-feeding is nearly universal in Cambodia, with 96 percent of children born in the two years prior to the release of the 2014 Cambodia Demographic and Health Survey, the most recent available, having been breast-fed at some point.

However, the percentage of infants under 6 months old who are exclusively breast-fed, as recommended by the World Health Organization (WHO), fell from 74 percent in 2010 to 65 percent in 2014, according to government figures.

“In Cambodia the bottle is used for feeding breast milk substitutes (which are most often formula or sweetened condensed milk or other canned milk usually thinned out with water) or very watery rice porridge (borbor),” both of which are not recommended, the 2014 survey said.

According to Kroeun, Cambodian families spend more than $100 million annually on powdered milk and baby formula.

Children who were not adequately breast-fed could face intellectual and physical growth issues and were more likely to face health problems in the future, Kroeun said.

A 2005 sub-decree on the marketing of products for infant and young child feeding requires labeling on powdered milk or baby formula products to state the “[b]enefits and superiority of breast-feeding,” especially the advantages of exclusive breast-feeding for the first six months of the baby’s life and sustained breast-feeding until the age of 2 or older.

Materials about infant feeding with breast-milk substitutes using a bottle must also include information about the estimated cost of the products for feeding an infant for six months, and health risks of bottle-feeding and inappropriate preparation of the formula products.

Saing Rany, a senior world policy officer at World Vision, said her organization had found that a variety of formula products sold in Cambodia were not following the labeling regulations.

The government should name and shame the offending companies and increase the amount of fines — currently only 2 million riel, or about $500 — imposed on rules violators to ensure compliance, Rany said.

“We want the ministry to release the names to show that these companies really acted wrongly and it may affect their reputations. For them, reputation is more important than that amount of money,” she said.

Health Ministry spokesman Ly Sovann said the government would take steps against formula importers and distributors that continued to violate the marketing rules, including fines and the release of companies’ names.