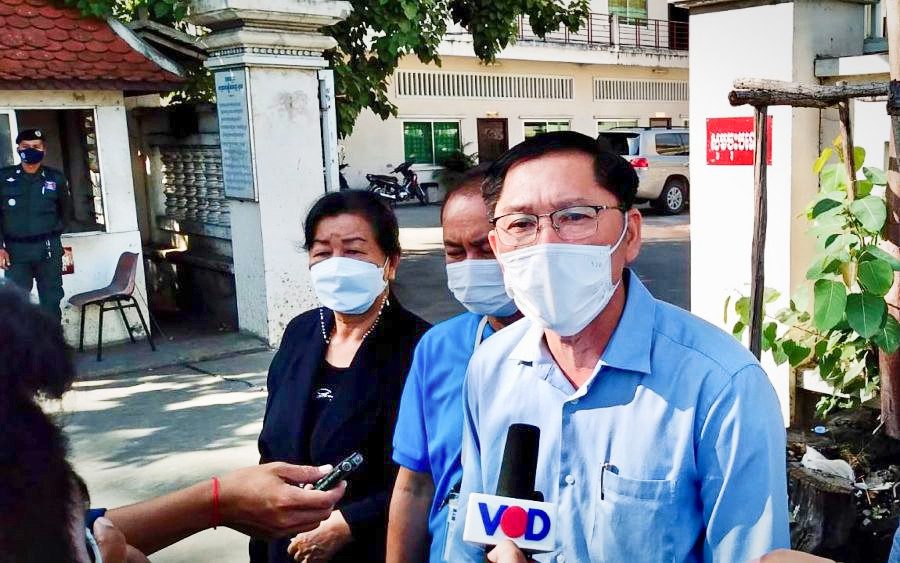 Adhoc staffer Ny Sokha speaks to the media outside the Appeal Court in Phnom Penh on March 25, 2022. (Ouch Sony/VOD)

A police officer who allegedly bit and caused injury to his girlfriend’s baby has been arrested and charged with violence.

Sath Thyda, spokesperson for the Siem Reap prosecution, said the charge was violence with aggravating circumstances. Under the Criminal Code, intentional acts of violence against a person particularly vulnerable due to their age are punishable by two to five years in jail and fines up to $2,500.

The biting incident happened in Preah Sihanouk last weekend, causing teeth marks and bruises on the 13-month-old girl. The girl’s mother said Virak had abused her child, and that she should not have trusted him.

The Appeal Court in Phnom Penh delayed a hearing into the controversial “Adhoc 5” case due to a defense lawyer’s contact with Covid-19.

The court was on Friday morning scheduled to hear an appeal into the years-old case, in which rights group Adhoc officials were convicted of bribing a witness. The case, from 2016, is related to the prosecution of then-CNRP vice president Kem Sokha over an alleged lover, and was criticized as political.

However, Sam Sokong, lawyer of Adhoc officer Ny Chakriya, requested a delay due to close contact with a Covid-19 case. Presiding judge Sin Visal granted the request, saying the criminal appeal could not be heard without a lawyer.

In September 2018, the Phnom Penh Municipal Court found Ny Sokha, Nay Vanda, Lim Mony, Yi Soksan, all members of Adhoc, and Ny Chakriya, a former Adhoc staffer and NEC employee, guilty. They had already served 14 months in jail at the time of the convictions, and the rest of their five-year prison sentences were suspended.

Some observers saw the case as politically motivated as it related to Adhoc providing legal and other assistance to salon worker Khom Chandaraty, Kem Sokha’s alleged lover who was also known as Srey Mom.

Speaking to reporters outside the Appeal Court, Ny Sokha said it has been almost five years since he and others had appealed the lower court decision.

“It is too long already for us to wait for justice. We really want to participate in these proceedings to know how much justice we will gain from the court.”

The lower court had failed to summon two of their witnesses, he added.

Defense lawyer Sam Tith Seyha said the Adhoc officers had only acted as legal consultants and their convictions for bribery were unjust.