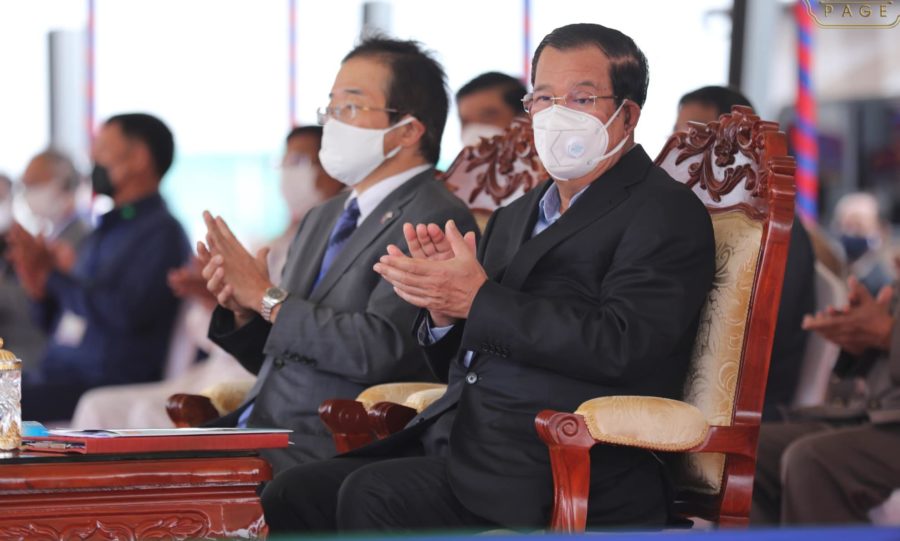 Prime Minister Hun Sen at a Tuesday event commemorating a new wastewater treatment station, as shown in a picture posted to his official Facebook account, February 2, 2022.

Mondulkiri indigenous Bunong residents have filed a complaint against a local commune chief and village chief for allegedly allowing other people to fence off their ancestral burial grounds in Sen Monorom district.

In a court complaint received on Monday by the Mondulkiri Provincial Court, the Bunong residents allege that about 11 hectares of the ancestral lands they use as burial grounds had been fenced in by unknown people. The complaint was filed by six representatives who said they speak for 72 families.

The document also includes a complaint to the Sen Monorom district governor on December 17, which included a map and pictures of the disputed land. Spean Meanchey commune chief Kuch Mengthou and Ou Spean village chief Chin Syleap are named in the complaint.

“Please, his excellency prosecutor open an investigation and punish the people who committed this and did not comply with the law, to take back the graveyard for the people to use,” the complaint reads. The residents also want to conduct a ceremony at the land and expect $100,000 in compensation.

Mengthou, the commune chief, denied any involvement in the dispute, claiming that residents never reported that the land was fenced off by others.

“I did not do anything to impact them and what their belongings are still belongs to them and I do not have time to solve for them,” he said. “According to them, they claim it is their ancestors’ graves and we do not deny it.”

Ngom Krais, a 72-year-old resident, said the Bunong residents had tried to build a fence around the burial grounds but were prevented by the unknown people, who instead built their own boundary wall.

“We have told the commune chief many times but he did not find a solution for us — we asked them but they did not tell who is on the land.”

Prime Minister Hun Sen said there will be no lockdowns in the country even as new infections spread at a brisk pace.

The prime minister was speaking at a Tuesday event in Phnom Penh. Hun Sen said he had heard rumors there could be a lockdown and wanted to deny the country would have harsh restrictions.

“As prime minister with full authorization to order for the lockdown or opening, I do not implement any lockdown measures,” he said.

The government imposed harsh lockdowns — called red zones — and imposed travel bans last year to stem the spread of the community transmissions. Though such measures have long been lifted, the spread of the Omicron infections has led to a sharp increase from 66 cases on February 4 to 736 cases last Sunday. The country reported 598 new cases on Tuesday and seven deaths in the past three days.

The recent surge has seen a run on pharmacies in the capital, which marked an increase in sales – as well as long lines at the Telecom Ministry where employees are selling the Covid-19 therapeutic Molnupiravir.

Hun Sen asked pharmacies to not charge exorbitant rates for medications, and directed the Health Ministry to ensure no counterfeit medicines were being sold in the market.