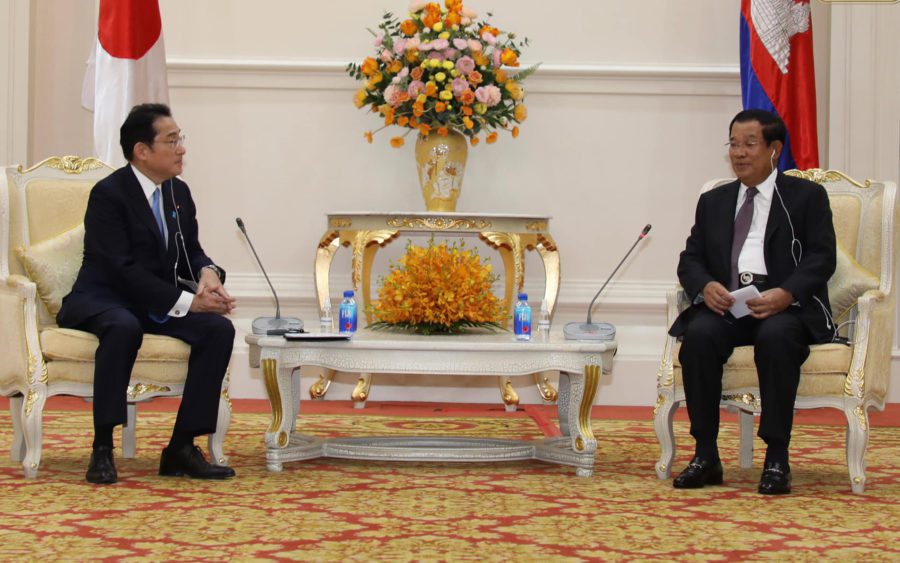 Asked about U.S. allegations that Preah Sihanouk’s Ream naval base was slated to be used by the Chinese military, Ono said Japan was aware of “press reports and other information” about the base.

She said Japan sought continued visits of its maritime self-defense force to Ream in order “to enhance transparency” at the base. This would happen in the context of “friendly” visits, Ono added.

An official joint statement between the two premiers also touched on Prime Minister Kishida’s expressed support for “the promotion of democracy and the rule of law such as holding elections in a way that reflects diverse voices from Cambodian people.”

Democracy would be supported by promoting dialogue between the Cambodian government and civil society, civic engagement and legal technical assistance, the statement said.

The two prime ministers also discussed global issues related to the war in Ukraine and Myanmar.

The Phnom Penh Municipal Court questioned police officials on Monday who had investigated and collected the evidence presented against the dozens of defendants in a CNRP mass trial.

The mass trial, which includes at least 40 defendants, resumed on Monday with the questioning of police officers during the hearing. Defense lawyer Choung Chou Ngy said the evidence presented by the prosecution and police was not strong enough to inculpate his client Seng Chan Theary.

The court was scheduled to review all the evidence in the case, after weeks of discussion over individual pieces of evidence which have resulted in sparring between the prosecution and defense.

Speaking outside court, Chan Theary, who is a CNRP supporter and defendant in the case, said the trial was “not serious” and said the nine pieces of evidence presented against her did not support the charges. All defendants are charged with incitement and plotting.

“It is kind of like making fun of people’s lives,” she said, referring to the trial.

Presiding Judge Ros Piseth will resume the trial on March 28. Last week, the same court concluded another mass trial when it convicted 21 people, most senior leaders of the opposition or linked to the CNRP, for incitement, plotting and incitement to get the armed forces to disobey orders.