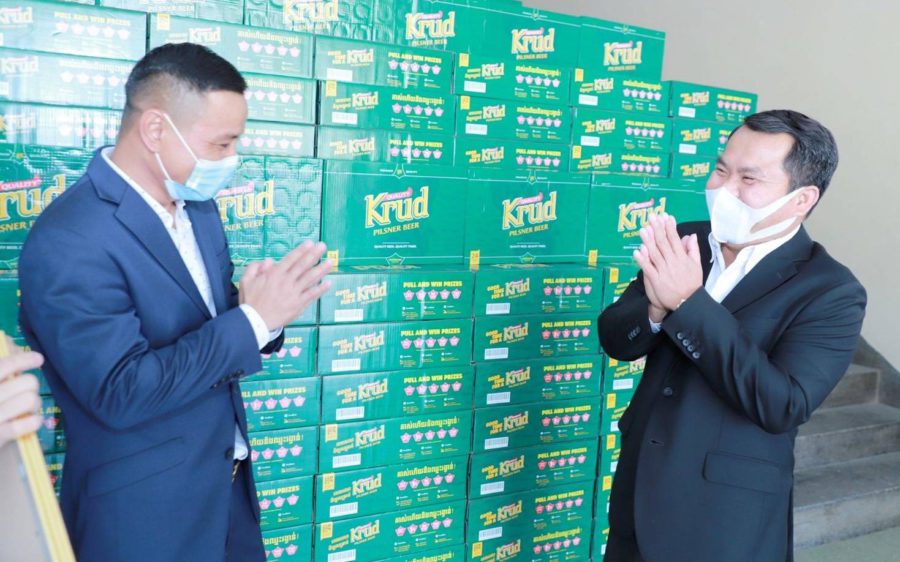 The Kandal provincial administration accepted more than 4,700 cases of beer from Vattanac Brewery on Monday, with a government spokesperson saying they welcomed all donations to the province.

The provincial administration posted photos on its Facebook page Monday with a caption saying Vattanac Brewery, producers of Krud beer, had donated 4,750 cases to be “shared with cities, districts, communes and villages in the province.”

The post had multiple photos of Kandal governor Kong Sophorn accepting the green cases of beer.

Kruy Malen, a provincial spokesperson, said the government did not have a plan on what to do with the beer. Asked if it was legal to accept such a donation, he said the province never rejects donations.

“We never deny the private company or shareholder who contributes to us,” Malen said.

“We welcome everything from philanthropists to the provincial administration. However, the governor hasn’t decided where to share with any places. Sometimes we keep it for any special events in the province.”

Shortly after the call with the reporter, the Facebook post was edited to remove words stating the beers would be shared with other parts of the province.

Chhay was with the then-Sam Rainsy Party until it merged in 2012 with Kem Sokha’s Human Rights Party.

He was banned from politics after the CNRP was dissolved in 2017 and 118 of its senior members banned from politics for five years, but applied for political amnesty through an ad-hoc mechanism created by the government to allow for banned CNRP members to rejoin politics. His application was accepted in September 2020.

Chhay, in a letter, said he started working with the Candlelight Party, formerly the Sam Rainsy Party, from March 1.

“The Candlelight Party is the party that I as well as many compatriots had joined actively because it is the party that serves and protects Cambodian people correctly,” he said in the letter posted to his Facebook page.

The Candlelight Party is one of a handful of CNRP splinter parties vying for the opposition’s vote base in the upcoming commune election on June 5.

Chhay could not be reached on Tuesday.