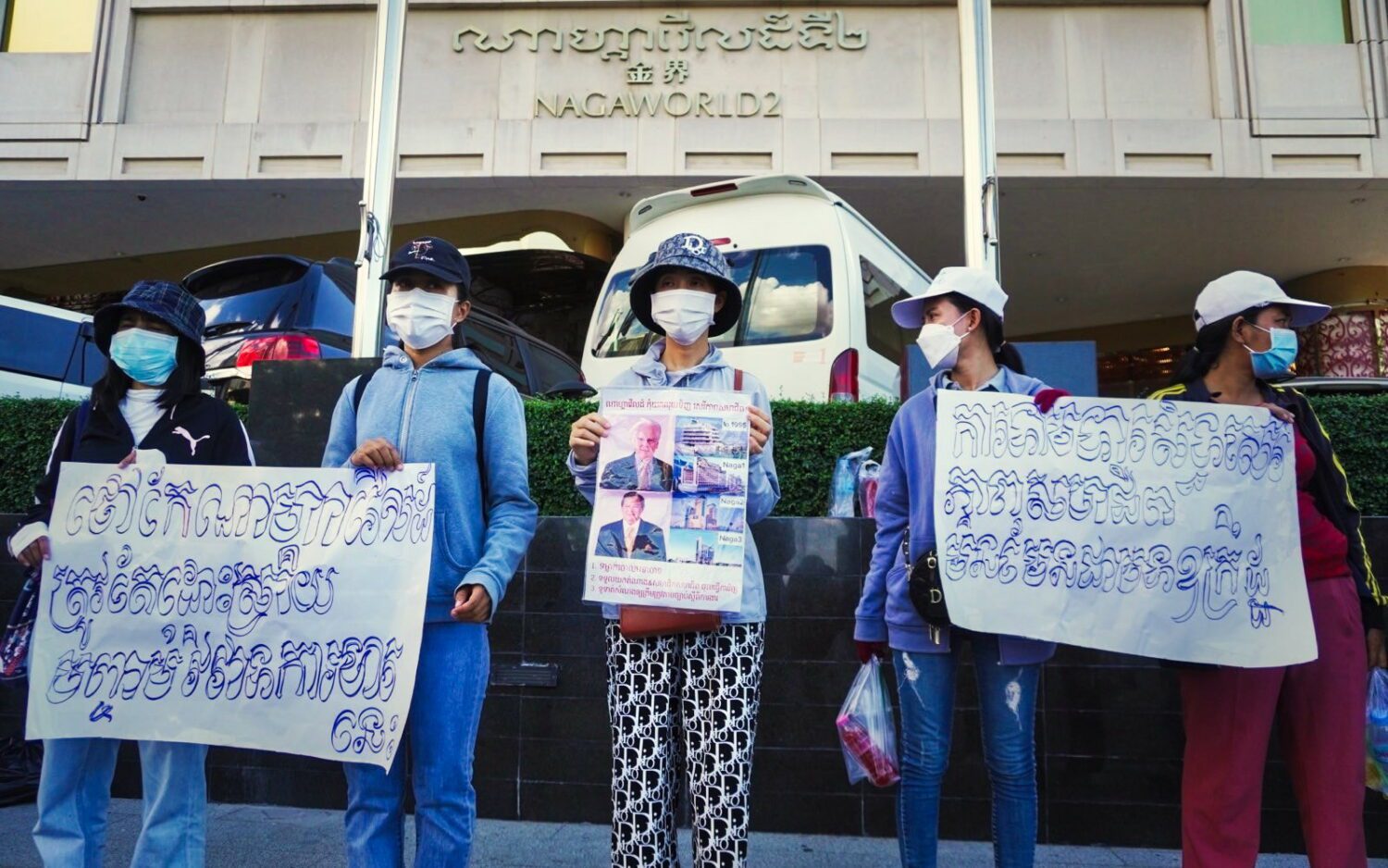 Protesters outside the NagaWorld 2 casino in Phnom Penh on September 1, 2022. (Kay Nara/VOD)

Around 50 NagaWorld workers made their way past police barricades set up on Sothearos Blvd., again allowed to reach the casino complex without hindrance.

The workers have been protesting the termination of more than 1,300 workers at NagaWorld casinos, of which around 200 are still pushing for reinstatement. Workers have been routinely blocked from nearing the casinos in central Phnom Penh, and have been met with violence from security personnel.

However, they were allowed to walk past multiple layers of barricades two weeks ago when Vitit Muntarbhorn, the U.N. rapporteur for human rights in Cambodia, monitored their protest with other U.N. staffers.

Workers were concerned authorities would resume their obstructive ways once Vitit departed, but police and security guards have allowed them to pass the barricades and continue their protests. Vitit departed last weekend and workers have been at NagaWorld casinos on August 27 and on Thursday.

Workers faced two layers of barricades at Sothearos and Sihanouk boulevards on Thursday, pushing aside one layer and lifting the other to make their way to the NagaWorld 2 casino.

Yeung Phally, one of the workers, questioned why the authorities bothered with the barricades if they were allowed to walk to the casino.

“Why don’t they take out the barricade? I still feel pressure about this. They still put the barricade on the public road, so it impacts the sellers around. I think they want to put the blame on us,” Phally said.

Prime Minister Hun Sen said Wednesday that Takhmao city’s former governor was removed from office because he failed to maintain roads in the Kandal provincial capital, where the premier resides.

The prime minister signed a sub-decree on August 22 moving Nou Sovannara from the Takhmao governorship to the provincial administration and replacing him with Khim Samphear, who was previously the deputy Khsach Kandal district governor.

Hun Sen was speaking at a groundbreaking ceremony on Wednesday for a sky bridge when he reminded officials why he had decided to oust the Takhmao governor last month.

“Please, district governors as well as the municipal governor and other deputy governors, especially for public transport, check the roads. I want to remind you to check the road,” he said. “I removed the Takhmao governor because of not having checked the roads.”

Hun Sen pointed to multiple locations in Takhmao where he had seen potholes on roads, especially the fork a road at the southern end of Hun Sen Boulevard.

“Who is the Takhmao governor? How could he not see this? So one day I just ordered to remove him,” he said. “I want to see how the new governor works and whether he knows how to check the roads or not.”