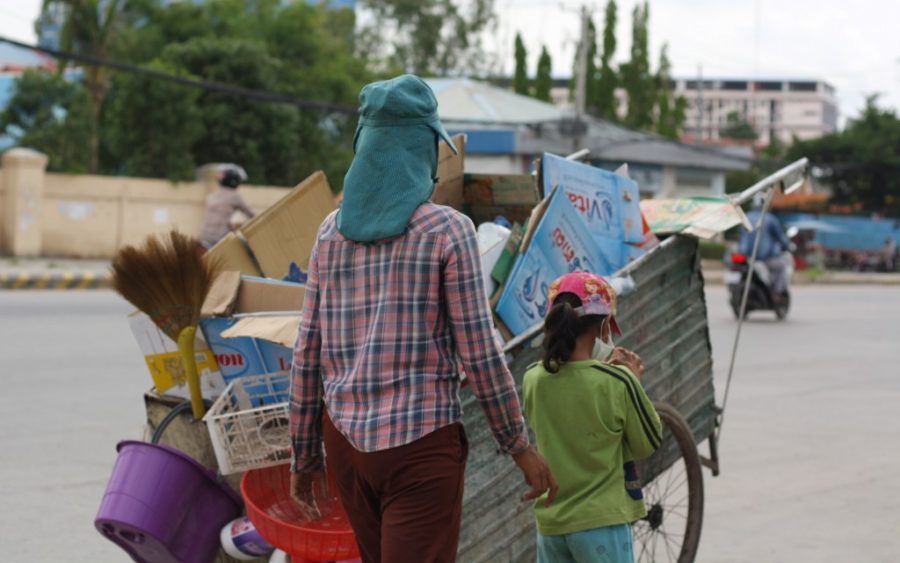 Da Sreyleath, 30, on her first day as a recycler in Phnom Penh’s Meanchey district on May 10, 2021. (Michael Dickison/VOD)

A district official in Phnom Penh has been suspended six months without pay for beating a street recycler.

Four Prampi Makara officials visited St. 164 in Veal Vong commune on Thursday to ask vehicle owners to park on the side of the road, according to a district administration statement.

The officials decided a scavenger and his cart should be brought into the district office for not being at the road’s edge, but the man insulted the officials, the statement says.

It says there was a “little violence.”

Video from the scene that has circulated online shows an official in uniform holding the man from the back while another in a button-down shirt slaps him at least twice.

The scavenger was also brought into the district office and apologized, it says, adding that no complaint will be filed.

Licadho spokesman Am Sam Ath said violence from officials was serious. “This is violence in public. And the crime, we see, is not a small thing.”

A Cambodian soldier was arrested in Thailand’s Sa Kaeo province for allegedly driving illegally into Thailand and using weapons, a defense official said.

Cambodian Defense Ministry spokesman Chhum Socheat said on Monday that according to preliminary information he had received, Sok Banphal, a lieutenant colonel in the Defense Ministry’s general secretariat, was arrested by the Thai military on Saturday.

Banphal drove a car into Thailand without permission and pulled out a pistol, Socheat said.

He said Cambodian officials were working with their counterparts in Thailand to try to resolve the issue.

Videos posted online appear to show the Cambodian soldier walking around with a pistol in his hand, and a large team of Thai authorities apprehending him on a road.

Local media reports say the soldier drove into Thailand in a black jeep from Battambang province.