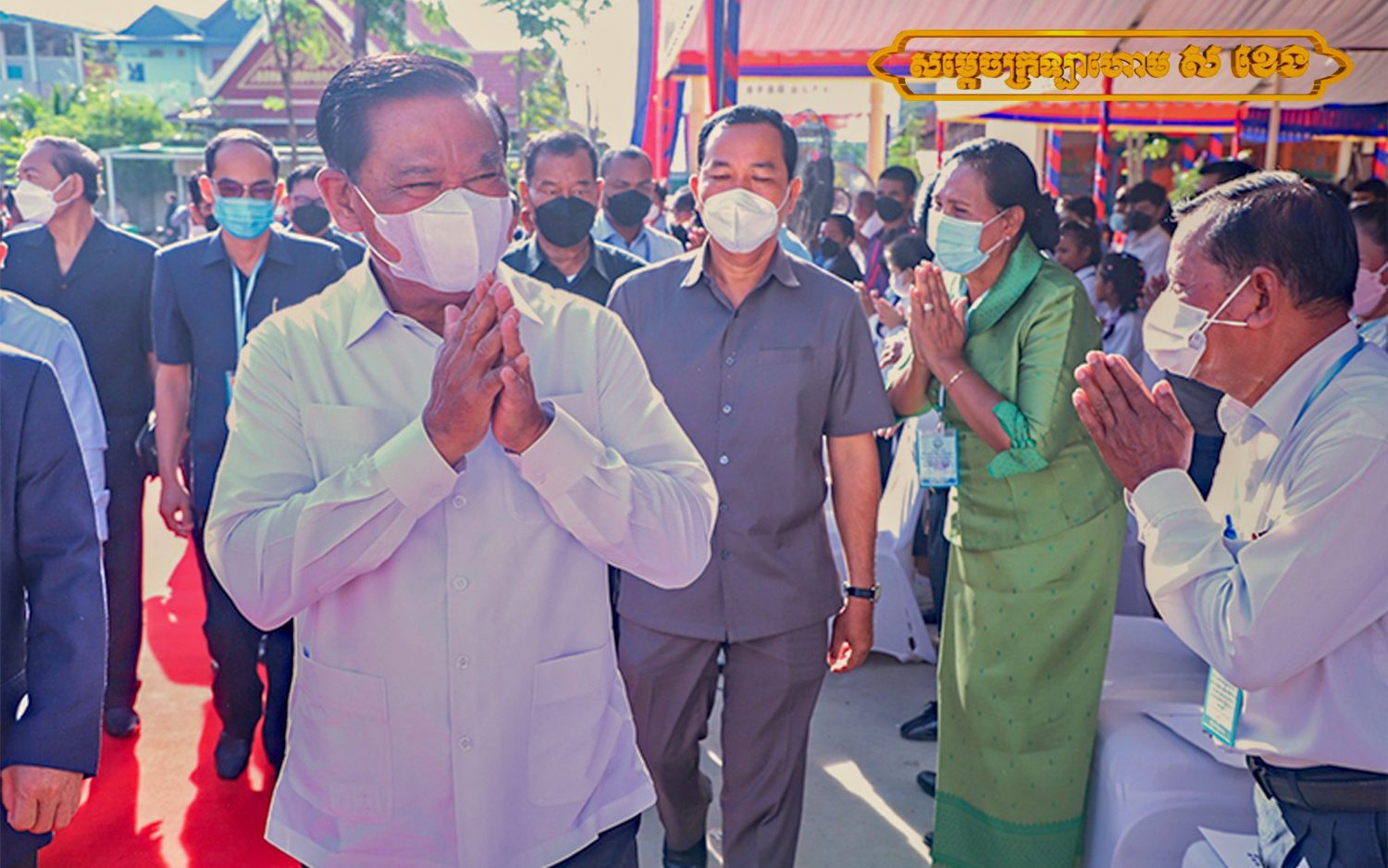 Interior Minister Sar Kheng in a photo posted to his Facebook page on July 22, 2022.

Last week, the U.S. State Department released its “Trafficking in Persons” report, where Cambodia was assigned “Tier 3,” the lowest rank, for not doing enough to tackle trafficking in the country. The report pointed to scam compounds in the country that were using forced and trafficked labor, as well highlighted longstanding problems with sex trafficking, indentured labor and abuses faced by migrant workers.

Kheng, who was speaking at the inauguration of a primary school on Saturday, said he interpreted the Tier 3 designation to mean Cambodia was showing no willingness to fight trafficking. He said the downgrade was shocking because the government was more than willing to cooperate with international partners on these issues.

He said if Cambodia was losing the fight against trafficking then it was equally a loss for the U.S.

“Simply speaking, you come here to help me and help me to win but I lose. You are also losing and it is not only I who is losing,” he said.”You come to help make it better but it is worse, so you are worse too.”

Last week, the country’s top anti-trafficking official, Chou Bun Eng, said the government would investigate accusations made in news reports and felt the lowering of Cambodia’s ranking was an “injustice.”

The founder of the Cambodian National Heart Party has asked Interior Minister Sar Kheng to intervene and ask the court to drop charges against him for allegedly forging thumbprints on a party registration document.

Seam Pluk, the founder of the party, is at an unknown location after he was summoned by the Phnom Penh Municipal Court in April for alleged irregularities in collecting necessary thumbprints from supporters. The Interior Ministry also alleged the party was linked to former CNRP president Sam Rainsy.

Pluk released a letter on his lawyer’s Facebook account and said the party was formed only to improve Cambodia’s democracy and allow people to express their “power” through elected representatives.

Pluk denied forging thumbprints and asked for the charges to be dropped against him.

“In the case that it is true there was forgery, it was an unintentional mistake, [there was] no intent to commit a crime or cause harm to any institution,” he said in the letter.

A Tbong Khmum Candlelight official has asked the court to delay questioning in a complaint filed by a former colleague at the police academy.

Eng Sruoy, a Candlelight Party chief for a Tbong Khmum working group, was fired from his job at the police academy in June 2022, with the party member alleging it was because he was affiliated to the opposition party.

Srouy said he was sued by Prak Narong, his former colleague and superior at the academy, for public defamation, defamation in the media, malicious denunciation, false information and incitement.

He was supposed to appear before the Phnom Penh Municipal Court on Friday but asked the court to delay the questioning because he didn’t have legal representation and was not prepared for the questioning.

“I do not have a lawyer yet. I am trying to find a lawyer. And secondly, because I have a lot of work. I have already asked for a delay. I submitted it this morning around 8 a.m.,” Srouy said on Friday.

Srouy said the charges stemmed from him speaking publicly about Narong slapping him on the job while debating politics with his boss. And he mentioned this incident in a media interview leading to the charges.

Three people were injured Sunday night when they were hit by a train in Phnom Penh’s Kambol district, police said.

Hang Mony, Kambol district police chief, said on Monday that around seven people were gathered on the train tracks at Kantork commune in the district when a train hit them around 8 p.m. Sunday night.

He said the group were garment workers who live nearby. “The cause [of the accident] is that they were drinking on the railway,” Mony said. “They are factory workers, staying in rental houses.”

Meth Kimsan, Kantork commune police chief, said the group had laid out a mattress on the tracks and were enjoying a meal when the train struck them.

Kantork Cheung village chief Nim Touch denied the incident took place in his village and said it happened in the nearby Ang Trakiet village. Im Korn, Ang Trakiet’s village chief, said he was not aware of the case.