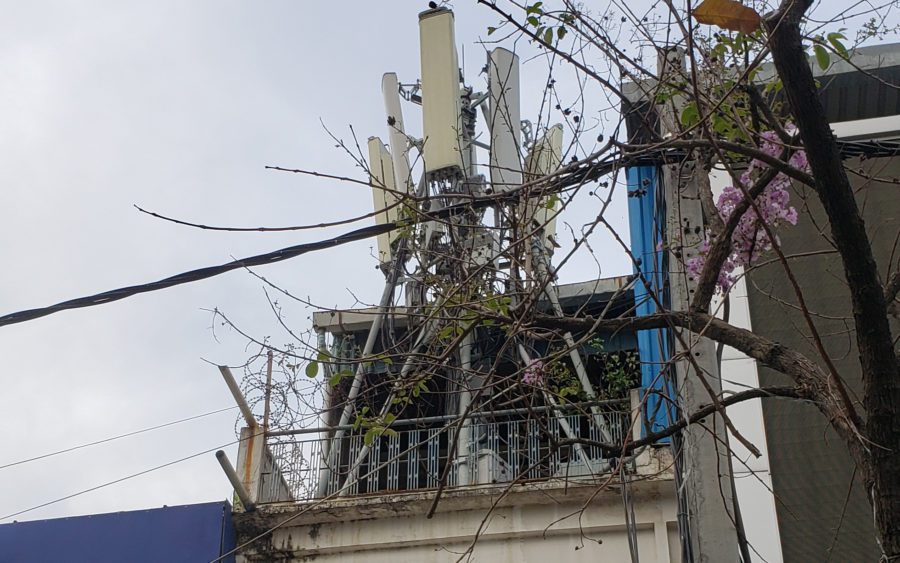 A cell phone tower built into the roof of a shophouse in Phnom Penh on December 20, 2020. (Danielle Keeton-Olsen/VOD)

Three U.N. experts, including special rapporteur to Cambodia Vitit Muntarbhorn, said the government’s decision to create a national internet gateway, where operators will be appointed to monitor and control gateways through which all online traffic will flow, would have “a devastating effect on privacy.”

The experts said the gateways would allow gateway operators to monitor online traffic, access metadata to website visits and switch off the internet or block access to websites and domains.

“To legally justify such a sweeping infringement on personal freedoms requires compliance with strict tests of legality, necessity and proportionality, including for matters of national security or public morality,” the experts said.

“It is exceedingly hard to imagine how any such legal justification may apply in this case.”

The government had blocked 17 websites, including a few news sites, just before the 2018 national election because the government could not control what outlets publish, said an Information Ministry spokesperson at the time.

Eighty percent of Cambodia’s exports come from five product categories, and almost 70 percent of merchandise go to the E.U. and U.S.

Cautioning against the country’s long-standing risk of a narrow economic base, the World Bank this week issued an “economic memorandum” suggesting policy options for increasing labor productivity, domestic investment and export diversification.

Garments, footwear, rice, cassava and tourism account for four-fifths of exports, the World Bank said, but “Cambodia has many options to address the lack of diversification and build back stronger.”

For exports, the bank said the primary cause of low diversification was low-quality foreign investment. There was little knowledge sharing and technology transfers due to barriers to doing business, including tax incentives; the government currently gives tax holidays for qualified investment projects, but tax credits could instead be used to promote innovation, it said.

The report also noted declining labor productivity growth. Rates of growth in firms’ internal productivity had been flat in most services, industrial and manufacturing sectors, which was deemed particularly concerning by the bank. Inefficient enterprises are commanding more resources than warranted, likely due to markets not being competitive or well-regulated enough, while there is “limited” value resulting from the money sunk into public investments.

“A business environment where investment opportunities can depend on knowing the right people breeds mistrust in rules-based transactions and makes the transition from informality to formality harder,” it added. “Fair competition and a level playing field have been shown to matter in other countries.”