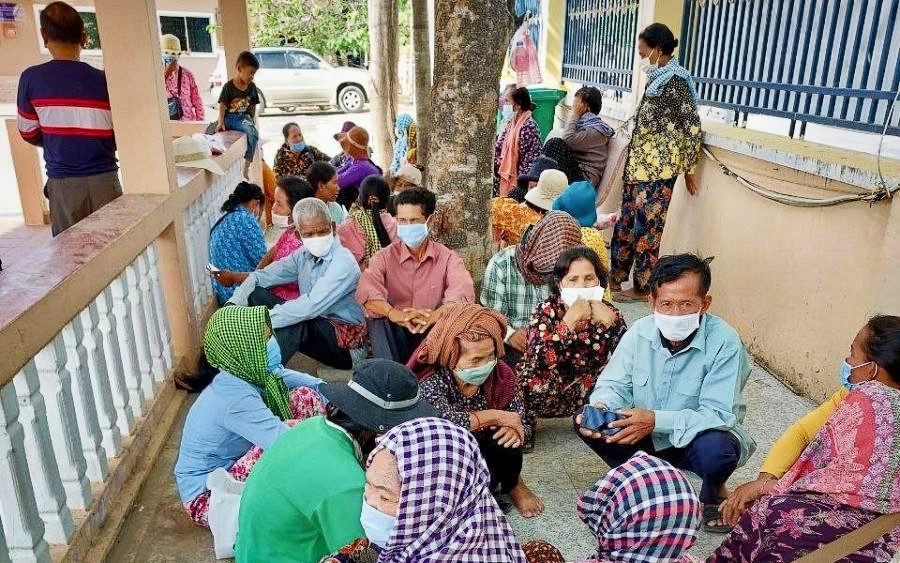 Residents affected by a new airport development project met with a Kandal district governor on March 28, 2022.

The Senate has urged action from Kandal authorities after receiving a complaint that the powerful developers of Phnom Penh’s new international airport are “bulldozing and encroaching land illegally without paying compensation to owners of the land.”

In a letter signed by acting Senate president Tep Ngon, the body relayed concerns raised by airport protesters: They are being offered compensation of only $8 per square meter even as land prices have risen to around 10 times that amount, and their land is being bulldozed even though they have not reached an agreement.

“For four years they have submitted intervention letters to the district, province and ministries many times, but there is still no proper solution for them as they request a reasonable market price,” the Senate letter says. “That’s why I would like to send this intervention letter and relevant documents to his excellency the provincial governor to check and to find a suitable solution.”

The disputed development, led by the well-connected Overseas Cambodian Investment Corporation, has seen violence amid mounting pressure and resistance.

The conflict is ongoing, as resident Aun Rum said on Monday that her land was bulldozed only a week ago. Six months after the September violence, police and military police remained around the site to prevent people from getting to land that had yet to be bulldozed, Rum added.

On Monday, about 50 representative families headed to the provincial hall for another meeting with authorities. But the provincial governor was busy, and the case was passed to the Kandal Stung district governor instead, protesters said.

Villager Saron Ton said the company was now offering $0.1 per square meter for damage to rice, but the compensation amount for land remained the same at $8.

“There was no positive result this morning,” Ton said, and alleged “deep systemic corruption” in the authorities’ response. “There must be, behind this,” he said. “So it is only samdech prime minister who can help us find a solution for the people.”

Residents who could no longer farm rice were relying on remittances from family and children from city factories and construction sites, Ton added.

Kong Phon, 70, said residents’ farming had been disrupted for three to four years.

“We will become desperate and destitute and we would rather keep the land,” he said. “There must be a solution but they turn a blind eye. … They use any kind of threat and intimidation against villagers to accept the $8.”

Phon said around 30 percent of residents had taken the $8 compensation.

“Nothing has changed, and the price is still the same. We are implementing the policy that has been set at $8 per square meter. It cannot be solved by the district and we can only implement the policy.”