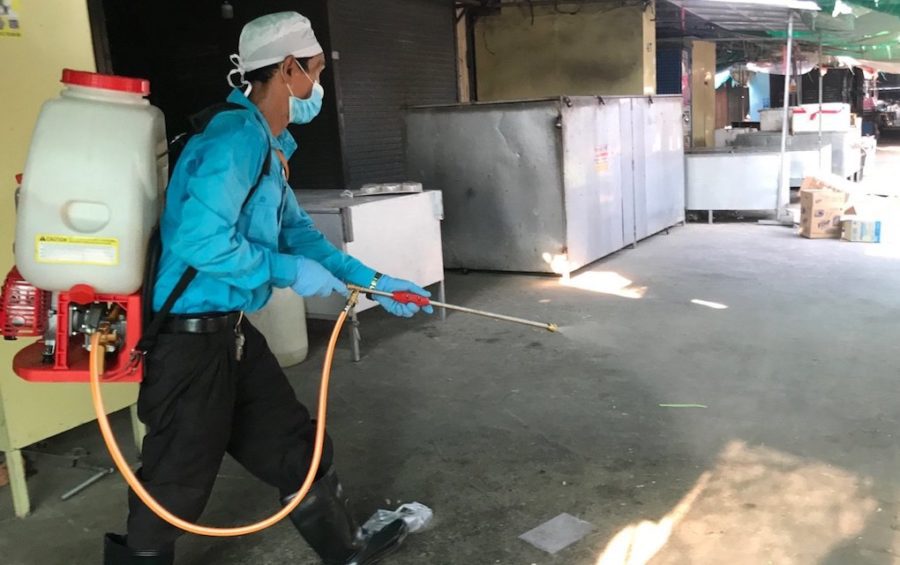 Some residents of locked-down Kandal province villages say they must stay home and are being checked by police and health officers daily after more than 80 Covid-19 cases were found in two days and the district ordered all businesses to close.

“To prevent the transmission of Covid-19 in the community on a large scale, the district administration asks the owners of all types of businesses to suspend their operations temporarily from the date of this announcement until further notice,” it said.

The latest nationwide cluster, which began on February 20, is the country’s worst to date, with more than 660 active cases across the country, leading to school closures in several provinces. Some provinces, such as Siem Reap, are quarantining all arrivals from hotspots like Phnom Penh, while Prime Minister Hun Sen asked that all weddings be postponed to prevent large gatherings.

In Chrey Thom village, a resident, Sambath, who declined to give his full name, said by phone that villagers were concerned for their livelihoods and getting enough to eat as they were not allowed to trade or go out to buy supplies.

“A few people are struggling a lot,” Sambath said. “Now the authorities have asked us to stay only at home — we are not allowed to go outside the house.”

The area has six casinos near the Vietnamese border that have been shut down and turned into quarantine centers for workers. Sambath said that at least the people quarantined there had food delivered to them.

“This morning police walked from house to house and instructed us to stop our businesses. … When the authorities close things down like this, it’s very difficult. We have no income.”

Another resident of the village, Pao, who also would not give his name, said police and health officers checked on the villagers every day.

“We cannot leave our house,” he said. The local market had already been closed about three days ago, Pao added.

“We are not allowed to visit other people’s houses because the number of Covid-19 cases has increased significantly.”

Kandal governor Kong Sophorn could not be reached for comment, while Koh Thom district governor Eng Sovicheat declined to comment.

Sampov Puon commune chief Ouk Sron said travel in and out of the three villages had been halted.

“We’ve cordoned off the locations. We need to cut off their [movements] … to stop the spread,” Sron said.

Samraong district’s Choeung Kuon commune chief Pouk Hor said one village was locked down because a 16-year-old casino worker at Kandal’s Koh Thom had returned to the village about two weeks ago and had a fever.

“We’ve taken his sample and closed the village temporarily in case he is infected,” Hor said. “There are more than 100 families and people are not allowed to go in or out.”

Chumreah Pen commune chief Yoeth Siv, also in Samraong, said another village was locked down due to contact with a Cintri worker from Phnom Penh who came to visit his wife on Saturday.

He had a fever of 39 degrees Celsius, and this morning his Covid-19 test came back positive, Siv said.

“Since we found it in a timely manner, it is not complicated,” he said. “Anyone who comes to this commune must be checked.”