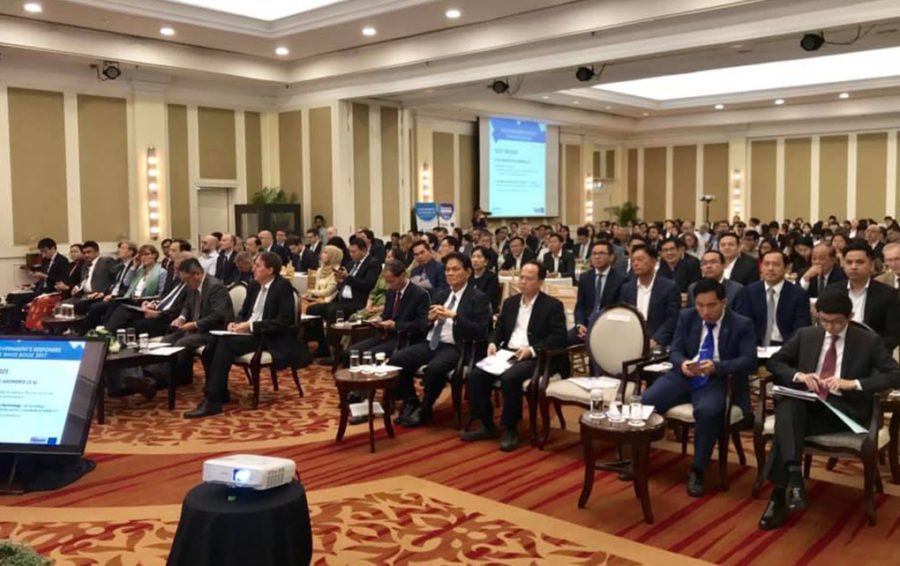 The Cambodia- EU Dialogue and the WhiteBook 2019 Launch event on July 01, 2019. Image: Facebook of EuroCham Cambodia

The European Chamber of Commerce in Cambodia has proposed the creation of a Supreme Administrative Court and independent review mechanisms within government agencies so businesses can have the law applied more consistently.

In its third “White Book” — a comprehensive set of trade and policy recommendations — EuroCham suggested that one of the main deterrents to European investment in the country was delayed and inconsistent decisions by officials, including during the issuance of business licenses.

“At present, there is no mechanism through which businesses can request to have decisions or actions taken by public officials independently reviewed to ensure that they are in accordance with the Kingdom’s laws and regulations, and to establish whether these legal instruments are being applied consistently and indiscriminately,” the chamber said.

The establishment of such review mechanisms would increase investor confidence and contribute to better law enforcement in the country, it said.

International banks and credit institutions were currently reluctant to provide funds to invest in Cambodia if they perceived the legal risks to be too high, it added.

“Many countries, including regional neighbours such as Thailand and Vietnam, have in place a system of Administrative Courts through which private individuals or businesses that perceive themselves to have been treated irregularly by a public body can make an appeal and request to have their case independently reviewed,” it said.

Public Works Ministry spokesman Chhoeun Bunnarath said existing courts could handle disputes related to public officials’ decisions, though he added that he would be open to reform.

Chin Malin, Justice Ministry spokesman and director of legal and judicial reform, could not be reached for comment.

Legal expert Sok Sam Oeun agreed with EuroCham’s recommendation, saying a specialized court would reduce confusion in the current system, where businesses and lawyers could be unsure about even basic points such as to which court they should file complaints.

And even if businesses chose to complain to the Phnom Penh Municipal Court, for example, there were no judges expert in business law, he said.

According to the World Bank’s ease of doing business survey, Cambodia is still struggling to lower barriers of entry for business and investment, ranking 138th out of 190 worldwide and seventh out of 10 in Asean.