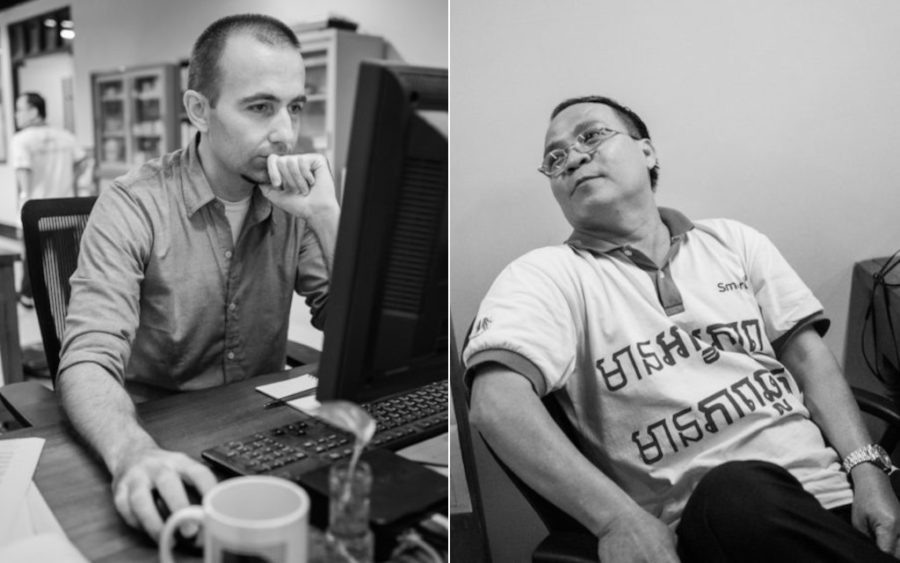 A lawyer representing two former Cambodia Daily reporters was hopeful the Tbong Khmum Appeal Court would uphold a lower court decision to drop incitement charges against them after a prosecutor said there was no new evidence to reinstate the charges.

Aun Pheap and Zsombor Peter, who worked for the Cambodia Daily, were accused of incitement while reporting a commune election story in Ratanakiri province in 2017. They were reporting in Pate commune, which was the only Ratanakiri commune the CPP did not win in 2012.

A Ratanakiri court had dropped the incitement charge against the journalists, but the verdict was appealed by the provincial prosecution. The charges were dropped after one of the plaintiffs in the case — Roman Yuot, who was a Sam Rainsy Party commune chief in 2017 — withdrew his complaint during the trial hearing. An Appeal Court hearing was scheduled for Thursday.

Sek Sophorn, the journalists’ lawyer, said the Appeal Court prosecutor informed the court on Thursday there was no new evidence to support reinstatement of the charges.

“He said the Ratanakiri court was right. So he doesn’t see any other evidence to charge them,” Sophorn said, relaying the prosecutor’s comments in court.

“He said the act of interviewing by Zsombor and Aun Pheap was not a problem.”

He said the Appeal Court prosecutor’s position was the opposite of the Ratanakiri prosecutor.

Sophorn said he reminded the court that nothing in the reporters’ reportage was incendiary.

“They just went there to do an interview and publish a story. There was no term or act in the article that was incitement,” the defense lawyer said.

Shortly after the charges were filed in 2017, the Cambodia Daily was slapped with an exorbitant tax bill by the government and forced to close in early September 2017.

Peter, one of the two reporters, said he was not hopeful the case will be dropped even after the judges deliver their verdict.

“As the original decision was appealed for no good reason, a decision by this court to drop the case can be appealed just as easily and drag the case out even longer merely to harass us,” Peter said.

Given that this case had stretched on for over four years, Peter said it was an “indictment” of the Cambodian legal system.

A spokesperson for the prosecution declined to comment, referring questions to the court.