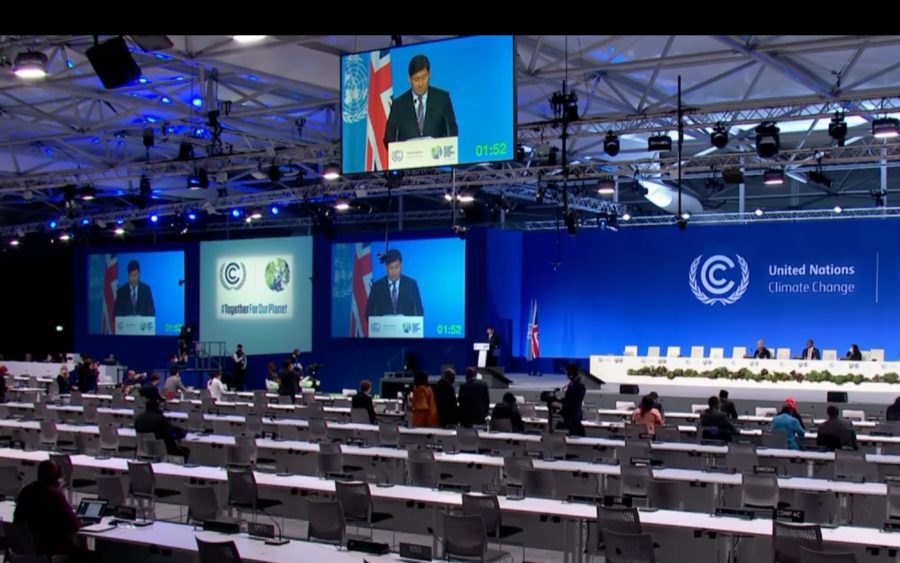 Cambodian Environment Minister Say Samal made no commitments to achieve net-zero emissions at the Wednesday session of the COP26 Climate Conference.

Though Cambodia had disappointed environmental activists last week by withholding approval of a pledge to protect its forests, the environment minister rolled through a brief list of climate-related achievements during his roughly five minutes at the podium. He also touched again on Cambodia’s pledge to reduce emissions by 42 percent by 2030, a goal the country has tied to dubious carbon offsets through REDD+ projects.

“We have tripled our climate budget in the last five years, now around 2 percent of our GDP,” Samal said. “We have commissioned over 400 megawatts of our utility scale [from] solar energies, which is about 15 percent of our energy mix.”

The minister also told his fellow delegates in Glasgow, Scotland, that Cambodia is increasing its production of cleaner energy, will not develop any new coal power plants and has stopped constructing hydropower dams along the Mekong River.

Though he didn’t mention the forestry pledge, Samal alluded to natural environments while announcing the emissions target, by briefly adding that “our forests, our national total biomass, is bigger than ever before.”

Even while counting rubber and palm plantations as tree cover, that claim is disputed by advocacy groups who say deforestation has continued unabated. Environmental research organization Global Forest Watch estimates about 40 percent of Cambodia was forested in 2010 and shed 1.81 million hectares of tree cover in the decade since. Such a rate of deforestation would release an estimated 1.1 gigatons of emissions.

The forest watchdog documents tens of thousands of hectares of deforestation in Cambodia every year.

Still, the minister said Cambodia is “formulating a long-term strategy for carbon neutrality, promoting activity that can deliver low carbon, climate resilience and including growth.”

“This also helps us see the opportunity of [a] green economy, a major driver of growth in investment and innovation in the coming decade,” he said.

Other observers, including U.K. ambassador Tina Redshaw, had hoped Cambodia would announce a net-zero pledge for carbon neutrality. The ambassador registered her feelings on Twitter after Samal’s remarks.

“Watched Cambodia’s remarks at COP26. Whilst Cambodia’s NDCs have improved from previous iterations it is a missed opportunity to show leadership and ambition ahead of ASEAN Chairmanship,” Redshaw wrote, referring to Nationally Determined Contributions.

“Disappointed at the lack of a net-zero emission date and commitment to the forest and land-use declaration and energy day statements. Developed countries do need to step up financing but require clear commitment to change unsustainable practices.”

Cambodia released its updated Nationally Determined Contributions in 2020, where it made the 42 percent emission reduction promise. The Cambodian NDC, which is a country’s roadmap to realizing the promises of the 2015 Paris climate agreement, makes no mention of net-zero emissions.