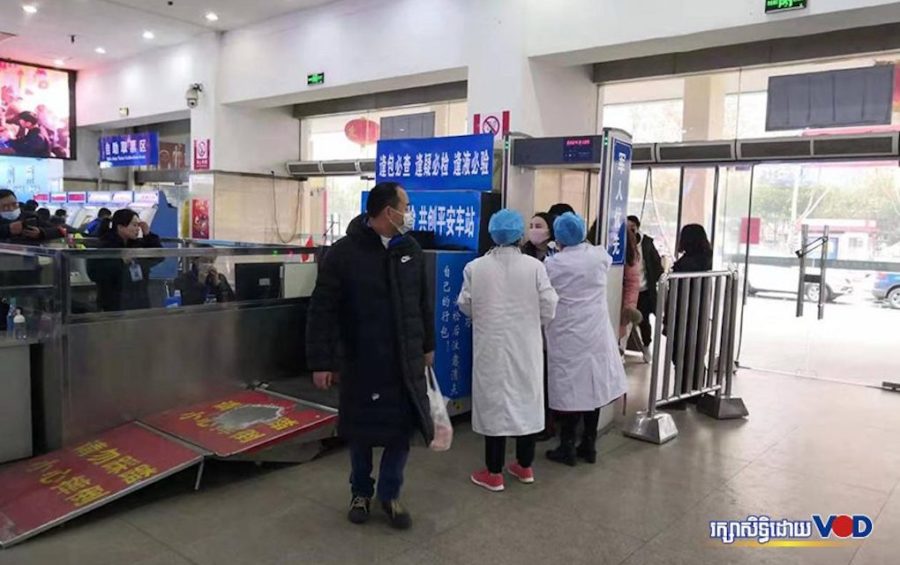 Cambodian university students say they’re worried about contracting a new respiratory virus while studying in China where about 2,000 cases of the illness have been reported and more than 50 people have died.

Students in Beijing, Tianjin and Wuhan — the latter of which is in Hubei province where 52 of 56 deaths occurred, and most of the 29 confirmed cases outside China had traveled — expressed fears of leaving their school dormitories over the Lunar New Year holiday and risking catching the new strain of coronavirus.

More than 2,000 confirmed cases of the novel coronavirus (2019-nCoV) have been reported globally, with the majority found in China, the World Health Organization (WHO) said.

Five cases have also been reported in Thailand; four in Singapore and Australia; three in Malaysia, Japan and France; and two cases each in Vietnam, South Korea and the U.S., according to a WHO report from Sunday.

Health Minister Mam Bunheng announced on Monday evening that Cambodia had confirmed its first case of the virus.

On December 31, WHO was informed of a cluster of pneumonia cases of unknown origin detected in Hubei’s Wuhan city.

One student in Wuhan said he was stuck in the city after flights were canceled and asked for Cambodian officials to help evacuate him and his peers.

Chanthorn Raksmey, who is pursuing a bachelor’s degree in mechanical engineering at Huazhong University of Science and Technology, said he and his friends had bought plane tickets to depart from Wuhan on Friday morning due to fears of becoming ill. But authorities attempting to contain the spread of the virus canceled flights from that area before they could leave.

“Unfortunately, after we bought the tickets, the next day, the Chinese government announced the closure of the airport,” Raksmey said on Saturday. “We were shocked.”

He said the Cambodian Embassy in China has so far not helped the 20 Cambodian students stranded in Wuhan, other than by communicating through a Cambodian student association that they should take care of themselves and stay healthy.

Concerned for his and his friends’ well-being, Raksmey requested that the embassy and the Cambodian government facilitate their evacuation from Wuhan.

“If the condition of the disease worsens, I, on behalf of the students in Wuhan who are stuck in Wuhan, would like to request the government as well as the Cambodian Embassy in China to please pay attention to us,” Raksmey told VOD.

“If it is possible, we would like [the government] to evacuate all Cambodian students who are staying in Wuhan from Wuhan city and return to Cambodia,” he said.

About 2,500 Cambodians were studying in China, with about half returning home during the holiday break, said Nop Veasna, president of the Cambodian Students’ Association in China.

Veasna said the association has monitored the spread of coronavirus and continues to check in with students in China as well as the Chinese Embassy in Cambodia.

Foreign Affairs Ministry spokesman Koy Kuong told VOD that the ministry was always ready to assist Cambodian students and other nationals living in China, but there was no plan to evacuate them.

The Cambodian Embassy in Beijing and provincial consulates were in regular contact with Cambodian citizens, and if they had any problems, they could contact officials, Kuong said.

He called on students living in China to remain cautious.

“If we avoid frequent visiting and wandering, it will reduce [the risk]. They need to be aware,” Kuong said.

Students in China told VOD they were hunkering down in their dormitories, as recommended by their universities.

Korng Saoraksmey, who is enrolled in a Chinese language preparation class at the University of International Business and Economics in Beijing, said he and seven other Cambodian students who were staying in school dormitories over the Lunar New Year holiday were frightened by the coronavirus’s rapid spread.

They had wanted to return to Cambodia, but were worried that going to the airport could result in them contracting the virus, Saoraksmey said.

“Frankly, I am scared because it is so quick from day to day. And now I want to go home, but I fear getting infected when arriving at the airport with a lot of people,” he told VOD.

The university had advised students not to leave their rooms unless necessary, and staff were checking in with them regularly, he said.

Sam Borey, another student who is pursuing a master’s degree at Beijing International Studies University, said since the viral outbreak, the school’s surroundings — which used to be crowded, especially during Lunar New Year — have become quiet. Borey said she was afraid to go out, even to the market for food.

The second-year accounting student said if she does venture out, shopping is a challenge.

Some markets near her school are open only in the morning and most of the products on sale are not fresh, Borey said. Protective masks that had previously sold for about 20 yuan (about $3) now cost 100 yuan (about $15).

She plans to return home in March, but is worried about her health when traveling to airports used by people from all over China.

Another student, Soam Pech Dollar, who is studying at Tianjin University in Tianjin city near Beijing, said despite student association and school staff reminders to practice good hygiene and wash their hands often, he hasn’t dared to leave his university campus.

While he usually ordered food online, now the student said he was afraid of catching the virus from someone delivering his dinner.

“The food delivery workers arrive by driving motorbikes in and out so I’m worried about getting the virus infection from them while getting food,” he said.