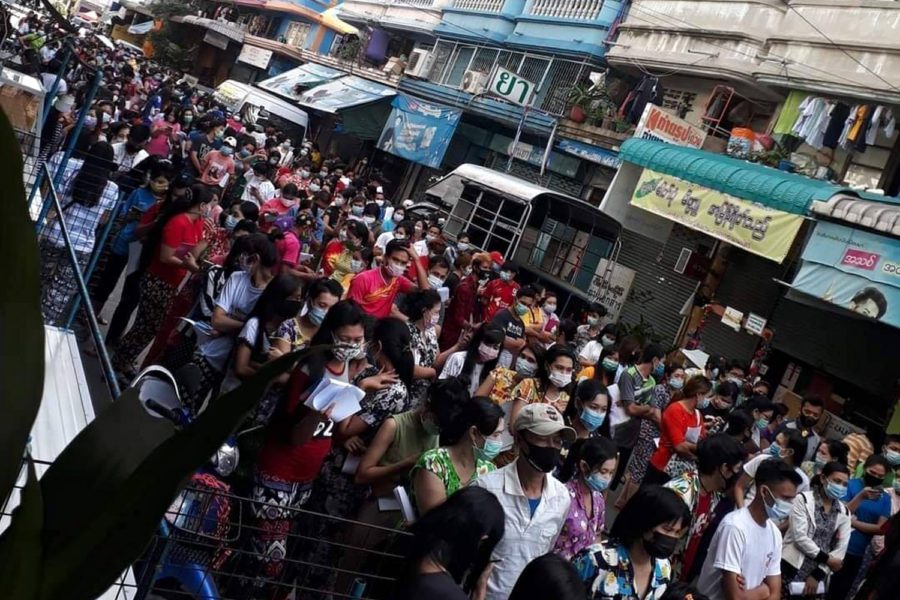 People in Thailand’s Samut Sakhon province line up to get tested for Covid-19 on December 20, 2020. (Labor Protection Network Foundation)

Amid a cluster of Covid-19 cases originating at a seafood market, Cambodian workers in Thailand’s Samut Sakhon province say they are getting tested or being asked to not leave from their workplaces and dormitories to avoid the spread of the disease.

More than 1,000 people have tested positive for Covid-19 in Thailand this week in relation to a cluster that emerged around a shrimp market in Samut Sakhon over the weekend.

Construction worker Sou Sothy, 43, said on Wednesday that his workers’ dormitories were just 300 meters from the market, but he and other workers had not been required to get tested for Covid-19 yet.

Instead, workers were trucked straight from the dormitories to the construction site and back, and were currently not allowed to go anywhere else, even for food, Sothy said.

“We have worked normally. But we are not allowed to even go for a walk or anywhere else,” he said.

“We’re really very worried. We would face difficulties if we get infected,” he said, explaining he was particularly concerned about the potential costs of treatment.

The workers currently no longer work overtime, so total wages had dropped to about half of what they used to get, Sothy added.

Neang Nak, another Cambodian construction worker in Samut Sakhon, said by phone on Tuesday as he was standing in line for a Covid-19 test that he had followed local authorities’ advice to get tested.

“I am afraid too but don’t know what to do. We’ve come to live in another country to work. If we can’t work, we will have nothing to eat,” he said. There were 50 to 60 Cambodians working at his construction site, he added.

Prak Pheaktra, an officer for NGO the Labor Protection Network Foundation, said that further to the east, Chonburi provincial authorities had announced on Wednesday that a 19-year-old Cambodian woman who crossed into Thailand illegally on December 17 tested positive. She and close contacts were being treated and quarantined, he said. However, Cambodian authorities said on Thursday that the case was not confirmed.

Pheaktra added that more should be done to make sure foreign workers, including Cambodians, were kept well-informed about public health developments.

“I think the risk is very high because workers do not get as much information as Thai citizens, because sometimes they are at their workplaces and no institution goes to inform them there,” he said.

Roughly 10 percent of Cambodian migrants in Thailand were in Samut Sakhorn, he said, mostly in the construction and fishing sectors. Pheaktra said fishers were currently at especially high risk due to their exposure to seafood markets.

Foreign Affairs Ministry spokesperson Koy Kuong said there were about 10,000 Cambodian workers in Samut Sakhon, and none of them had contracted Covid-19. He said on Thursday that reports of a Cambodian woman testing positive in Chonburi had not been confirmed.

Thy Muntha, a Cambodian manager at a Japanese food production factory in Ayutthaya province, north of Bangkok, said the workers at her factory had been asked to restrict their travel by not going to crowded places, including buying food at markets, for two weeks until January 4.

About 400 foreign workers, including 140 Cambodians, live at the factory, and those who want to go outside need to ask for permission, she said.

“If any of our workers disobey the discipline imposed by the factory, they will be put in quarantine without getting wages,” Muntha said.