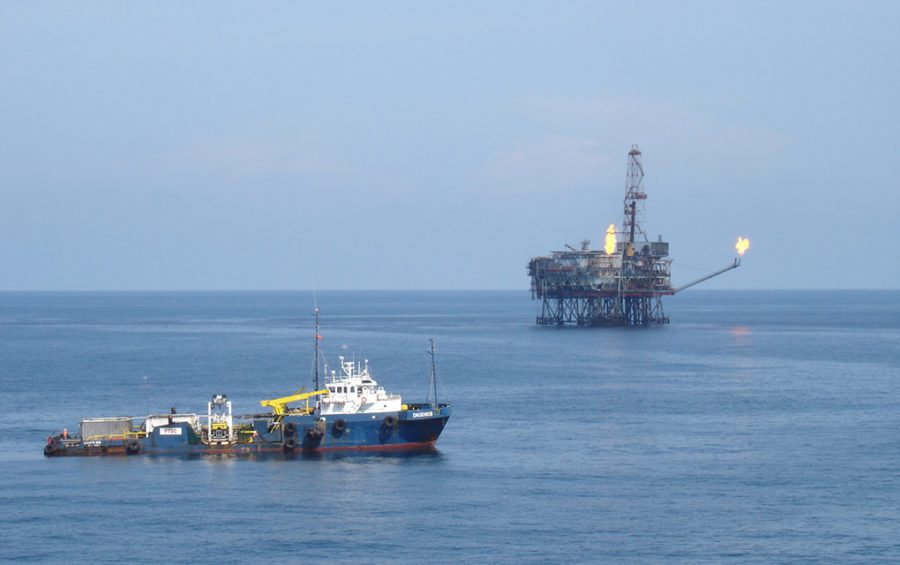 A vessel passes an oil rig platform in the Vung Tau Oil Field off the coast of Vietnam in 2005. (Wikimedia Commons)

Cambodia has aspired to draw oil since deposits were discovered off Preah Sihanouk province’s coast more than 15 years ago. But an offshore oil field licensee has missed another deadline for producing the nation’s first oil, which the firm initially promised last year, and now faces a heavy debt load and a global slowdown in oil and gas exploration.

KrisEnergy, a Singapore-based oil and gas company, is licensed to extract oil in Cambodia’s Block A territory about 150 kilometers off the coast in the Gulf of Thailand. The company missed a deadline on Tuesday to produce oil from the block, but the Cambodian government has given the firm until the end of this year to produce oil or potentially lose its drilling rights.

The government holds a 5 percent stake in Block A, the rest of which belongs to KrisEnergy, and under the Petroleum Law updated last year, the state also owns all the nation’s petroleum resources.

Tanya Pang, KrisEnergy’s vice president of investor relations, said that the Cambodian government has so far not made any decision to penalize the company for missing its earlier deadline and has extended KrisEnergy’s production to the end of the year.

“At this time, both [the] Government and KrisEnergy are focused on ensuring first oil is achieved within 2020 especially given the logistical challenges raised by COVID-19,” she said in an email.

In an April disclosure, KrisEnergy said the government had suggested there would be “serious consequences,” which could include the termination of concession rights, if the company did not produce the first drops of oil from Block A and secure funding to achieve steady production by December 31.

KrisEnergy has delayed its oil production goals from Block A, a 3,000-square-kilometer area in the Gulf of Thailand called the Apsara Block, multiple times since it acquired production rights in 2017.

The firm had initially said it would produce the first drops of Cambodian oil in 2019, according to its 2017 annual report. But by the time KrisEnergy released its 2019 annual report in February, the company was saying that it expected to  produce oil by the middle of this year. Then, disclosures in April once again updated the deadline to draw first oil to before the end of 2020.

KrisEnergy’s Pang said the company had been stalled by “the many moving parts in an offshore oil development,” starting with negotiations with subcontractors through last year, and then slowed down further as Covid-19 restrictions impacted the sourcing of equipment, materials and services.

The company announced in April that it had secured an $87 million loan from Kepinvest Singapore Pte. to reach first oil production and manage all the financial and advisory expenses related to it. KrisEnergy also pared down its plans for the block’s initial development into a “mini” first phase, including the drilling of five development wells, and reported last month that work was progressing on refurbishment of a barge and construction of a wellhead platform to serve the block.

“Without the required funding, development of Mini Phase 1A will not be completed, and the Cambodian government would terminate the concession rights and the Group would lose the asset,” the firm said in April.

Pang said the company’s assessment of the oil deposits in Block A, which showed the potential to produce 7,500 barrels of oil per day at peak, had not changed, and this early development phase would reveal more information about the basin’s oil reserves.

While the company is pushing forward with the Apsara block, investor disclosures suggest that the company has to manage its debt in order to continue with the development.

While the company bought out Chevron’s stakes and became the primary operator for Block A in 2014, and gained its license to produce petroleum from the government in 2017, KrisEnergy was already laden with debt before that year.

The firm reported a loss after tax of nearly $169 million in 2019, and KrisEnergy’s total debt at the end of last year was more than $503 million, according to its 2019 annual report.

The company’s “balance sheet is clearly unsustainable, and a substantial reorganisation of liabilities and assets is urgently needed,” it states.

In an April disclosure regarding Keppel Corporation’s $87 million loan for Block A, the company said it conducted a broad search for an investor to fund the Cambodian project and had a hard time gaining lines of credit that could sufficiently cover expenses of development from lenders outside the Singapore-based Keppel, the parent company of Kepinvest.

Earlier in the year, KrisEnergy announced that it would pass 100 percent of its working interest in an oil and gas block off the coast of Vietnam to an unnamed “major international oil and gas company,” though the transfer was delayed. Meanwhile in Thailand, the company suspended production in early June at its Wassana oil field, which produced 3,605 barrels of oil per day on average. Later in the month creditor Rubicon Vantage International served a winding-up petition to liquidate one of KrisEnergy’s key subsidiaries, arguing that the firm couldn’t pay its debt. The company is attempting to block the move in court.

The company described in a June presentation to investors that it must restructure all unsecured and some of its secured debt by July 15 as a concession in order to access the second part of Kepinvest’s loan, which is worth $57 million.

“However, KrisEnergy cannot continue to support its current capital structure and risk the development of Block A if a consensual restructuring is not implementable,” the company said.

KrisEnergy justified the loan in its April announcement, noting that plummeting oil prices between 2014 and 2017 “severely impeded” the group’s ability to raise funds. However, global oil and gas prices took much harder hits this year than in the past, as the global Covid-19 pandemic and its ensuing economic crisis has sent shockwaves throughout the oil and gas industry.

Oil prices have recovered since falling below zero in late April, but analysts say a recovery that would encourage oil and gas exploration and developments, which are risky by nature, is far off.

Stephen Higgins, founding partner of the Phnom Penh-based investment advisory firm Mekong Strategic Partners, said major oil and gas corporations’ decisions to gouge their assets last month do not bode well for an exploratory market like Cambodia. Shell announced Tuesday that it would slash $22 billion from its oil and gas assets, while earlier in June competitor BP said it would write down $17.5 billion.

“In recent days we have seen BP and Shell take massive write-downs on the value of their investments, as they believe the oil price will be lower, for longer,” Higgins said in an email. “In this environment, we don’t see extraction of oil from the fields off Cambodia as being economic.”

Though he would not speak about the status of a specific company, Andrew Harwood, Asia-Pacific upstream oil and gas research director for energy research firm Wood Mackenzie, told VOD last week that the global economic downturn will put more pressure on companies that were already under financial strain before Covid-19 rattled the oil and gas industry.

“Whether it’s countries that are struggling to attract upstream investment, whether it’s resource teams that are seen as high cost or with long payback periods, or whether it’s companies in financial trouble, the big focus coming into the downturn this time around has been on the corporate financial strength and portfolio resilience, and it’s those that were already on shaky ground that are going to face the worst of it,” Harwood said.

Wood MacKenzie’s research analyst, Saloni Kapoor, noted that Cambodia could have upstream potential due to its broad offerings for offshore and onshore blocks — a majority of which are not yet licensed. The government could modify regulations around oil and gas to better incentivize investment, Kapoor said.

Cambodia signed its second petroleum agreement in February for exploration of Block D, a 5,500-square-kilometer area also within the Khmer Basin in the Gulf of Thailand, according to state news site AKP. Harwood said that there was investor interest in the Overlapping Claims Area, a long-disputed 27,000-square-kilometer territory between Cambodia and Thailand that’s expected to hold significant oil reserves.

However, Harwood said that even if the government can settle territorial disputes or appeal to foreign investors that specialize in upstream development, the global oil and gas market might need at least four to five years for exploration to be attractive again.

“[The Cambodian government] is doing so at a time where global investor appetite for oil and gas investment is, and certainly global upstream investment budgets, are under pressure,” he said. “They’re being reduced, so companies are looking at where they can reduce their [investment] footprint rather than expand it at the moment.”