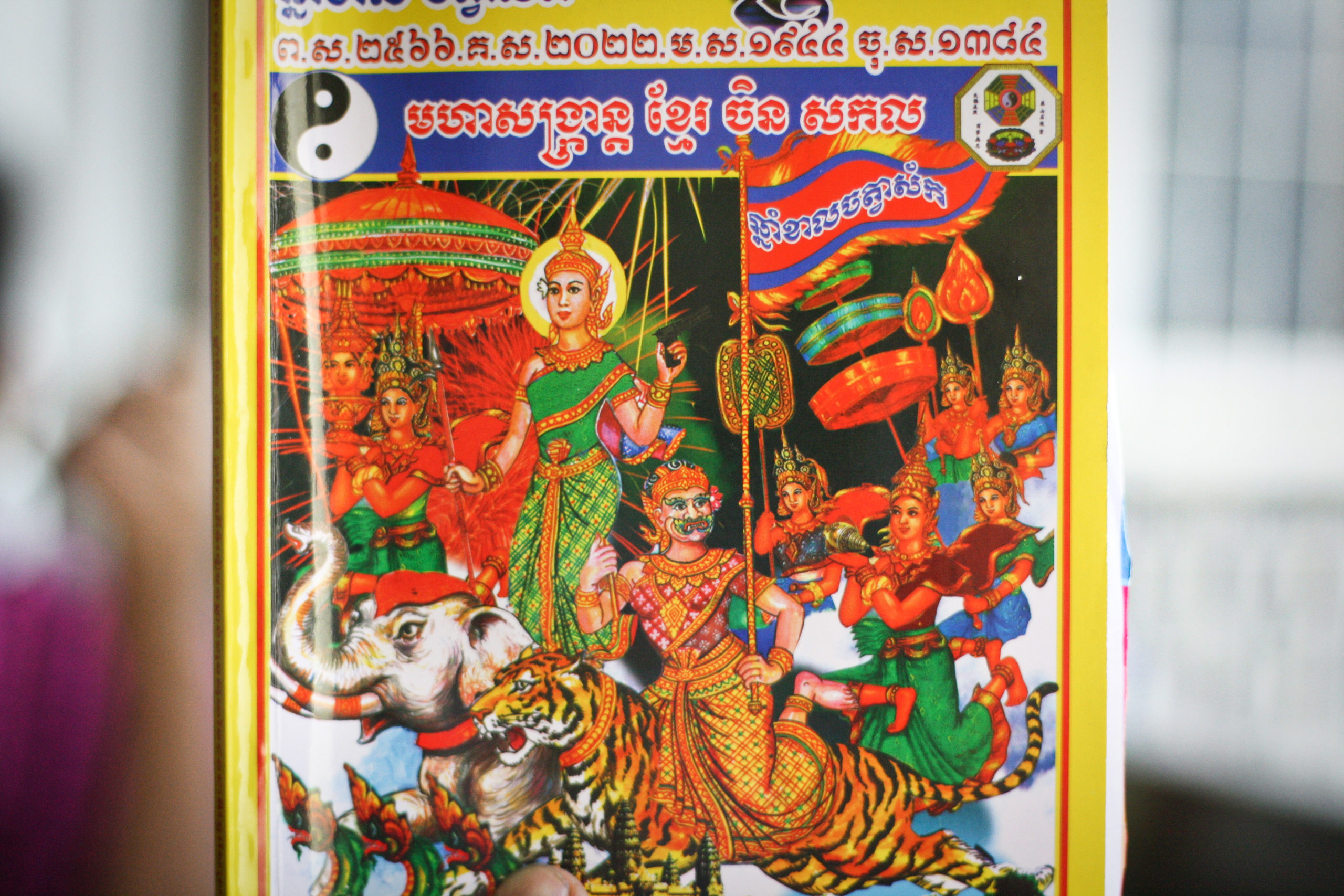 The cover of the 2022 Moha Sangkran almanac. (VOD)

Astrologer Im Borin says the Khmer New Year angel will descend to Earth next Thursday holding a gun in her left hand to protect Cambodia’s borders.

The event will mark the start of the Khmer year of the tiger, which has been officially foretold to see much rain, a lake swelling to the largest it has ever been, equal parts happiness and misery for farmers, and good living for people alongside many lies and deceptions.

Borin, who is the director of the country’s official research committee on astrology and Khmer traditions, on Thursday gave a brief explanation of the meaning behind the armed angel, saying there was no need to wonder as it is there for a reason.

The astrologer is a former official and now adviser to the Ministry of Cults and Religion, and famously authors the “Moha Sangkran” almanac published annually since 1998 by the ministry-established astrology committee. The colorful book contains around 200 pages of predictions for the upcoming year.

Borin described the picture of the angel that is printed on the cover of the almanac: In her left hand is the gun, and in her right hand is an ankus, or a hook and blade she will use to direct the elephant on which she rides.

Borin did not explain why the border needed to be protected, but said it was not unusual for Karnei Devi to bring a gun. According to legend, there are several angels which take turns coming down to Earth each year.

“It is normal whenever it’s Karnei Devi,” Borin said.

In particular, in 2011, for the year of the rabbit, the angel also brought a gun in her left hand.

“More than that, before 2011 this has also happened once,” he said.

He noted that last year’s angel held a syringe in her right hand, and “we can see how many tons of needles they used for vaccinations.”

“These prophecies are not written or drawn by new-age astrologers — it’s a practice since ancient times,” Borin said.

Divining the portrait of each year’s angel each year was the prashna, or inquiry, of Cambodian astrology, he explained.

Some have asked when the ancient method of Khmer New Year prophecy began to include modern implements like a gun, Borin added.

“Upon the invention of the gun — it started from that day,” he said.

Borin has previously said that his predictions draw on knowledge from many cultures and mathematical analysis.

This year, welcoming ceremonies for the angel will take place at 10 a.m. on Thursday, or Moha Sangkran, the first day of the new year.

To receive the angels according to ancient tradition, people must prepare a display of ceremonial banana-leaf cones in front of the house — two with three levels of banana-leaf sticks, two with five levels, two with seven, and another two with nine.

The almanac describes further offerings that are needed: a pair of golden pacham paper cones, a pair of sla dharma coconut incense decorations, two bottles of perfume, five candles, five incense sticks, five leach cakes, five flowers on a pedestal, two types of bananas — nuon and namwa — on a pair of pedestals, 11 types of fruits on 11 pedestals, a pair of coconuts and two cups of clean water.

When it’s time for the angel to come, the family must gather and worship her by giving up all the negative thinking and being pure in heart. That requires letting go of the resentment and jealousy that accumulated during the old year. If they do that, the angel will bless people with luck and prosperity in everything from this new year onward, the almanac says.

People will be living well in the new year, but a lot of people are not very honest, it adds. These people are only good on the outside but deep down they’re not, and harbor many lies and deceptions.

According to the almanac’s prophecies, the water of the unspecified lake will be very big, bigger than any year. Though there is no danger, there will be a lot of rain at the beginning and end of the year. There will be four eclipses, two solar and two lunar.

In the agricultural realm, lowland rice farming is predicted to be good, but upland rice not so much. Farms will be able to harvest only one part of their crops, with the other part damaged.

The people will have some happiness, some misery — “it is equal,” the book says.