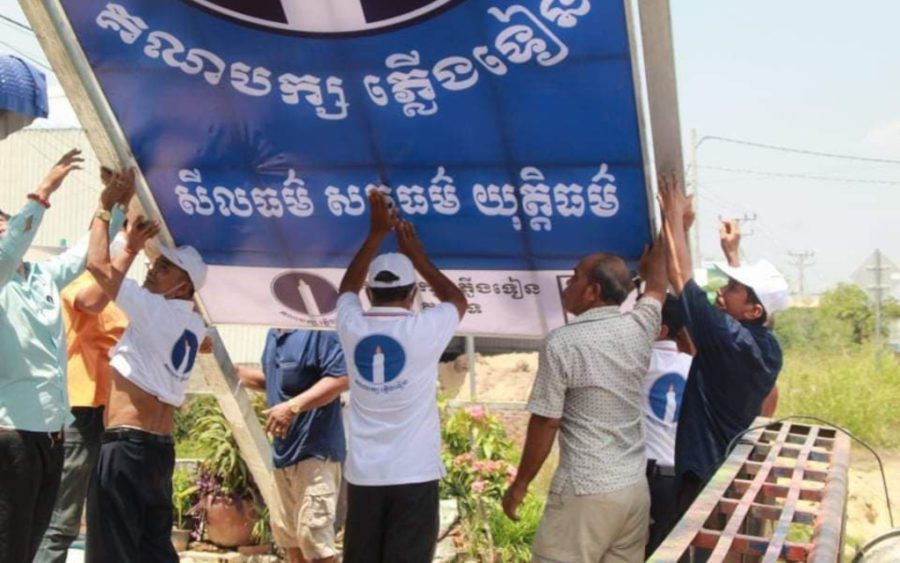 Two Candlelight Party commune election candidates have been arrested in Pursat province, as the party argued it was a political threat and not a case of forged documents as alleged by local authorities.

“This is a threat because the persuasion was not successful since they refused to surrender to the ruling party and that is why this arrest has taken place,” Setha said.

Pursat Provincial Court spokesperson Phann Sokunthorng said on Monday that Savarin had been charged with forgery and sent to pretrial detention, but didn’t have information about Chhoeun.

In another dispute, the party accused a Siem Reap commune chief of preventing them from erecting banners, with the officials claiming it was a misunderstanding and not an attempt to obstruct the party.

Sok Kimseng, a Candlelight Party official, said they were blocked from erecting a party billboard along a public road in Kralanh commune, Siem Reap. Kralanh commune chief Do Voeur acknowledged that there was a misunderstanding that had been resolved and denied trying to obstruct the opposition party’s activities.

“I’m not narrow-minded. [They] asked me how to raise it, and I said that if you are already raising it then I don’t know what to do!” Voeur said. “I did not say anything offensive.”

Sam Kuntheamy, executive director of election watchdog Nicfec, said authorities should refrain from restricting the freedoms of the candidates ahead of the commune election.

“In general, they observe three stages: the pre-election stage, the campaign stage and the election day and the counting day. What kind of activities they have been doing and if there is a threat, there is no freedom and no justice as well.”

A Prey Veng Kampucheaniyum Party official alleged that one of their commune candidates was threatened and bribed by local officials to pull out from the upcoming commune election, a claim rejected by the party’s candidate.

Sum Chun, who heads the party in Prey Veng province, said they had requests from candidates to remove names from the official list sent to the NEC after they were intimidated by the commune and village chief.

Local officials would visit the candidates and bribe or threaten them, he alleged.

“I went to their houses and all of the sudden there was a village chief, or a commune chief, they came like that!” he said. “Wherever I go to the house to choose the name, they will contact the person right away.”

However, former party candidate Ith Ean, who was ranked seventh place in the candidate list for Kampong Trabek district’s Kansoam Ak commune, denied being bribed. “No, no one bribed me or anything. It’s my issue and I decided for myself.”