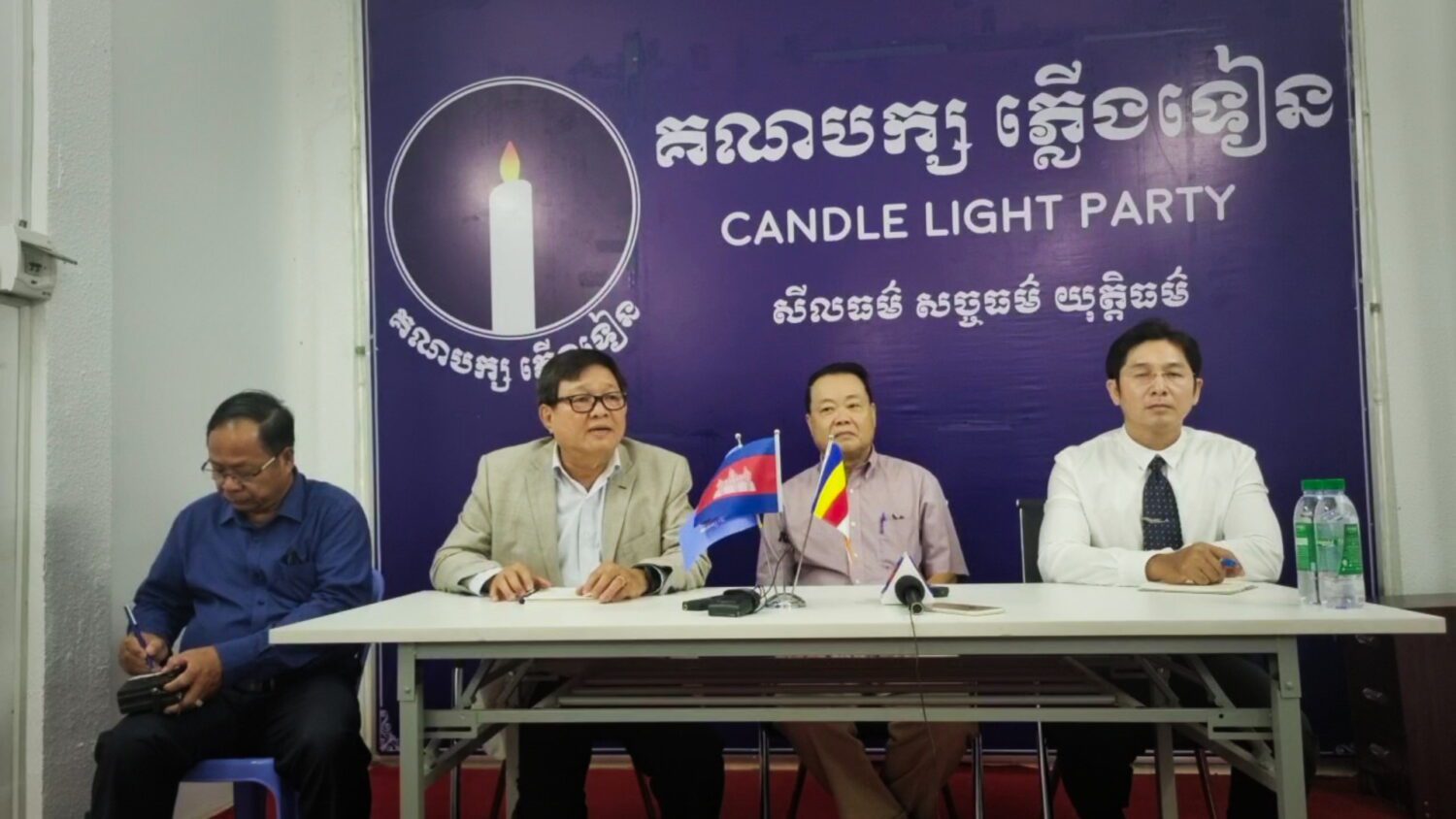 Candlelight Party leaders speak at a press conference on January 17, 2023, after the arrest of party vice president Thach Setha. (VOD)

The Candlelight Party said it wants to negotiate with the government to ensure the release of its vice president Thach Setha, who was arrested in a check bouncing case in which the plaintiff has close ties to the ruling party.

Setha was arrested and sent to pretrial detention on Monday by the Phnom Penh Municipal Court for allegedly issuing checks that allegedly bounced. He is charged under Article 231 of the Law on Negotiable Instruments and Payment Transactions, and could potentially face a maximum sentence of five years if found guilty.

The party held a press conference on Tuesday and was scheduled to conduct a steering committee meeting in the afternoon, which was delayed until Wednesday. Party vice president Son Chhay said they were hopeful they could negotiate with the CPP to get Setha released. He said he would let the public decide if the arrest was a political threat against the party.

“We still think that it is politically motivated rather than related to the personal matter of Thach Setha,” he said, sitting alongside other Candlelight leaders Teav Vannol and Lee Sereyrayuth.

He added that Candlelight was trying to follow all relevant laws to ensure that there was a positive political environment in the country. He then narrated a recent meeting between Setha and Hun Manet, the prime minister’s son, where the Candlelight vice president said he was impressed with the CPP scion and expected the two parties could open a channel of communication going forward.

Hours prior to Setha’s arrest on Monday, Candlelight issued a statement saying they would  have to consider whether to contest the next election if the intimidation of party leaders persisted.

On Tuesday, Chhay said two or three leaders of the party would not make this decision and that they would have to see if the situation was tolerable enough to contest.

“If it is not possible … and all levels of our leaders agree on what we should do, we will follow that. Everything is dependent on the joint decision of the Candlelight Party,” he said.

CPP spokesperson Sok Eysan denied that Setha’s arrest was due to his political affiliation and that courts were following up on a legal complaint.

Asked about a potential boycott by Candlelight, Eysan said the decision was up to the party.

After the arrest of Setha on Monday, the prosecutor’s office at the Phnom Penh Municipal Court released a statement providing more details about the case. The document said the plaintiff in the case was Rin Chhay Pawn Shop and that a complaint was filed in 2019 after Setha allegedly issued five checks that bounced.

The prosecution decided to investigate the case in 2019 and summoned Setha in February and June 2021, but he failed to show up. Eighteen months later, the investigating judge ordered the arrest of Setha on Monday.

A Fresh News article from 2018 provides more details about the case. It alleges that Setha pawned five pieces of land that purportedly belonged to the Khmer Kampuchea Krom Association, where Setha was president. The loan was for $33,400, it said.

According to the Ministry of Commerce, Rin Chhay Pawn Shop is owned by Hay Vanrin, who has connections to the ruling Cambodian People’s Party. Apart from Rin Chhay Pawn Shop, Vanrin is also the owner of Dynith Commercial, where Dy Sokhey is a director. Sokhey is the daughter of late police chief Hok Lundy and wife of Hun Sen’s son Hun Manith.

Vanrin and his wife, Chhor Hong Chhay, donated $10,000 to the national Covid-19 committee in 2020, according to the Council of Ministers website. The Techo Voluntary Youth Doctor Association, whose deputy chair is Hun Manet’s wife Pich Chanmony, reported a donation of $50,000 from Vanrin and Hong Chhay.

Political analyst Seng Sary, who is in exile overseas, said that while it was understandable that Candlelight would want to boycott the electron, it would likely hurt the party. He said looking at the experiences of 2017 and the 2018 election, the lack of an opposition made the CPP stronger and did not affect them electorally.

He said Candlelight could attract more votes if they remained in the political contest.