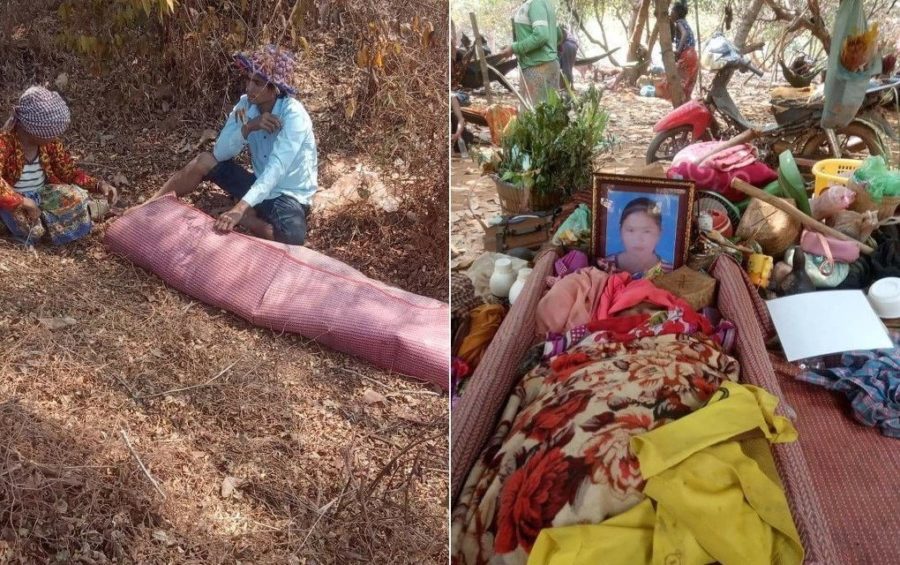 The wrapped body of Kvim Mok, 31 years old and pregnant at the time of her death, lies in Ratanakiri province in February 2021. (Supplied)

Kvim Mok, 31 years old and due to give birth, lay in the Ratanakiri provincial hospital for 21 hours, receiving little care, as her condition deteriorated, her brother says. Then, with her corpse part-way home, an ambulance driver told the family to take her body the rest of the way themselves. Her legs dragged along the road from the back of a motorbike.

The brother, Kvim Vaing, says Mok was due to give birth on February 21 at the Veun Sai district hospital, but as her pain grew she was taken to the provincial capital.

When they arrived around midday, the ethnic Kreung family presented their IDPoor card, which entitles the country’s poorest families to free health care.

“When we showed the IDPoor card, it seemed they didn’t want to take care of her,” Vaing says. “They didn’t check on her or give her any scans.”

Five hours later, a doctor gave her a serum that Vaing could not identify, and did nothing else, the brother says. Mok’s eyes started to turn yellow, he adds.

“Around 2 or 3 a.m., her husband saw her condition wasn’t normal and woke up the doctor. The doctor said she was OK and asked him not to worry, and criticized him: ‘If you know, why don’t you become a doctor?’,” Vaing says.

“Then they gave her two injections, but her condition got worse and worse, and at 6 a.m. sent her to the emergency room, gave her oxygen, then left her without taking care of her. At 9:20 a.m. she passed away.”

The family felt a disparity in the level of attention and care, he says. “We saw other patients [who could pay] being taken care of until morning.”

Vaing says that was not the whole ordeal. The family begged for help to take Mok’s body home, and an ambulance took her to their commune — but stopped at a bridge about half an hour away.

The driver told the family he wasn’t allowed to go further. Vaing says they wondered again if it was because they were poor.

“He dropped the body” on the road, Vaing says. The family put the woman’s corpse on the back of a motorbike and took her home, but her legs dragged through the long ride, he says.

“They didn’t look after my sister,” Vaing says. “If they did surgery, I would be satisfied even if she died. … [But] they delayed.”

“If they did surgery on her when she arrived, she would be OK, but they delayed it until morning,” Pin suggests.

“We are disappointed. They are the health authorities. Why couldn’t they transport her to their home?” he says. “It’s unreasonable. People are saying they don’t want to go to hospital and would rather die in their house in the village … because they’ll dump your body on the road like her.”

Ratanakiri provincial health department director Ung Ratana could not be reached for comment on Thursday.

But in a statement dated Wednesday, the department acknowledged that the ambulance driver had taken Mok’s body out of the vehicle and placed her on the road, but blamed the driver’s individual actions.

Vaing says his sister was buried on February 26. The family wants to file an official complaint, but don’t really know how, he says.

“When you do not have money, they won’t look at you,” Vaing says. “It could be that we are poor so they did not want to bring the body to our home.”