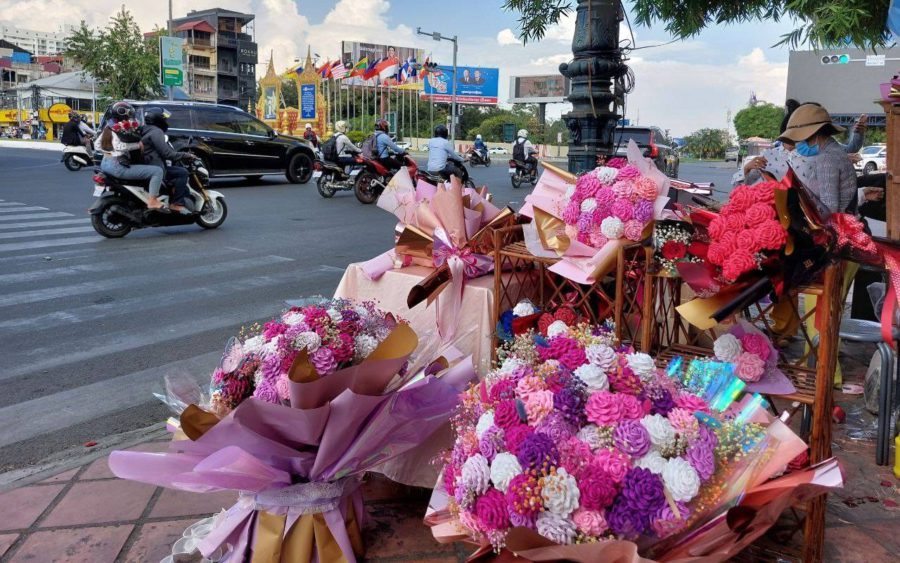 As Valentine’s Day evening arrives, Prak Maly, commune chief of the capital’s affluent Boeng Keng Kang I, is set to make her rounds around the neighborhood’s restaurants.

Flower stalls have been set up on street corners and around main roads. Street sellers are hawking floating balloons in the shape of hearts.

Officials won’t limit the capacity of restaurants. But they’ll remind them of hygiene, checking temperatures and avoiding crowds, Maly said.

“We’ll go to every restaurant around the commune to make sure they are following the measures,” she said.

Valentine’s is already a time that every year causes authorities to fret deeply about the youth, leading to proclamations about morality and restraint.

This year, the day has coincided with a surge in official Omicron cases in Cambodia.

The Health Ministry said around midday that authorities had recorded 512 daily cases — up from 401 the day before, and 300 announced on Saturday.

It has been a fast rise in the past 10 days; until February 5, there had been 97 straight days of fewer than 100 daily cases. Four days later, the daily case count exceeded 200 again.

Long-running labor protests against casino operator NagaWorld were shut down. But otherwise, authorities have made few changes for now, instead urging continued precautions.

Hok Kimcheng, a Health Ministry spokesperson, said a government committee tasked with controlling the spread of the disease would meet on Tuesday, as officials were still gathering information about the situation on the ground.

In the meantime, he urged people to follow precautions.

“Even if the Omiron variant seems to be less severe, it is contagious. So, we have to reduce the spread,” he said.

Maly, the commune chief, said if Omicron spread further in the community, people’s businesses and livelihoods could be affected again.

“Now people are starting to worry about their finances,” she said. “[We need to] make sure we wear masks and follow health’s measures. Our commune is playing loudspeakers around the area.”

Neang Sreymao, 34, sells food in Sen Sok district near the new Ministry of Land Management. She is worried about the recent increase in Covid-19 cases, but after close to two years of having difficulty earning for her family, she has little choice but to continue working.

Things would get dire for her family, she said, if the government imposed lockdowns.

“If we go back into lockdown, it will be hard for me. As I live in a rented house, I have to pay for rent. So, I have to earn,” she said.

The government has given little indication it will again enforce lockdowns, which disproportionately impacted the poor and led to widespread calls for food support and other aid.

While Hun Sen last week called for reduction in attendance at weddings, religious events and celebrations, the national government and Phnom Penh City Hall have not issued any new Covid-19 safety guidelines. A Heath Ministry statement from Sunday only had instructions on home treatment for the disease.

City Hall and the Education Ministry last week issued warnings banning students from celebrating Valentine’s Day on Monday, suggesting they would stoke the spread of the virus. The government annually publishes such warnings ahead of February 14, even as the event continues to grow in popularity.

Deputy Phnom Penh governor Keut Chhe said many measures and restrictions had been issued already but would not point to any specific announcements. The only one he pointed to was the Valentine’s Day directive and another one on inspection of restaurants.

“Having a surge of Omicron is anticipated due to the nature of the virus,” Ailan said, noting the variant’s transmissibility.

But measures were already available to reduce its spread, she said.

“We need to get fully vaccinated when it’s our turn, wear our masks, maintain physical distance, practice hand and respiratory hygiene and avoid enclosed spaces.”

Ailan said it was critical to avoid a “red line” where the health care system becomes overwhelmed with cases. Home-based recovery for people who are asymptomatic or only have mild symptoms was appropriate, she said.

“I encourage everyone to be cautious,” she said. “We can meet our friends and family, we can continue to work and go to school, but we must remember our COVID-19 precautions so that we can maintain the Cambodia reopening safely and sustainably.”

Heng Lida, a 27-year-old flower seller, said Valentine’s Day was a big day for her financially, and she couldn’t sell at all last year. Authorities had restricted some sellers around Sihanouk Blvd. on Monday, she said.

She worried about Covid-19, but hoped people would be out in the evening.

“The flowers are more expensive. People might complain. They don’t really have many choices to choose from. But the infection is increasing. I am happy and worried,” she said.

Updated on Tuesday with comments from the WHO’s Li Ailan.