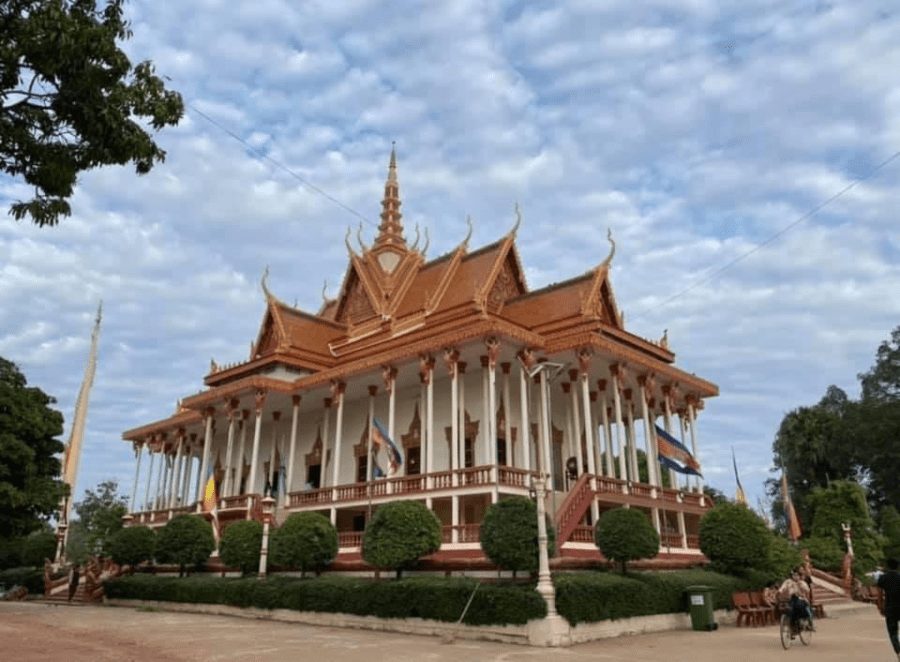 The “100-Column” pagoda in Kratie province’s Sambor district, in a photo taken from the Kratie provincial monk council Facebook page.

A controversial chief monk is accused of racking up $220,000 in debt for constructions while destroying ancient property at a famous Kratie pagoda, and his reappointment on Monday caused leading monks in the province to issue a letter threatening to resign.

But Phalla resumed his position as head of the pagoda at a blessing ceremony on Monday, following a decision made by Nget on January 8. In a letter explaining the decision, Nget said Phalla must report all income and expenses to the national chief monk committee every three months.

Khim Sorn, chief of the Mahanikaya sect’s secretariat, said the reappointment was related to a creditor’s demands.

Initially, the creditor, Chea Dara, filed a complaint to have Phalla removed because the pagoda failed to pay its debts. But a new chief monk and committee also did not honor the debts, so the creditor asked for Phalla’s reinstatement to take responsibility and pay back the money, Sorn said.

The creditor, Dara, told VOD that his role in this dispute was now over, as the case had been handed over to the national chief monk.

“The chief monk has made a compromise already. I have nothing more to comment about it,” he said. “It is finished. He is responsible.”

Dara would not directly answer if he had already received his money, or from whom.

Sambor commune chief Chum Savorn said Phalla also faced complaints from local people, who objected to him filling up an ancient pond for the construction. But Phalla continued to destroy the pond and other buildings around the pagoda, Savorn said.

The construction started in late 2017 but had stalled half-finished, Savorn said. He said Phalla was wrong to destroy the pagoda’s heritage and mismanage its money.

“If he is found to be against the law, they should punish him by law,” Savorn said. “There are plenty of monks who have the ability” to replace him.

“This is not a solution based on wisdom,” he said.

The provincial monk committee issued a letter ahead of Monday’s blessing ceremony objecting to Phalla’s reinstatement.

“If there is no fair solution accepted by the local authorities, Sambor district’s CPP-strengthening working group and the people in Kratie province, we will all resign from positions as monk officials [in order] based on hierarchy,” said the letter, signed by provincial chief monk Tep Hatha.

Sor Mon, a former lay priest at the pagoda, said about 70 people had gathered outside the pagoda on Sunday to protest.

“People are opposed to the return of Eng Phalla,” Mon said.

The ancient pond destroyed by Phalla traced back to 1529, while trees were felled and an old hall storing historical artwork was also torn down, he said.

Dourn Sidorn, spokesperson for the provincial chief monk committee, said the new pagoda committee had repaid 30 million riel (about $7,500) of the $220,000 debt before Phalla’s reappointment, but the creditor did not agree to a two-year repayment plan and demanded Phalla’s return instead.

The reappointment “does seem not to have enough transparency yet,” Sidorn said.

Sou Se, director of the provincial administration’s religion and cults department, said people had not donated as much money as usual for the annual Kathin ceremony offering gratitude for monks on October 26, so the pagoda did not have money to pay its creditor.

“[The creditor] felt hopeless and distrustful, and he contacted the national chief monk committee to ask for the return of venerable Eng Phalla in order to earn money and pay him,” he said.

Commune police chief Ngim Sok said there had been mistakes on both sides about the allocation of money.

“If we clap with one hand, it will not make a sound. Both sides have little mistakes,” Sok said. “If there is an understanding, the issue will not become prolonged.”

According to the letter announcing Phalla’s reinstatement, the 100-Column pagoda will remain under the national committee’s management, returning to the provincial committee only after the pagoda’s operations are stable.