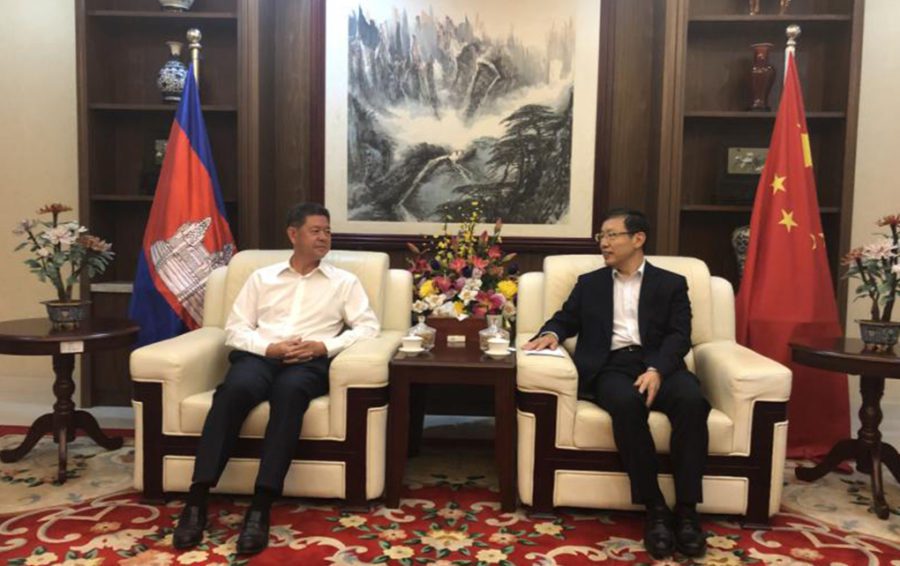 China’s ambassador to Cambodia and the governor of Preah Sihanouk province agreed last week to open a Chinese consulate in the province amid a boom in Chinese investment and ballooning population.

Ambassador Wang Wentian met provincial governor Kuoch Chamroeun on Wednesday at the Chinese Embassy in Phnom Penh to discuss bilateral economic cooperation at the provincial level, according to a post on the embassy’s Facebook page on Friday.

Chamroeun took up the governor’s post in June after former governor Yun Min resigned — and was later made a secretary of state at the Defense Ministry — following the collapse of a Chinese-owned building that killed 28 people. The seven-story building was under construction at the time it fell.

Provincial government spokesman Kheang Phearum said Chamroeun had requested the meeting to ask for the embassy’s cooperation in handling some challenges, including ensuring public security and combating money laundering and cybercrimes.

Phearum said the two sides had agreed on a plan to create a Chinese consulate and an information center in the province.

“The Chinese ambassador supported the opening of a Chinese consulate and information center to broadcast [information] and to cooperate with the provincial administration to provide information to Chinese people and investors working in Preah Sihanouk and to solve the problems that are happening,” Phearum said.

The embassy did not say when the consulate or center would be opened.

Ky Sereyvuth, director of the Royal Academy of Cambodia’s Center for China Studies, told VOD that the meeting between Wang and Chamroeun followed the rise in the number of Chinese nationals living and starting businesses in the province.

The ambassador may have wanted to meet the governor face to face as they will need to work with each other a lot more, starting with political and economic cooperation, Sereyvuth said.

“There are more people living [in the province] and generally, they want their [Chinese] nationals to be protected,” he added.

Investors, regardless of nationality, have the same rights under Cambodia’s law, and what was important was how effectively the law was enforced by officials, Sereyvuth said.

An Interior Ministry report from September said 210,000 Chinese nationals were living in Cambodia, with 78,000 of them in Preah Sihanouk.

Earlier this month the provincial police chief claimed the majority of businesses in Preah Sihanouk were now Chinese-run.

The province currently only has a Vietnamese consulate.