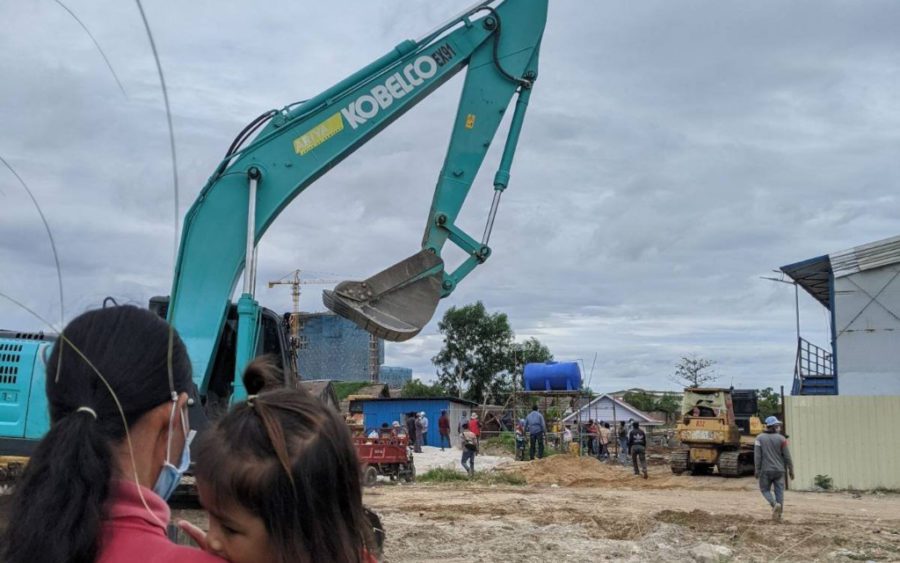 Local authorities, accompanied by security forces, started clearing land in Chroy Changva district’s Prek Leap commune without any notice on Thursday, affecting one resident’s fencing and fish pond, near a satellite city being developed by the Overseas Cambodia Investment Corporation.

Two excavators started clearing land belonging to Kim Chhay, the owner of a restaurant on the peninsula, destroying a fence and fish pond on his premises, Chhay said on Thursday. The demolition took place under the watch of mixed security forces and is near OCIC’s “Chroy Changva City” development.

“This is threatening. Around 50 to 60 police forces and workers and more than 100 people just came to my land,” Chhay said. “I suggest that in this society, in this current situation, we can negotiate to not do that. No one wants to fight with the authorities.”

Chhay said 2 hectares of his land had been cleared without any warning, and was probably worth around $2 million. He said if the company and authorities wanted to use his land they should adequately compensate him.

“I don’t know what kind of policy this is? I think, why not just solve all of it at once? Sending three to four excavators and fire trucks here; I don’t understand what’s in their mind?”

Sem Darith, who is the director for Chroy Changva’s district administrative office, declined to comment on the land clearing and only said the authorities were following orders from senior officials.

He said, “Contact the governor. I cannot answer this; this is an order for our work.”

Phnom Penh governor Khuong Sreng and City Hall spokesperson Met Measpheakdey could not be reached on Thursday. OCIC did not respond to requests for comment.

OCIC is building a multimillion-dollar development project in Chroy Changva and has been embroiled in land disputes with some residents of the peninsula, who say the company and government have failed to provide them fair compensation. City Hall in 2016 decided that 10 percent of land for the project will remain with the residents, 40 percent will be given to OCIC and the rest will be with the municipality. Residents have rejected this offer.

OCIC was also recently awarded contracts to develop Koh Norea, an artificial island development similar to Koh Pich, and construction of a new airport for Phnom Penh in nearby Kandal province, which is also mired in land disputes.

Vann Sophat, a project coordinator at the Cambodian Center for Human Rights, said authorities almost always sided with corporations or wealthy and influential individuals rather than attempting to solve problems raised by citizens.

“This is a shame. Law enforcement officials should treat [everyone] equally.  We can see the unfairness against the people,” Sophat said.

Doeun Don, who works at a local resort, was observing the demolition of Chhay’s property on Thursday, and said it was a cruel and unacceptable act to destroy someone’s property without any warning.