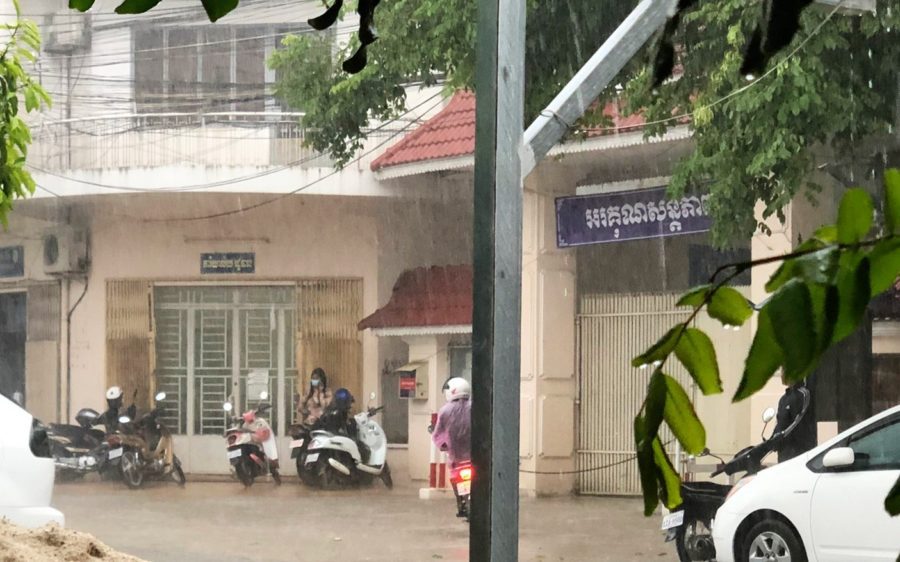 A citizen journalist was detained on Monday and later released after filming a police station and preparing to interview family members of 30 Kandal villagers arrested in a land dispute over Phnom Penh’s new international airport.

Chray Nim, who is also a land activist, said she was working as a citizen journalist for the community, though she would not elaborate on where she publishes her reports.

The airport development, in Kandal province’s Kandal Stung district, has in recent months become more aggressive about clearing the land of villagers, who are refusing the compensation on offer to relocate.

Villagers have tried to block roads in protest, while police and military police have increased their presence to stop them.

On Sunday, a confrontation between villagers and authorities turned violent, with villagers allegedly hurling rocks at officers before 30 were arrested.

Amid a downpour outside the Kandal Provincial Court on Monday afternoon, a man said he was there with his wife because their 22-year-old daughter, a garment factory worker, was arrested on Sunday. He added that “I will be arrested” if he was named in publication.

“I couldn’t sleep. I wanted to burst out crying,” the man said of the night after his daughter’s arrest. “It’s our land and we’ve been jailed for our land.”

The villagers were angry, he said. But he said he was also annoyed at the children who had hurled rocks at officers. “They couldn’t control their emotions,” he said. “The young were aggressive, and the older people got arrested.”

Two women said they had come from Phnom Penh after their 55-year-old mother was arrested. “I was very upset when I learned that she was arrested, and they prevented us from seeing her,” one of the women said, declining to be named. The two had been outside the police station since 7 a.m., she said.

Another woman said her mother, who was over 60 years old, was also arrested. “I don’t want to talk much because I don’t want to get in trouble,” she said, standing with a full bag of cooked rice and other food she hoped she could give to her mother.

The first man added, speaking to reporters: “I’m worried about you too.”

Chray Nim, 41, was arrested around 11 a.m. outside the police station, according to her daughter Reaksa Reasey. Reasey said she had come with her mother, and saw six officers drag her into the compound.

Nim was filming the police station’s gate as a citizen journalist, Reasey said.

Reasey was also questioned for an hour before being released, she said.

“They questioned where my mother came from and what she does. I told them that I don’t know because I’m just a student,” Reasey said. “I was very, very scared seeing her in handcuffs.”

In the afternoon, a guard at the police station also told VOD: “No pictures. If you continue to take them, I’ll get someone to take you.”

Nim was released in the evening. Nim told VOD after her release that she had only started filming, had not interviewed anyone yet, and had not broadcast live. She was questioned about who she worked for and whether she had sought permission to film. She would only say that she was a “community citizen journalist” and not where her reports were published.

“They asked whether I had asked permission from them or not and I told them that I go to take videos everywhere and I have never asked permission,” she said. “Anywhere people protest we go to cover it.”

“This is a threat and silences the freedoms and rights of independent citizen journalists,” Nim added.

Information Ministry broadcasting director Phos Sovan said he did not have clear information yet about Monday’s detention, and whether it was only for taking video.

“When we write a narrative, it can be too far from the truth, and sometimes the authorities think that it will incite or cause more violence … so they use their mechanism toward journalists who broadcast live,” Sovan said.

Many small news outlets have appeared on Facebook in recent years — and several have faced trouble with the law over their video broadcasts.

Nim began as a land and women’s rights activist in 2012 after facing problems with her own land near the current Phnom Penh International Airport, according to the Cambodian Center for Human Rights and Transparency International.

Kandal officials have been heavy-handed in dealing with journalists covering the dispute. A VOD reporter was followed by two undercover police officers back to Phnom Penh after covering the story and another social media broadcaster was threatened and asked to stop covering the protest.

Nop Vy, executive director of the Cambodian Journalists Alliance, said Nim was a member of the association, though she had never done work for it.

The association would be offering her support as a member, he said.

“Citizens who can produce stories like articles and videos and photos are called citizen journalists. We have been working to build their capacity and ethics,” Vy added. “Some citizen journalists have good knowledge and can write stories. We encourage them and we can sign contracts with them.”

Many journalists in Cambodia were not formally trained, but have gained experience through working in newsrooms and with other journalists. “It is the same for citizen journalists. They are normal people, but they start working as journalists, then they learn and improve to be professional journalists,” he said.

Vy added that based on information he had, Nim had only been taking video. “I think this is part of people’s freedoms, including journalists’ freedoms,” he said, adding that authorities should respect those freedoms. “They have no weapons. They only have smartphones to interview and take photos and videos.”

Sokunthea Chhan, media development director at the Cambodian Center for Independent Media — VOD’s parent organization — said Nim was not a citizen journalist for CCIM. But CCIM would be providing a lawyer to support her, Chhan said.

CCIM, however, did have citizen journalists in the disputed airport area, and they were facing threats from police and local authorities, she said.

“CCIM supports CJs and professional journalists when they face challenges by providing legal support and safe houses if they need,” she said. “CJs are just gathering [information about] issues happening at the conflict area. The authorities should open the space for CJs and all journalists to exercise their rights freely.”

Kandal provincial police chief Chhoeun Sochet could not be reached. Pung Khiev Se, chairman of OCIC, which is developing the airport in a joint venture with the civil aviation authority, has not responded to questions.

Primary Schools, Universities to Reopen Nationwide From Next Month