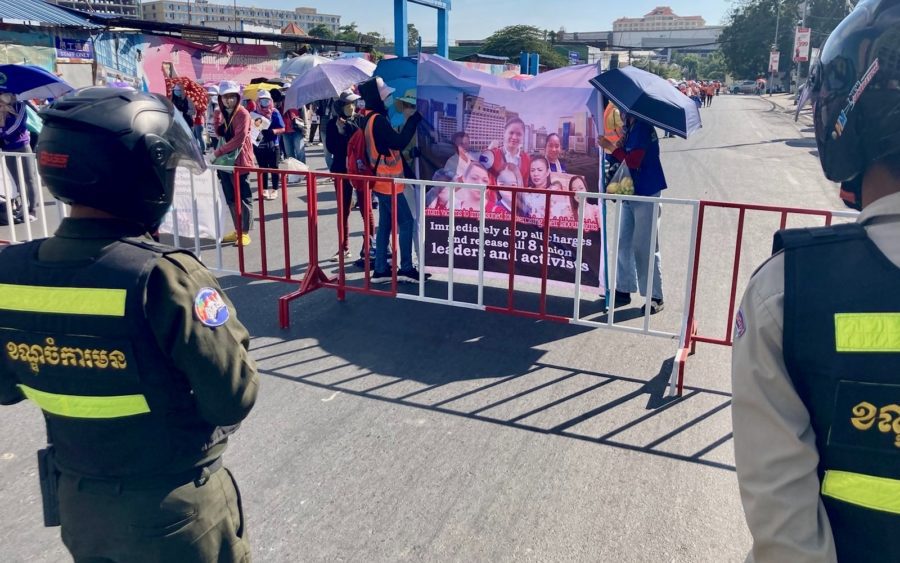 Phnom Penh City Hall said Tuesday NagaWorld workers had to move their protest to the outskirts of the city, despite allowing them to protest on National Assembly road near the casino for close to two months. (Ananth Baliga/VOD)

NagaWorld protesters are not permitted to rally in public spaces, City Hall said on Tuesday, urging them to gather at a park in the city’s outskirts when workers clear Covid-19 testing and quarantine requirements.

The casino workers’ protests, which began on December 18, came to a halt this month when the Health Ministry ordered they all test for Covid-19 and stay at home. The protesters are about to finish the mandated self-isolation period, to be followed by more Covid-19 tests.

City Hall issued a statement Tuesday saying the NagaWorld protests were banned in public places, and protesters should continue their rallies at Freedom Park if they don’t have Covid-19 symptoms.

Freedom Park, once an epicenter of rallies in the capital, was moved from its original location near the Night Market to the city’s outskirts in Russei Keo district.

Protester Kim Sokha said she was sad to see the City Hall statement, which she believed was biased in favor of NagaCorp.

“I don’t know about other workers, but for myself, I will not go to Freedom Park. The strike was supposed to be near Naga. I will stand there. I’m ready for anything. If they arrest me, I’m not scared. Freedom Park is far. If we strike two or three years, we will still not have gotten a solution,” Sokha said.

“Since my workplace was Naga, I demanded that it should be the only place where the workers stand,” she added. “This is more pressure for me and the other strikers. City Hall does not see that we are in difficulty.”

Meach Sreyaun, another worker, said the protesters had held an online meeting on Tuesday, and they would discuss plans again after resuming testing tomorrow and Thursday.

“We are worried. Why don’t the authorities help us? Find a good solution. But they try to separate strikers. How powerful is Naga?” she said.

“Maybe the NagaWorld company is sleeping. If they are still not awake, we should wake them up in front of Naga.”

The Health Ministry announced 184 new Covid-19 cases on Tuesday, a dropoff after a surge to more than 500 daily cases announced on Monday.

In a statement, Human Rights Watch said it was concerned that Covid-19 was being used to justify a crackdown, pointing to three NagaWorld protesters arrested and charged under the Covid-19 Law.

“The Cambodian authorities are stooping to new lows by bringing criminal charges in the guise of public health measures to end a strike,” said Phil Robertson, deputy Asia director at Human Rights Watch. “The government’s persecution of union activists appears aimed at blunting the growing unity and strength of Cambodia’s union movement and their support for the NagaWorld strikers.”

Around 40 NagaWorld workers tested positive during three days of testing earlier this month. They were sent to treatment centers, while the rest of the workers were told to stay at home for 10 days.

The protests revolve around mass layoffs last year that workers say targeted union leaders and members. Eleven protesters are now in pre-trial detention: eight are facing incitement charges and three were jailed for obstruction of the Covid-19 law.