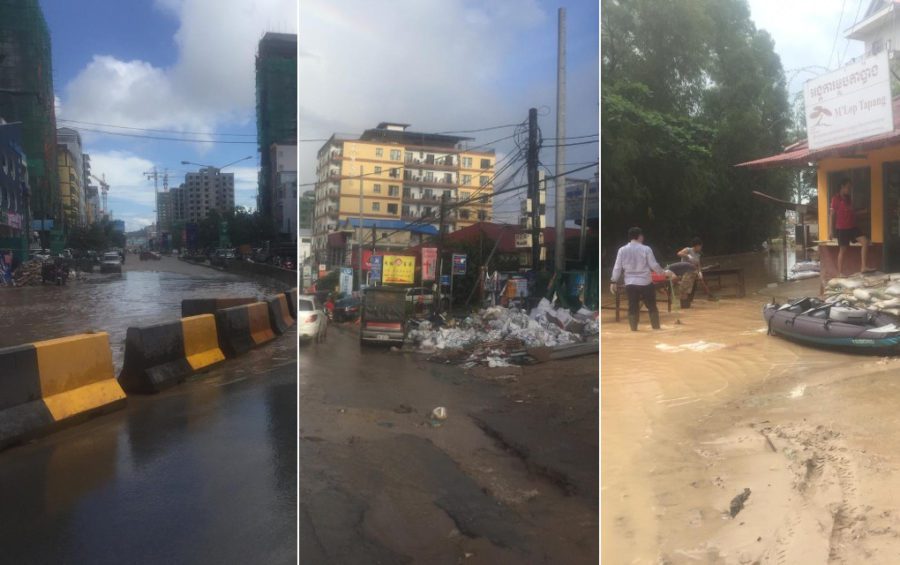 The aftermath of flooding in Sihanoukville, August 15, 2019. (Kong Meta)

SIHANOUKVILLE — Him Mao moved into his new house in the seaside city of Sihanoukville just a day before water flooded in. Mao, his wife and their son were sleeping when they heard a yell just before midnight from the builders staying downstairs. Water was streaming into their newly constructed home.

“I’m new to the area in this village. We just bought the land, but when we talked with our neighbors they told us that this area had never flooded before,” said Mao, a 56-year-old fishmonger living in Buon commune.

Floodwaters, which soaked Preah Sihanouk’s provincial capital earlier this month, reached Mao’s home on August 9 — despite the house being built a meter off the ground. The damage would cost him about $4,000, he said.

“Many houses in our village were flooded too,” Mao told VOD. “We could not manage to collect our things. Our car and motorbike are very wet and damaged. We have to get them fixed.”

The flooding followed heavy rain and was worsened by “too much waste” clogging sewers and people filling in waterways with land, Mao speculated.

“The rubbish is everywhere around town,” he said.

Sihanoukville streets, shops and offices were left underwater, and three people were killed in the province during the flooding when walls collapsed on them.

Speaking to VOD, officials acknowledged sewers and waterways obstructed by trash, and lakes and wetlands filled in for development contributed to what some called the worst flooding in the province’s history.

Authorities pointed fingers at unscrupulous individuals who blocked drainage systems by littering and those who filled in waterways to reclaim land and build on it.

“The plastic rubbish caused the water not to flow,” he said earlier this month.

After the heavy rain and flooding, authorities began clearing waste and soil from canals and streams to make way for excess water, according to Phearum.

“The waste problem cannot only be blamed on the [sanitation] company,” he added. “People who litter also contribute to the problem.”

Preah Sihanouk governor Kuch Chamroeun told reporters on Friday that more than 200 people were found to have illegally filled in streams or lakes, and 11 families who had occupied land near bodies of water had agreed to relocate.

“Some land that was filled could be private land for development. We cannot ban them,” Chamroeun said, claiming that authorities could not stop landowners from filling in waterways running through their private property.

However, others were filling in streams and lakes on land that was not their own. “Some people filled streams or lakes illegally and cleared them, which made the waterways very clogged and caused flooding,” the governor said.

In a 24-hour period in early August, 270 millimeters of rain fell, the heaviest seen in the area for 30 years by almost double, Chan Yutha, spokesman for the Water Resources Ministry, told VOD earlier this month.

The heavy rainfall left Sihanoukville inundated. In the last few years, the city has also been flooded by new local residents and Chinese tourists, as well as rapidly rising hotels and casinos that cater to Chinese gamblers.

The number of new construction projects in Preah Sihanouk has increased rapidly, with 40 new projects approved in the first three months of this year compared to fewer than 50 new projects in total from 2005 to 2016, according to provincial government data cited by New Naratif.

Last year, more than 2 million Chinese tourists entered Cambodia, up from 1.2 million in 2017, according to Tourism Ministry data.

In addition, the province’s Cambodian population more than doubled from 2017 to this year to about 220,000 people, said Phearum, the provincial spokesman.

The government has established Preah Sihanouk as an economic development role model for the nation, with aims to attract investment, which has mostly come from China, he said.

“We don’t target Chinese but mainly the investment is from Chinese who invest in construction, hotels and casinos,” Phearum said.

“Our vision is to fulfil the government policy, and we have to achieve it successfully,” he added.

“It’s like in other places in the world. When you bring development there are always issues, but we have been working on it and we have not stopped,” he said.

Public Works and Transport Ministry spokesman Vasim Sorya on Wednesday said a new, modern sewage system could help address flooding problems in Sihanoukville and ensure a rising amount of wastewater did not flow directly into the sea.

“But the upgraded drainage system in Sihanoukville to deal with flooding needs a lot of money and it needs a lot of investment and time,” Sorya said.

Still, Minister of Public Works Sun Chanthol on Friday said there was no time to waste.

The sewers and drainage network in the provincial capital could no longer accommodate the amount of wastewater produced by the city’s growing number of inhabitants, Chanthol said during a consultative meeting in Phnom Penh to discuss sewage system development for Sihanoukville.

But its treatment capacity was still inadequate.

“Some wastewater goes directly into the sea without being treated so we urgently need another facility,” Chanthol said during the meeting.

“If we don’t act quickly, we cannot maintain our beach, sea, environment and sand,” the minister said.

The government was also considering a plan to charge users by household or business for wastewater treatment in order to pay for the facility’s operations, Chanthol told reporters after the meeting.

Authorities had collected truck fulls of rubbish thrown into canals and streams, but waste problems needed to be addressed by all parties, said Samuth Sothearith, the provincial environment department director.

Phearum, the provincial spokesman, said about 100 city sanitation workers collect 600 to 700 tons of trash in Sihanoukville each day, but it wasn’t enough if people continued to dump their rubbish wherever they pleased.

“No matter how many workers we have [it won’t matter] because people don’t know how to take care of their waste,” Phearum said.

Heng Peng Hak, a manager at Kampong Som Waste Management, which has managed Sihanoukville’s sanitation since 2017, agreed that the number of sanitation workers was less of a problem than the littering public.

“The rubbish that clogged the streams and drainage was not because we did not do our jobs but because people filled in the streams or threw their waste in the canals,” Peng Hak said.

“They are very selfish. They only want it to be clean at their house. And people also have to minimize their waste,” he added.

The company currently had 78 trucks to transport trash to landfills and planned to order 100 more, although Peng Hak did not say when the company would get the new vehicles.

Still, more trucks would not resolve another issue, also cited by locals.

“The traffic is very bad so we cannot move our trucks. The waste keeps increasing and we can only do it when there are better roads, otherwise it’s always late,” Peng Hak said.

According to Phearum, the provincial government spokesman, some 1,700 families were affected by the flooding, with 59 cars, 158 motorbikes and 55 generators damaged. Streets, shops and local organizations were also drenched.

One local NGO, M’Lop Tapang, which provides social services to about 5,000 poor children in Sihanoukville, had to shut down for about 10 days this month due to the flooding, said the organization’s co-director Maggie Eno.

While computers were placed high off the ground to avoid potential damage, fast-rising flash flooding in the middle of the night left the NGO’s dental clinic chairs and other medical equipment, children’s medical records, medicine and other supplies saturated and ruined, Eno said.

“When we closed thousands of children didn’t get the services they need,” she said, including about 400 children who study at M’Lop Tapang.

The government was working hard with excavators to remove garbage from canals, but this was a short-term solution, according to Eno.

“The rubbish will block the water; then it will come again,” she said.

If the drainage system were not improved before the next rainy season, Eno said parts of Sihanoukville would be unlivable.

“The infrastructure is not ready for it. There has been a huge impact to the community we work with,” she said.

Phearum, the government spokesman, said the Public Works and Transport Ministry planned to repair 22 roads damaged by the floods and large trucks in Sihanoukville.

Plus, he predicted, in the next two years, there would be no more land in Sihanoukville for construction.

“There will be no more big trucks on the road so the roads could be better without any damage,” he said.

But roads and the sewer system were not the only factors contributing to the damaging floods.

They were also exacerbated by flood plains being filled in for private development, Phearum said.

“The flood plains are getting smaller but we cannot ban [the construction there] because it’s their private land. Its farmland which could store water when there is rain,” he said.

When asked about Preah Sihanouk’s public lakes also being filled in for private development purposes, the spokesman acknowledged the connection to the flooding but declined to elaborate.

“Lakes were also filled for development and were also a cause [of the flooding] but I don’t want to comment so that you don’t link it to something else,” he said.

As of Wednesday, the provincial government had not ascertained the total costs of flooding cleanup and rescue efforts, he said.

Him Mao, the fishmonger whose home was flooded the day after he moved in, said he wants the authorities to remain active and excavate the area when there’s flooding.

He still worries about how he will protect his property from flood damage everytime it rains.

“We have to be ready,” Mao said. “We have to keep things off the ground and always stay ready.”