CNRP Calls for Cambodians to Unite Behind Them 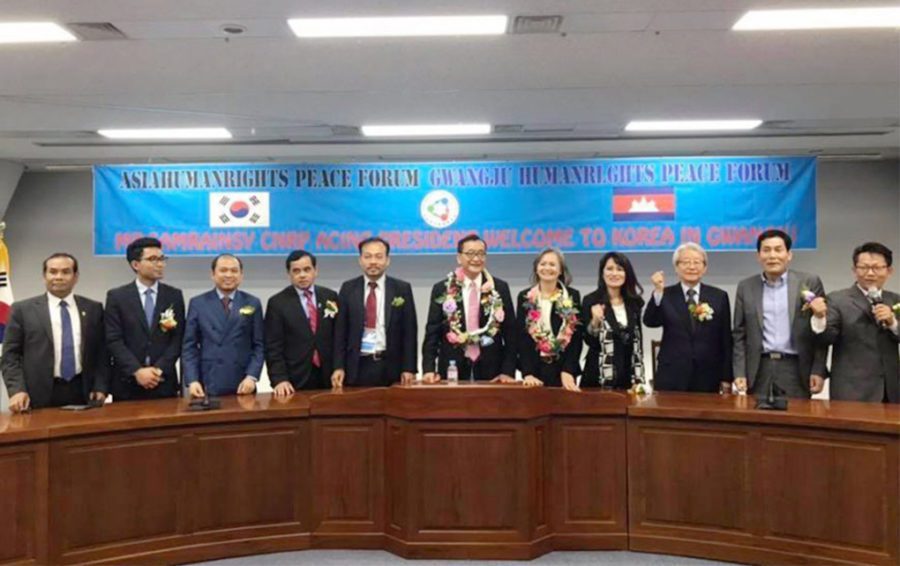 A group of a special “Congress of Democrats” held from April 19 to 21 in the South Korean city of Gwangju. (Photo/FB)

Exiled leaders of the banned opposition Cambodia National Rescue Party (CNRP) have called on all Cambodians to join their efforts to “restore democracy” and for the government to defer to appeals by the international community for change.

At a special “Congress of Democrats” held from April 19 to 21 in the South Korean city of Gwangju, opposition party officials led by their “acting leader” Sam Rainsy appealed for a broad base of support for the their campaign for re-legalization.

In a statement, they called on Cambodia’s “political parties, armed forces, civil servants, [and] civil society groups” to “actively participate in restoring democracy in Cambodia and to promote a full and accurate democracy in accordance with the Constitution and spirit of the October 23, 1991, Paris Peace Agreement.”

It also urged Prime Minister Hun Sen to negotiate with the E.U. to find “a political solution” that avoids economic sanctions threatened against Cambodia.

The CNRP was forcibly dissolved by the Supreme Court in November 2017 with 118 of its officials banned from politics for five years and its leader, Kem Sokha, detained for “treason.” Prime Minister Hun Sen’s long-ruling Cambodian People’s Party’s (CPP) then won 125 out of 125 seats the the July 2018 national election.

Both the E.U. and the U.S. have threatened Cambodia’s preferential trade access to their large markets, which buy almost two thirds of the country’s exports each year, unless Hun Sen’s government rectifies rights abuses and repression.

Mu Sochua, a vice president of CNRP who now lives abroad and was last month ordered arrested by the government, told VOD that she would pass the resolution to the E.U., U.S. and other world governments pressing for change in Cambodia.

She described the congress as a step forward in the restoration of democracy.

“We have to base [government] on real democracy, meaning that all the relevant parties must participate in restoring democracy and promoting freedom,” Sochua said. “We will pass on these results to the international community today.”

However, CPP spokesman Sok Eysan said that he considered the CNRP’s appeals to be hackneyed and “useless.” He said the CPP government has always properly followed the Constitution and the 1991 Paris Peace Agreement.

“It is the same old thing. It is not necessary to make comments,” Eysan said.

“For the Paris Peace Agreement, we have properly followed that agreement. We have held elections. So there is no wrongdoing. The only wrongdoing is with a few people who have escape the country,” he said. “There will be no negotiations”

“It is only the one who has already lost who wants to negotiate,” he added.