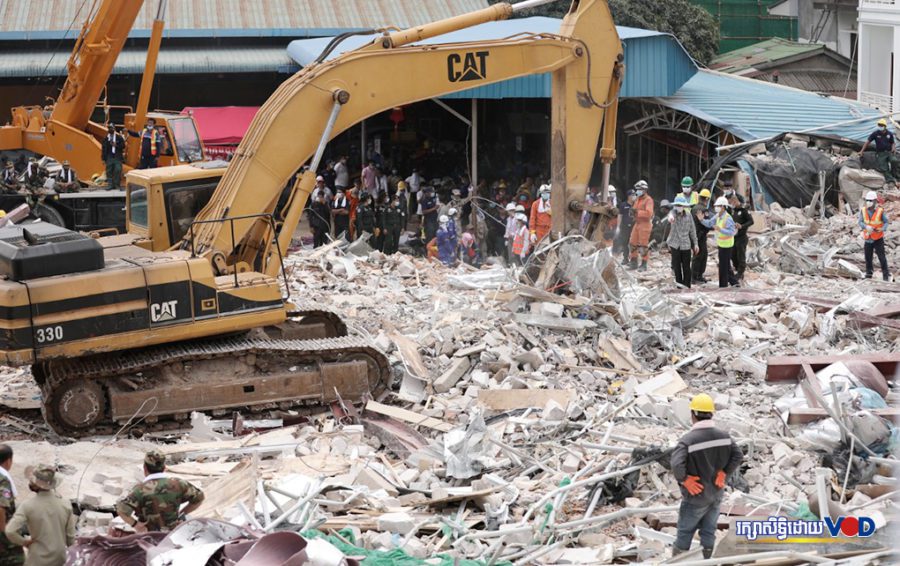 In the wake of Saturday’s fatal collapse of a Chinese-owned building in Sihanoukville, Prime Minister Hun Sen warned against using the tragedy to single out and attack the recent influx of investment from China as causing new problems in Cambodia.

“I want to publicly condemn the use of Chinese investment to make accusations that the government is a Chinese puppet,” Hun Sen said at an impromptu press conference after visiting the site of the building collapse in Sihanoukville on Monday night.

Standing near the rubble where 28 people died, Hun Sen downplayed the issues caused by casino-driven Chinese investments in the coastal city. Instead, he noted that foreigners of other nationalities also caused problems in the country.

“These are all the points that you have to use your brains to consider,” he added.

For many, the collapse in Sihanoukville was less about whether Chinese investment had value — rather, it was evidence that the Cambodian government had failed to provide basic oversight as such money poured in.

Pa Chanroeun, director of the Cambodian Centre for Applied Philosophy and Ethics, an education and research NGO, said investigations into the incident needed to focus on how a seven-story building could have been built without permission.

“The government should check, follow up with and punish any officials who colluded or took bribes and kept their eyes closed while giving their signature, because whenever there is a problem or a tragedy, those high-ranking officials are not the ones who take responsibility or get hurt,” Chanroeun said. “Instead, it is innocent people who suffer.”

Moeun Tola, director of labor group Center for Alliance of Labor and Human Rights, said the government should not be allowed to perform yet another perfunctory investigation to shift blame for its failure to intervene in this case.

It seemed unlikely that the collapsed building was the only one in the town built hastily and without proper approvals, he said, and authorities should take it as a warning sign.

“If we see that an investigation is [done] only to clean up the situation and use it as a rubber eraser to erase a bad situation, we will have a crisis in the future — meaning that if, in general, the buildings have poor quality, they will collapse one day and affect people’s lives,” Tola said.

Sophal Ear, an associate professor of diplomacy and world affairs at Occidental College in Los Angeles, said the government’s investigation had a lot of questions left to answer.

“Why have no government officials been arrested? How can anyone believe that a seven-story building could be built without government supervision? Who got the bribes?” he said. “Cambodian people already don’t trust the government!”

The value of Chinese investment in Cambodia should be assessed by how much it was improving the lives of regular citizens and not just officials, Ear said.

“As for the Chinese investment, if it is used in such a way as to bribe government officials, then it is not good,” he said, explaining that an influx of Chinese investment was unhelpful if it led to shoddily-constructed buildings and deaths of Cambodians.

However, speaking at the scene of the tragedy in Sihanoukville on Monday night, the prime minister seemed to pour cold water on the idea of a large-scale rethink of the government’s handling of Chinese investment.

“If Sihanoukville had no Chinese investors, I ask whether there would be large and tall buildings like this,” Hun Sen said. “Don’t take a small issue to light a fire … [that] destroys relations and the investment environment that we have brought in.”