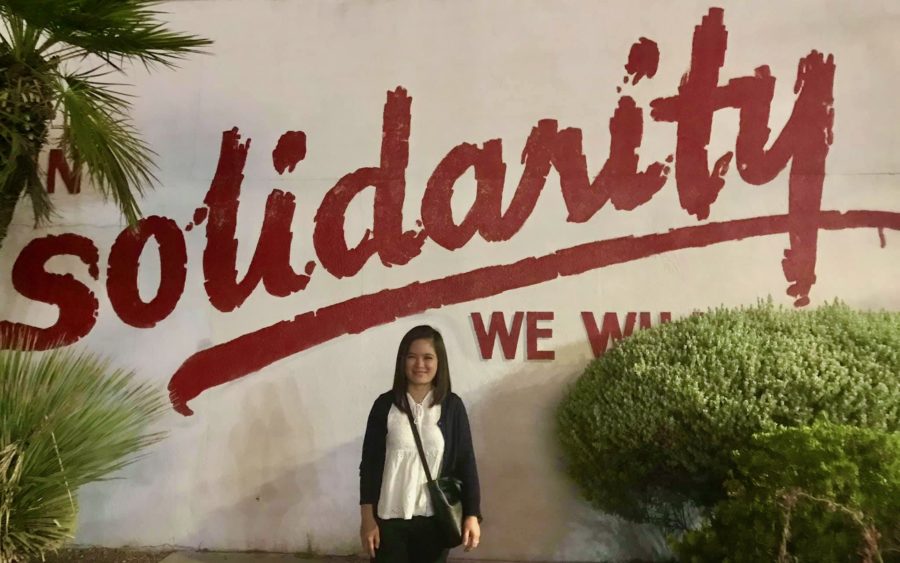 A photo of LRSU’s Chhim Sithar from August 2019 was posted by an anonymous Facebook account alleging foreign involvement in the NagaWorld strike that started on Saturday. (Chhim Sithar’s Facebook)

Government officials and local news outlets were quick to publicize dubious claims and photos posted by a now-deleted Facebook account alleging that a NagaWorld workers’ strike was instigated by foreigners — striking a similar tone to color revolution accusations made by the government in recent years.

The Labor Rights Supported Union of NagaWorld Employees (LRSU) went on strike on Saturday, alleging that the Hong Kong-listed casino firm was not addressing its concerns over mass layoffs and rights violations. As the union ended the first day of their strike, a Facebook account, which had been dormant since 2020 and had only a handful of posts, posted that foreigners had trained workers to demonstrate.

“Below are some photos and there are still many other photos where we have received training in Cambodia and overseas from foreigners to participate in demonstrations against the government,” read the text.

Attached to the post were more than a dozen photos, mostly of union president Chhim Sithar attending union events seemingly overseas and where she was photographed with foreign nationals. These photographs are publicly available on Sithar’s personal Facebook page.

Additionally, there were two photographs in the same post: one of an alleged “Japanese national” and another of a “Licadho official.” Both were made out to be foreigners who were involved in organizing the strike. The account published four other posts, one of which included photos of two local NGO staffers: Adhoc’s Yi Soksan and Central’s Moeun Tola. The accusations against them were the same.

The account disappeared Monday afternoon — but the accusations and photos had already spread through local media reports and in social media posts from government officials.

The NagaWorld union released a statement on Sunday calling for the Information Ministry to investigate fake posts circulating about the strike on social media and through news outlets, adding the union had no foreign organizers. It noted these posts were circulated by both news outlets and an Interior Ministry official.

Saran Komsath, an Interior Ministry official, had posted photos from the anonymous Facebook page and published text that decried the influence of foreign nationals in the strike.

Labor Ministry spokesperson Heng Sour separately posted on Sunday morning that women, especially pregnant women, were being made to participate in protests as part of a “color revolution tactic.” He again posted about the NagaWorld strike Sunday evening, encouraging police to take “every legal action” if they found evidence of foreign influence in the strike.

The accusations mirror rhetoric deployed by government officials over the last few years to justify charges of treason, foreign influence and of a purported color revolution against the political opposition, activists and civil society groups. A similar anonymous Facebook account, called “Kuon Khmer,” featured heavily in the prolonged trial of former CNRP president Kem Sokha, where the prosecution used similar photos and unsubstantiated claims to accuse the opposition leader of treason.

On Monday, Heng Sour told VOD that his post was more of a “general theory,” and that he was not referring to the ongoing NagaWorld strike.

“This is the general theory as we have seen is that first, in doing color revolution, there are many means and in some countries, they use the means of [using] a minor, children and so on, and some countries, they used means of using weakened women in order to attract the sympathy, and relevant authorities need to be more vigilant because if [authorities] are not careful, and if there is any incident…happens, they can make accusations [of violence] against authorities in order to ignite the anger. This is the general theory that we have to know and be careful in our practices whatsoever.”

VOD independently confirmed on Sunday that the “Japanese national,” who was allegedly a “strike manager,” is Touch Sereymeas, a 29-year-old Cambodian national who is a union member and active employee of the casino. She denied the accusations made on Facebook.

“I would tell unprofessional journalists or media that without clear sources continue to label me because I am a Khmer citizen and I am not a Japanese citizen,” she said.

The alleged “Licadho official” was identified as Gerald Flynn, a freelance journalist who frequently writes for Thmey Thmey’s English-language publication, Cambodianess. Flynn told VOD that he noticed authorities taking photos of him at the strike but didn’t expect to be “framed as some sort of foreign agent,” adding he had a press card in his pocket.

Flynn said his news outlet confirmed his role as a journalist to Fresh News and asked its editors to remove the photo. He also discussed the issue with the Overseas Press Club of Cambodia — both Flynn and one of the reporters on this story are board members of the OPCC.

“Frankly, I was and remain frustrated,” he said in a message. “It would have been very simple for authorities to check whether I was a journalist or a LICADHO employee and it highlights the lack of professionalism at Fresh News and the other online outlets that republished my photo without bothering to run even a cursory fact-check.”

Naly Pilorge, director of human rights group Licadho, said the NGO was monitoring the strike but was not involved in organizing workers. She emphasized that this was a legal strike by workers, and attempts to frame it as a color revolution was a “transparent attempt to deflect attention from the very real, very serious abuses and unfair labor practices that the workers of LRSU are protesting against.”

“The disingenuous and false labeling of standard collective bargaining actions as a ‘color revolution’ is the latest in a long line of government officials maligning and misrepresenting peaceful assemblies, independent journalism, NGOs and opposition political activity,” she said.

Yi Soksan, who is a rights monitor at Adhoc, was one of the “Adhoc 5” staffers jailed in 2016 for allegedly “bribing a witness” when investigating a case involving an alleged mistress of opposition leader Sokha.

Soksan said he was monitoring the strike for potential rights violations and compared the accusatory social media posts to the Khmer Rouge era, where leaders accused and killed people for their perceived associations, real or false.

“For myself, I also faced challenges and had been imprisoned because of being framed and unreasonable accusations, [but] we will still work the same.”

Sebastian Strangio, the author of Hun Sen’s Cambodia and a journalist previously based in Phnom Penh, said the Cambodian government had started to label any social movement, be it for labor or political rights, as a “puppet of foreign interests.”

“At this point, it seems like a reflex response of the FreshNews/CPP media complex to reach for the phrase ‘color revolution,’ even in the case of protest actions that are clearly motivated by local demands and concerns,” he said in an email.

Strangio said this was the first time he heard the color revolution charge being used for a labor dispute, and that while union organizers may receive funding or training from Western union organizations, like the AFL-CIO, the notion that workers’ demands are coming from foreigners was “clearly absurd.”

“I think this speaks to the ruling elite’s paranoia about any potential mobilization of the country’s new industrial working class, as well as a desire to prevent any disruption to the interests of capital in Cambodia,” said Strangio.