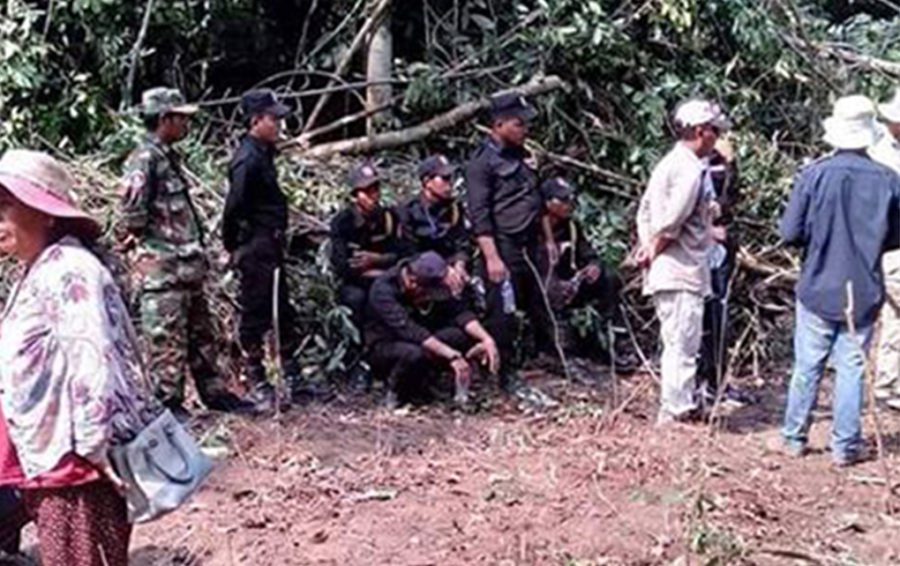 The security of Chinese Company, UDG has prevented local authorities and communities from filling their roads and bridges in Prek Khsach commune, Koh Kong province. Image: Given

Residents living around the $3.8-billion resort project by China’s Union Development Group (UDG) say they are worried for their safety after even their Cambodian People’s Party commune chief has now been summoned for questioning over a dirt road they were building.

The UDG development in Koh Kong province’s Kiri Sakor district, which has recently been subject of rumors that it may be a secret Chinese military base, has been plagued by years of unending land disputes due to its displacement of locals. Most egregiously, UDG has even been accused of hiring soldiers to harass residents.

Rom told VOD that he would attend the questioning but denied he had any personal disputes. He said he believed the case was likely related to threats he said were made by UDG on April 8 to file a complaint against him over a 200-meter dirt road that was being built by his constituents through land now claimed by UDG.

Yet he denied leading his constituents in the effort and said they acted alone.

“If I am charged with joining hands with the people, I have documents to prove that it was the people who requested to build the road,” Rom said, claiming that he tried to follow the appropriate processes but was undermined by his constituents.

“The people did not listen and they did it. When they did it, they did not tell me. I was busy with my brother’s wedding.”

However, one of Rom’s constituents, Tith Ten, said the commune chief did in fact help the residents in their disputes with UDG and that many residents would gather on Friday to support him while he is questioned in a show of solidarity.

“We will support him because he is very fair,” Ten said. “The commune chief in this mandate is good with the people. Whatever we do, he always follows up and helps us with everything such as when the company’s security guards came down to the local community and did things improperly. He comes to help us.”

According to the summons letter, the military police received a complaint about a case on April 10 that said security guards for UDG had two days prior prevented about 50 people from the community from trying to build the dirt road. The residents were trying to dig out a 200-meter dirt stretch to link their community to the main road to make it easier to travel to local population centers and markets.

Khemra, the chief of the provincial military police criminal office who summoned Rom, denied the commune chief would be questioned on the subject of the road and said he was being called as a witness in a different case related to UDG.

“It’s related to that land case — [but] related to a case of threats and is because he knew about the case. He was not involved. But he knows about it,” Khemra said, before declining to elaborate on the alleged threats. He referred further questions to provincial prosecutor Ros Saram, who could not be reached for comment.

Hour In, a monitor for local rights group Licadho in the province, said if provincial military police officials were in fact now calling commune chiefs for questioning over the UDG dispute it was a new level of intimidation in the ongoing saga.

“The commune authorities supported their people in building the road but then this is turned into being called for questioning. I think it is intimidation — and it is not encouraging for commune officials who have a will to serve the people,” In said.

UDG received a 36,000-hectare concession in the districts of Botum Sakor and Kiri Sakor from the government 11 years ago to develop an international standard business center and tourist resort over five stages of five years each. It received a further 9,100 hectares in 2011.

The land concession impinged on 12 villages inhabited by more than 1,000 families, according to a 2012 U.N. report. But UDG and government officials have slowly whittled away holdouts over the years — in many cases offering them barren stretches of nearby land in exchange for their promises to drop their claims against the company in the coastal area.

Correction (May 28, 2019): A previous version of this story stated that only 200 families were affected by the UDG development.