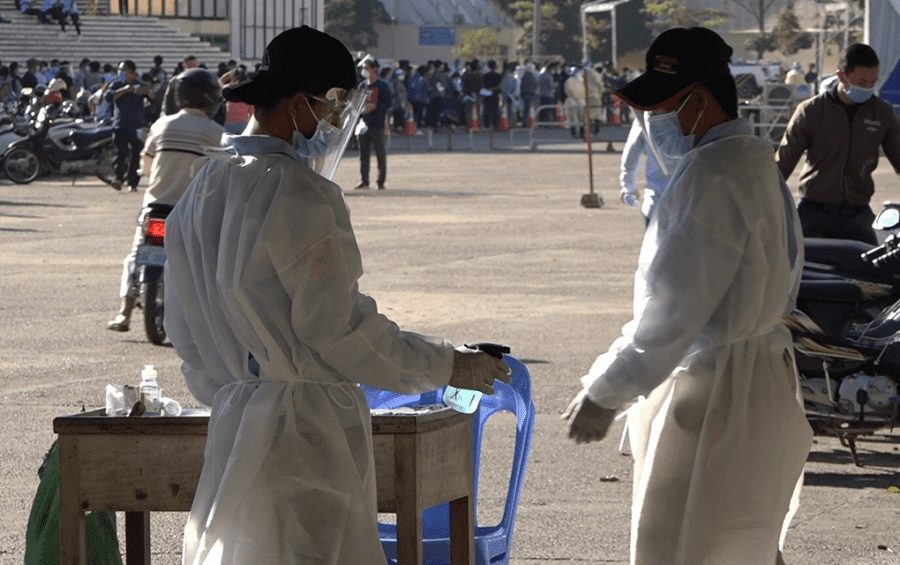 Locked-down casinos in a Kandal province commune have seen more than 100 Covid-19 cases, including 64 new ones on Friday, but the commune chief said the danger is sealed off from the rest of the community.

According to the Health Ministry, 61 of Friday’s cases in Koh Thom district’s Sampov Puon commune had tested positive on their second tests, while the other three were found to have Covid-19 on first tests. All 64 are being treated at a makeshift hospital at the Yong Yuan casino, the ministry said.

Ouk Sron, Sampov Puon commune chief, said the six casinos in the area, near the Vietnamese border, had all been locked down with staff inside.

After two rounds of testing, more than 100 people were found to have Covid-19. A few hundred staff were allowed to leave the premises on Thursday after being cleared, but over a thousand are still in quarantine, Sron said. Testing them all was not a simple process, he said.

The 64 new cases on Friday were made up of 29 Chinese nationals, 27 Cambodians, seven Vietnamese and one Thai patient, according to the Health Ministry.

“It is only people in the casinos. For people in our community it is OK,” Sron said. “It’s better now because the places and people that we had suspicions about Covid infections we’ve checked and they are negative.”

The man had a fever and cough for about three to four days before going to the hospital, the ministry said.

He arrived at the Khmer-Soviet Friendship Hospital around 3:30 p.m. on Thursday panting. He was immediately put on a ventilator but died in half an hour, the ministry said.

A Covid-19 test result for the man came back positive around 11 p.m., the ministry said.

Prek Luong commune police chief Yin Mony said the man was a Phnom Penh traffic police officer who was staying in the commune. Travel in the area had now been restricted, he said.

“We are very concerned about his death. … The governor and commune chief decided to close the market,” Mony said. “We do not know where he was infected.”

“We are concerned about those who are receiving treatment,” Kim Khoeun said, adding that he did not know the exact number of officers now in quarantine.

“There are many, and I do not have the time to calculate it,” he said. The force also did not know the source of the infections, he said.

The Health Ministry announced 96 total new cases on Friday, including 20 in Phnom Penh, one in Svay Rieng and one in Tbong Khmum, as well as 18 recoveries.