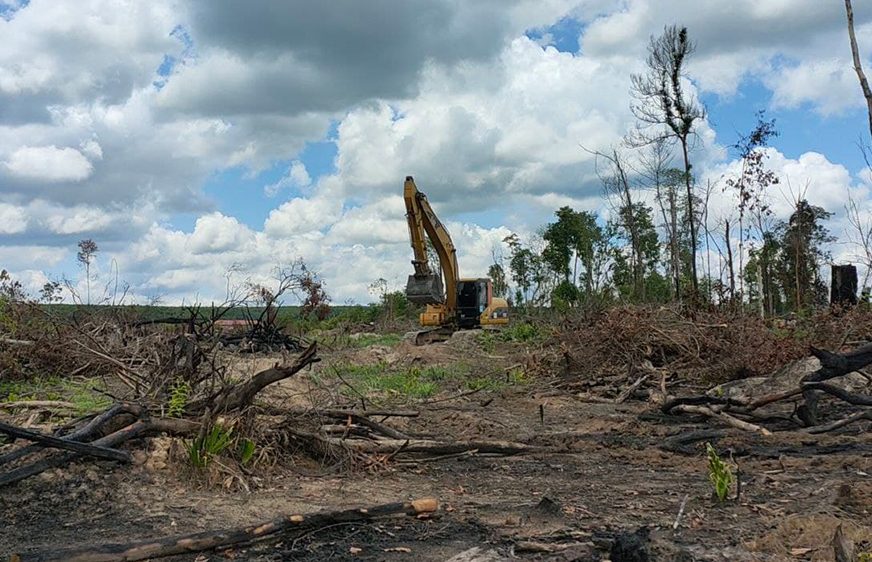 An excavator clears land in Preah Vihear’s Rovieng district, Romany commune on May 23, 2021, in an area of significance to indigenous Kuy communities and ancient Angkorian ironworks. (Supplied)

Se Lina, a foreman for the clearing, said on Monday that the area would be turned into an agroindustrial rubber plantation, though he declined to name the company in charge.

The plot, in Rovieng district’s Romany commune, had already been cleared, but it had not disrupted the archaeological site in the same village, Lina said.

Culture Ministry spokesperson Long Bunna Sireyvath said the site had been used for iron production during the Angkorian era, and would be protected.

“That station, we have registered [it] in the heritage list of our nation’s ministry, and it is protected by law,” Bunna Sireyvath said. “That location was a location for processing iron, according to research, and that processing was for producing weapons for the Angkorian king.”

He added that the ministry had signed a deal with a university in the U.S. state of Illinois for 2018-2023 to study historical ironworks ovens in the area.

Archaeologist Thuy Chanthourn said he had researched the ancient ironworks since 2010.

They were the Angkorian empire’s primary industry and the largest in Southeast Asia, and drove the empire’s prosperity and development, he said.

“If there was no iron, there would be no Angkorian empire,” he said, adding that the industry spanned several contemporary provinces.

He urged that the archaeological evidence be preserved.

“Keeping land of 100 to 200 square meters doesn’t cause the loss of anything, [but] for the uneducated clearers and the owners of the company who don’t find out what is historical evidence, it can make our country lose its history, through people who don’t know the value of their own cultural and historical evidence,” Chanthourn said.

Hok Leng, a local indigenous Kuy resident, said the clearing had started at the end of last year with heavy machinery. He and other Kuy were concerned about the loss of the historical site, known as Sanlong Sladek, he said.

“The authorities have visited many times,” Leng said. “They stood to protect the company to make the clearing and never stopped [it].”

“It must maintain the land in that area because the community still believes in the site as a sacred place,” he said, adding that the land had already been completely transformed.

Lor Chan, Preah Vihear coordinator for human rights group Adhoc, urged that authorities take back the land to preserve both its history and importance to local people.

“Because the area has been an archeological site since their ancestors, the authorities must take action against the offenders to warn them to avoid violating the archaeological site and areas that indigenous people rely on,” Chan said.

Deputy district governor Tes Sam Ath said that after receiving complaints, the district administration was asking for documents from both parties to review the case.

Reporters have not been able to reach a company responsible for the development.

According to the villagers, 33 Kuy families rely on about 60 hectares in the area as cyclical farmland.