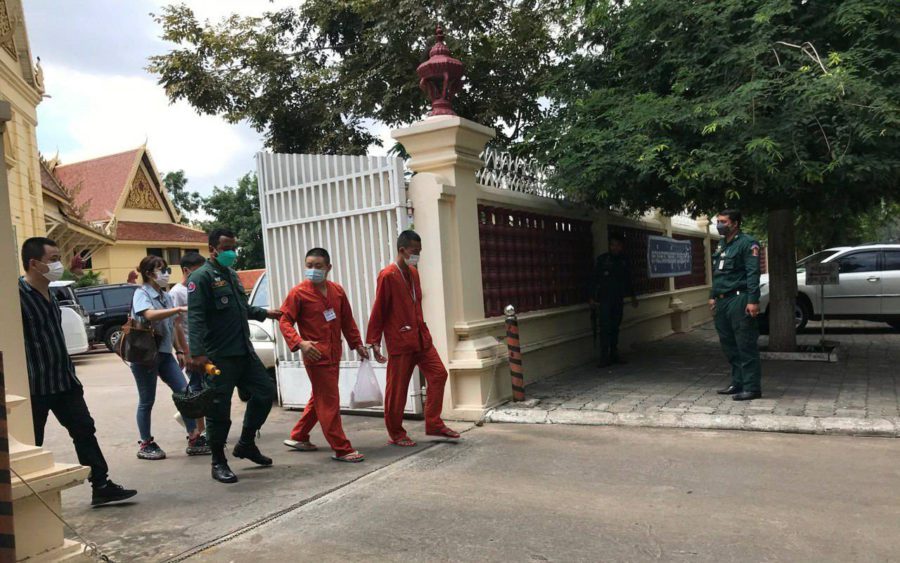 Prum Suos Samang, right, walks out of the Supreme Court after his hearing on October 20, 2021. (Ouch Sony/VOD)

A Battmabang man initially convicted of killing his wife and sentenced to life in prison denied the murder and asked the Supreme Court to release him and find the real killer.

The man, Prum Suos Samnang, was sentenced to life in prison in 2019 for the premeditated murder of his wife, Ouch Chantha. The couple had a 14-month-old baby at the time. The 29-year-old woman was found dead in Battamabng’s Samlout district at 5 p.m on December 16, 2019, according to court documents, with marks around her neck suggesting she had been tied with a rope.

In court on Wednesday, Samnang admitted to having used drugs. And during previous questioning at the provincial court, he admitted that he tended to claim while drunk that the child was not his but that of a previous boyfriend of the victim, and that he was jealous, according to a court document. But he denied the murder in both hearings, saying he was not at the scene of the crime.

While the provincial court convicted Samnang, the Appeal Court vacated the conviction earlier this year, after which the plaintiff and woman’s mother, Soma Thea, and the prosecution filed an appeal with the Supreme Court.

The prosecution and defense presented divergent narratives on Samnang’s whereabouts the day of the Chantha’s death.

Defense lawyer Ly Sovanna said that Chantha, a teacher, was at school on December 16 from 8 a.m to 11 a.m. However, the investigation concluded that she had been murdered between 8 and 8:30 a.m., which contradicted reports that the victim was seen alive till 11 a.m.

He added that the lower court had also taken into consideration Facebook posts by Chantha expressing disappointment with her husband’s drinking and nightly socializing, and used these as grounds to make him a suspect.

He asked that the Appeal Court’s decision be upheld because the current hearing had no reasoning or standing.

“It is true that the victim’s family feels hurt but the accused also feels hurt if this sentence is not based on legal grounds and … the family and victim’s soul will not rest in peace,” Sovanna said.

Prosecutor Duch Kimsorn said the evidence and police report matched, and painted a picture of murder. He added that Samnang did not have a clear alibi for his whereabouts at 10 a.m. the day of the murder. He also pointed to evidence of arguments between the couple, but did not elaborate on how this proved Samnang’s guilt.

He claimed that Samnang intended to hide the truth, and had shown no remorse after his wife’s death, and that the case should be sent back to the Appeal Court for a retrial.

Absent from court, a clerk read out a statement from the victim’s mother Thea, which said that it was unjust for her daughter to die as a new mother and said that evidence in the case had been sidelined by the lower court.

“It is a decision that did not consider witness testimony and the report of the judicial police. … It is a decision based on an excuse from the accused,” her statement reads, referring to the Appeal Court decision.

When it was his turn to speak, Samang kneeled down and prayed in respect to the judges before he was questioned. Samnang admitted to being an occasional drug user but that they had a happy marriage without any violence.

“I would like the court to find justice for my child [because] my wife died in a tragedy and the perpetrator should be found, arrested and punished,” Samnang said.

Presiding judge Khim Pon is scheduled to issue a judgment on November 3.